Coolest Retard was one of the more comprehensive punk zines to come out of the Midwest. Some of the coverage was a bit dodgy in a "new wave" way, and the ghetto-ization of the nascent hardcore coverage reeked of condescension to my teenage eyes. What snagged my interest at Tower Records was its pro-Black Flag coverage (no doubt influenced by the return of the Effigies back to their Chicago mothership). The review of Damaged below states that "it's so hard to put a Black Flag record or show into words." I also would have noticed the contemporary reviews of Bad Religion, Huskers, Hell Comes to Your House, Wild in the Streets and the Misfits live - all bought and listened to obsessively in real time. Did I really sell back my post '74 Who lps to get store credit to get some of these. I only managed to put my mitts on one copy of Coolest Retard in real time which is the May/June '82 issue excerpted below. Did all those records come out in such a short, six month time frame? A GREAT time period for American music for sure given all the Vegas punk from the UK being churned out and covered in the US zines for some reason. It seemed that any band on Punk & Disorderly could come out to LA and headline Godzillas. Gun Club coverage is pretty fascinating to see how they were received outside of LA. Record collector rock ("RCR") is maligned for some reason. The Cramps and the Gun Club are progenitors of two strands/genres of music that one could say did not exist previous to their existence and is in part due to their record hound excavations. See also John Fahey, Tim Gane and Thurston Moore for similar RCR genre-creation. Medals all around.

There are some great quotes from JLP. Fer instance:

"I can't stand [45 Grave]. It has nothing to do with Rob [Ritter]. I just think horror rock is a waste of time." Three words come to mind on looking back when I saw JLP live: Screaming Lord Sutch.

"[The Fire of Love] is not produced well enough. Not enough balls." Uh, thanks Chris and Tito. I kinda remember Danzig saying something along the same lines with Walk Among Us though probably he insinuated using violence. Best representation of either band IMHO.

"I knew [Kid Congo Powers] before the 'punk rock thing'."

"[Chis Stein and Debbie Harry] knew me before any bands." True though a nice understatement JLP - you were Los Angeles PRESIDENT of the Blondie fanclub c. 1977. Thank you Chris and Debbie for Animal Records and Miami and The Las Vegas Story. Not unlike the patronage of Ocacek on the Bad Brains and Suicide. At least they tried. 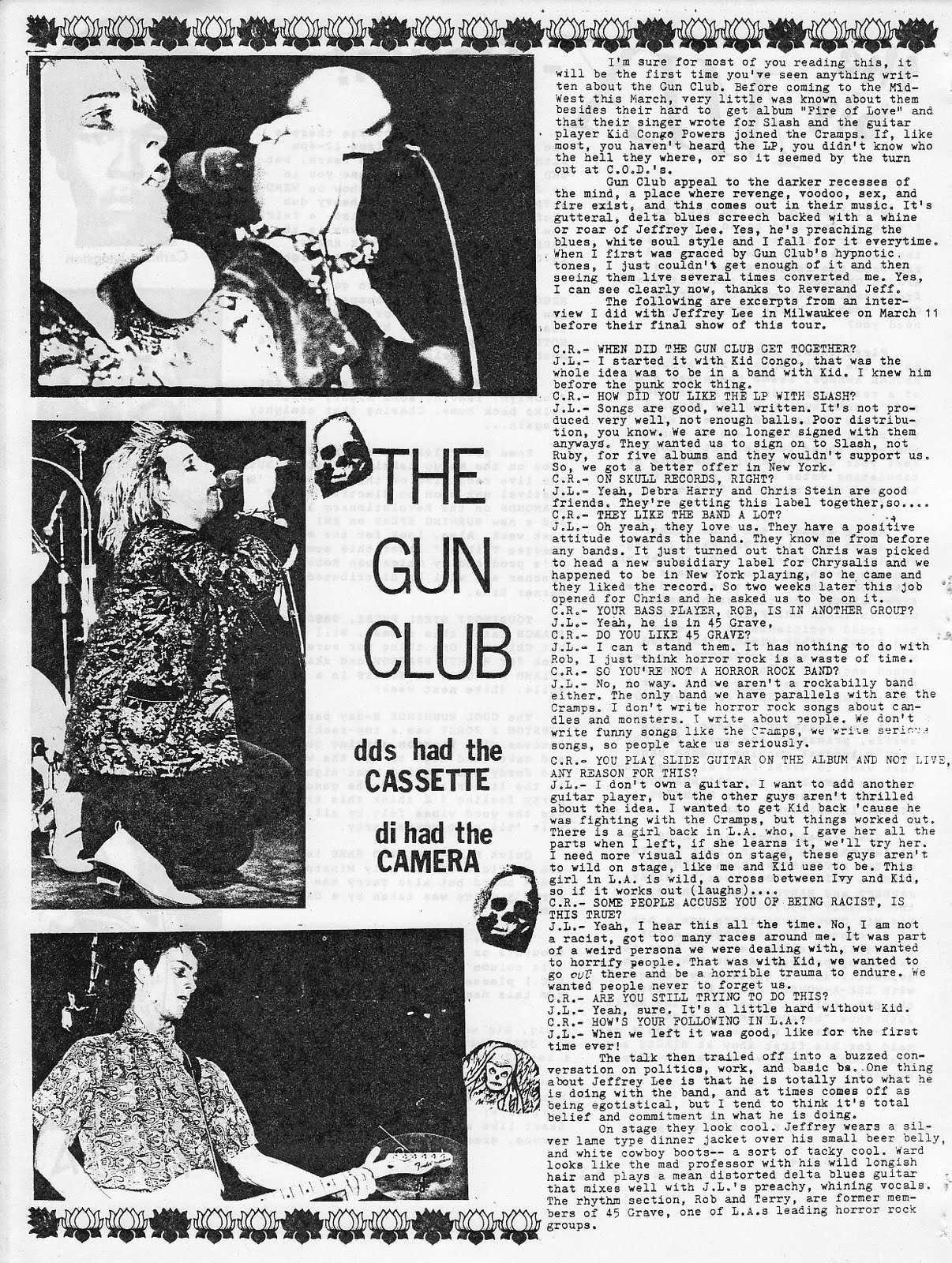 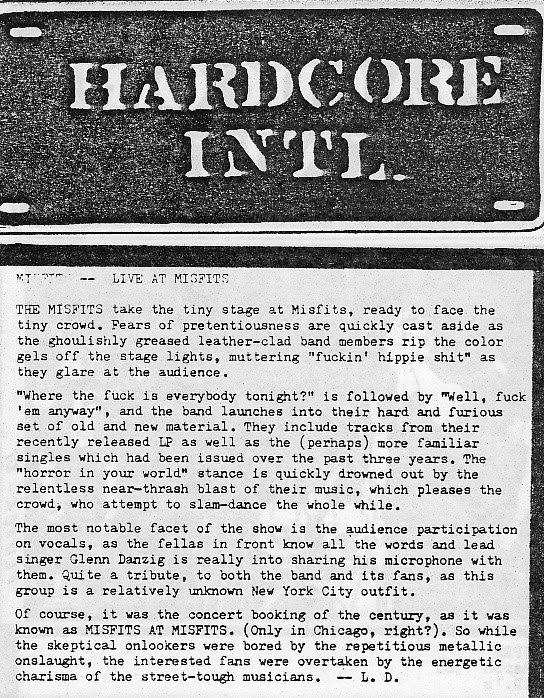 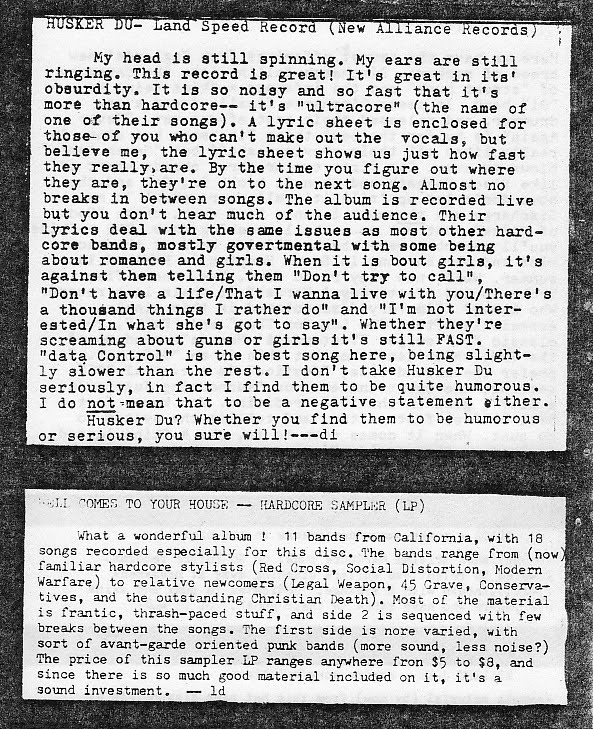 Lastly, a excerpt from a Black Flag interview in an earlier Coolest Retard from 1980. I am guessing the same tour that gives us the great Flag rehearsal photo on a Chicago day off - what a work ethic - on the second edition of the essential Rock and the Pop Narcotic. I would have liked to have been a fly on the wall the first time Dez and Chuck got to rap with the Kirkwoods and Bostrom over their shared affinity for the great Tres Hombres lp. Also, some interesting comments on their influences and early LA scene:

JOHN: Do you guys consider yourself a second generation band from LA?
GREG: No, well that may have been kind of how it worked out. We've been aroundfor a long time. Since it had started in LA. We come from the suburbs of LA and we were kind of shut out of the scene in the city.
CHUCK: You weren't a punk if you're from the suburbs.
GREG: They wouldn't give us gigs.
DEZ: We were written up in all the LA magasines when all the second generation bands were getting written up--doesn't mean you're a second generation.
GREG: We were around since early '77.
DIANE: Who would be considered a first generation band and who would be considered a second generation band?
GREG: In LA? The Weirdos would be first generation. The Zeroes, the Germs, the Bags.
KAREN: Are they still together?
GREG: Some of them are.
JOHN: If you were looking for converts. What kind of crowd are you looking to play for?
GREG: We think everybody should be subjected to us, if they like it or not. A lot of bands and people have an attitude of, "OK we're going to have our little crowd here and we're gonna keep certain people out...We're gonna have our own private club," and that's bullshit. Everybody should be dragged in and subjected to it. Go out and make an effort--hitting people on the head, whether they like it or not.
DEZ: For years and years they've been saying in LA that our scene is this and our scene is that.
GREG: Allow everyone in.
CHUCK: That's just like a bogus punk attitude they have in LA which I think is garbage. If the band is for change, then they can have an effect in varying degrees on all kinds of different people. If you're gonna change anything you're not gonna by sitting in your living room, no matter how big it is.
GREG: For example, this club here is great right now. No age limit.
JOHN: How long is it going to stay like that?
GREG: Well now you see.
DEZ: That's what kept it alive from where we're from.
GREG: That's important if someone in Chicago should make sure there's a place without an age limit that anybody can go to. No restrictions, you don't have to look a certain way. Open to any kind of taste which means putting up with some assholes.
JOHN: Do you think a lot of energy you have up on stage is put down on record the way you like it?
GREG: We think it's been done good on record and it could be done good on video.
JOHN: What kind of bands did you listen to before you got into this?
CHUCK: Years ago, I use to listen to Black Sabbath, Iggy Pop all kind of bands
DEZ & GREG: All kinds of bands.
CHUCK: Alice Cooper
CHUCK & DEZ: ZZ Top
DIANE: What do you think of them now?
GREG: We like them. Ha. Ha. Ha. We don't have to agree with their stuff to listen to their records.
JOHN: Would you buy their latest stuff?
GREG: No, like Iggy Pop, people should listen to his early stuff. Raw Power. Fun House. Metallic KO. I Got a Right. Since then he's got really burnt out stuff out. It's kind of a sheme alot of people would consider Iggy Pop by his later stuff.
CHUCK: It's an excuse for new wavers to be like that. He still has some type, sort of personality.
KAREN: Reminds me of Johnny Thunders.
GREG: Someones who's off in that kind of quasi-adult burnt out world. He can support that fantasy. People are captivated by his personality rather than the emotion he use to put out.
DIANE: A lot of press releases that I've seen said you were coming here "straight from the Tomorrow Show" like that's your only claim to fame. What do you think of that?
CHUCK: That was ten minutes
GREG: The promoter, I guess, picked up on that. It has very little effect on people coming to see us.
CHUCK: It was just me speaking my mind.
GREG: It was not something we went out to do. They asked to talk to us and said they have the best intentions.

Review of MX-80 Sound's classic "Hard Attack" in real time from NYC, USA circa 1978. Issue Number Three from the barn archive of J. Gorton's Beat It! Heavy Stiff Records/pub rock coverage but also great NYC punk coverage as well. That is Eddie and the Hot Rods singer Barrie Masters in the middle of the review. The MacManus cover is a bit misleading as there is a more rockist angle to the whole zine than the cover would indicate. Handwritten note on the back cover indicates a run of 300 copies. There is a mention of a Mumps television news clip (with photo stills in the article from a TV set - those were the days) that I have been trying to track down for a couple years with no luck. 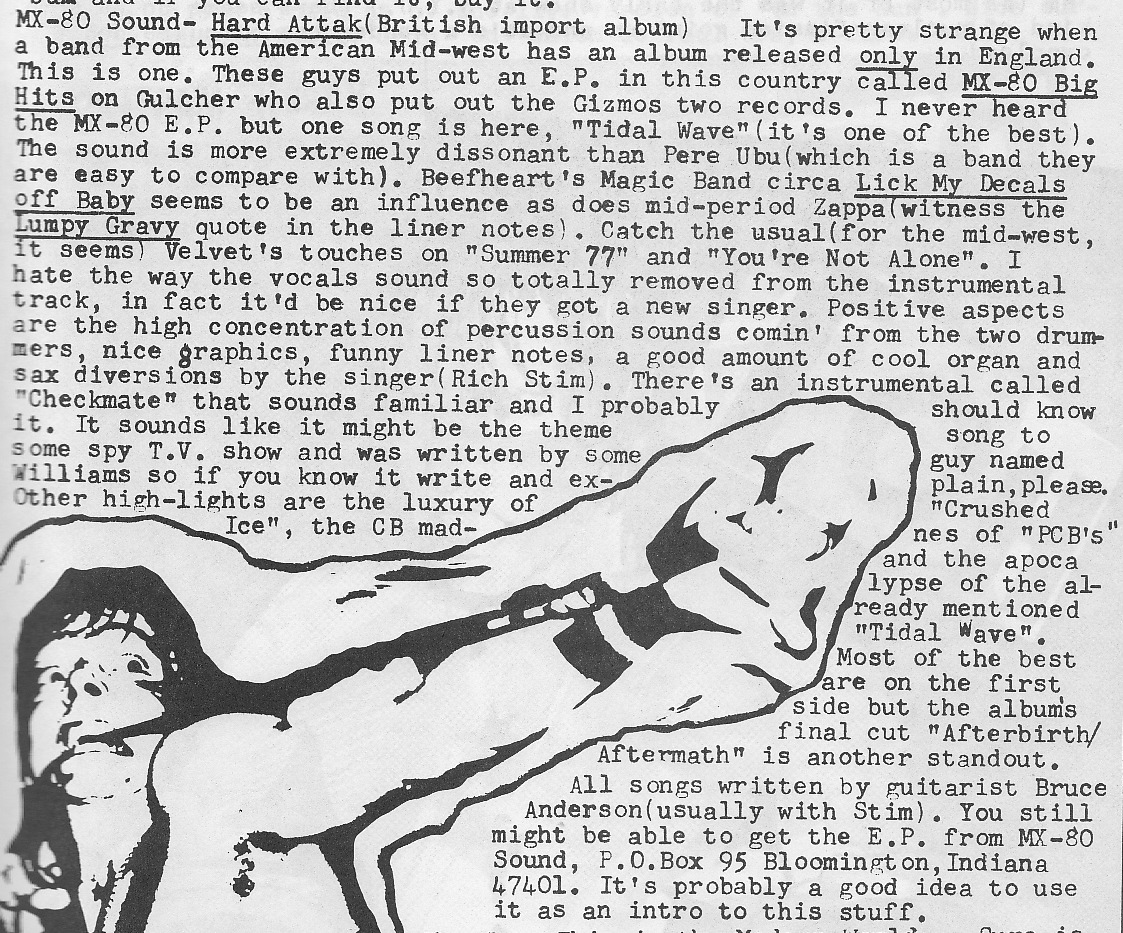 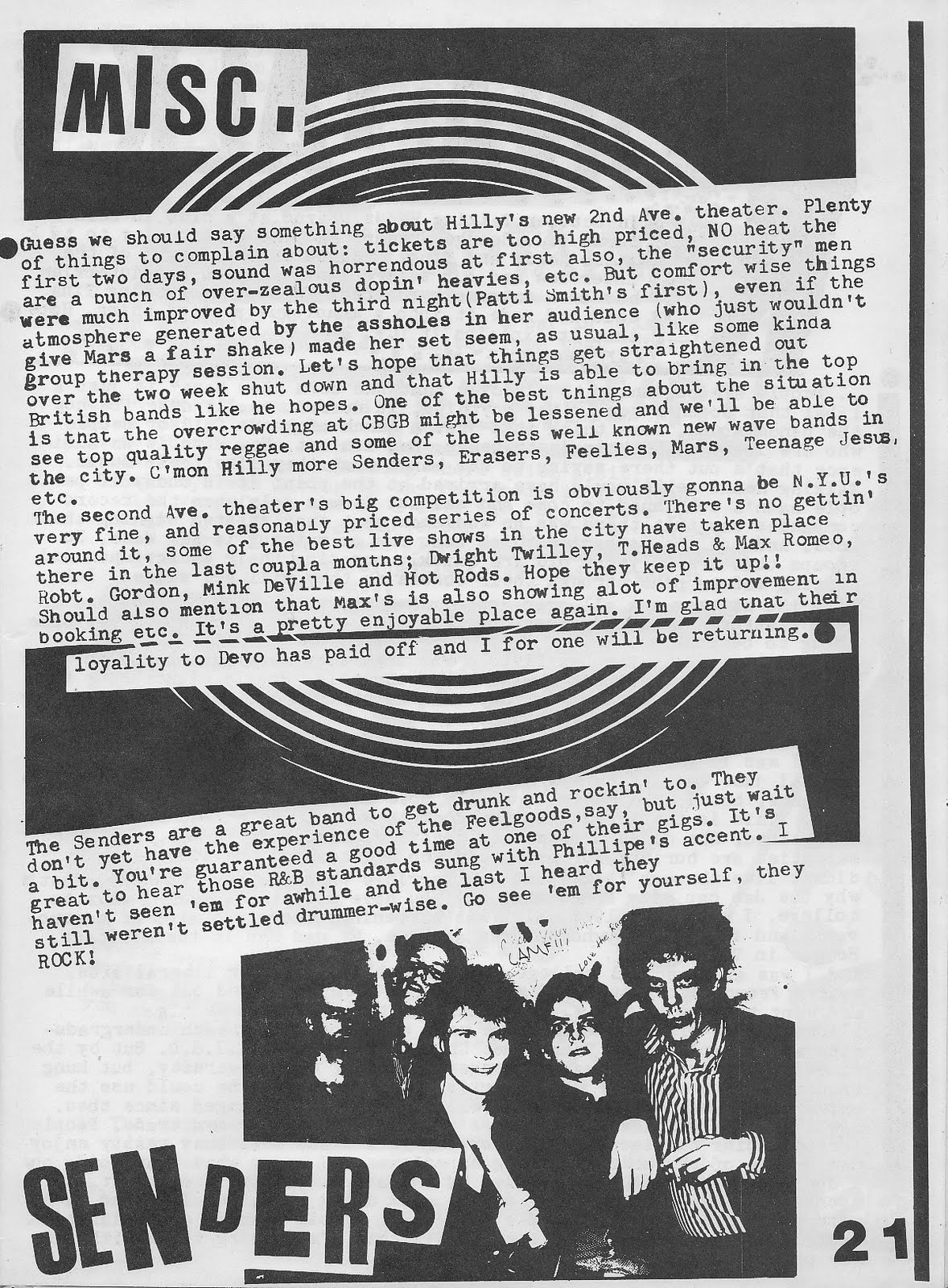 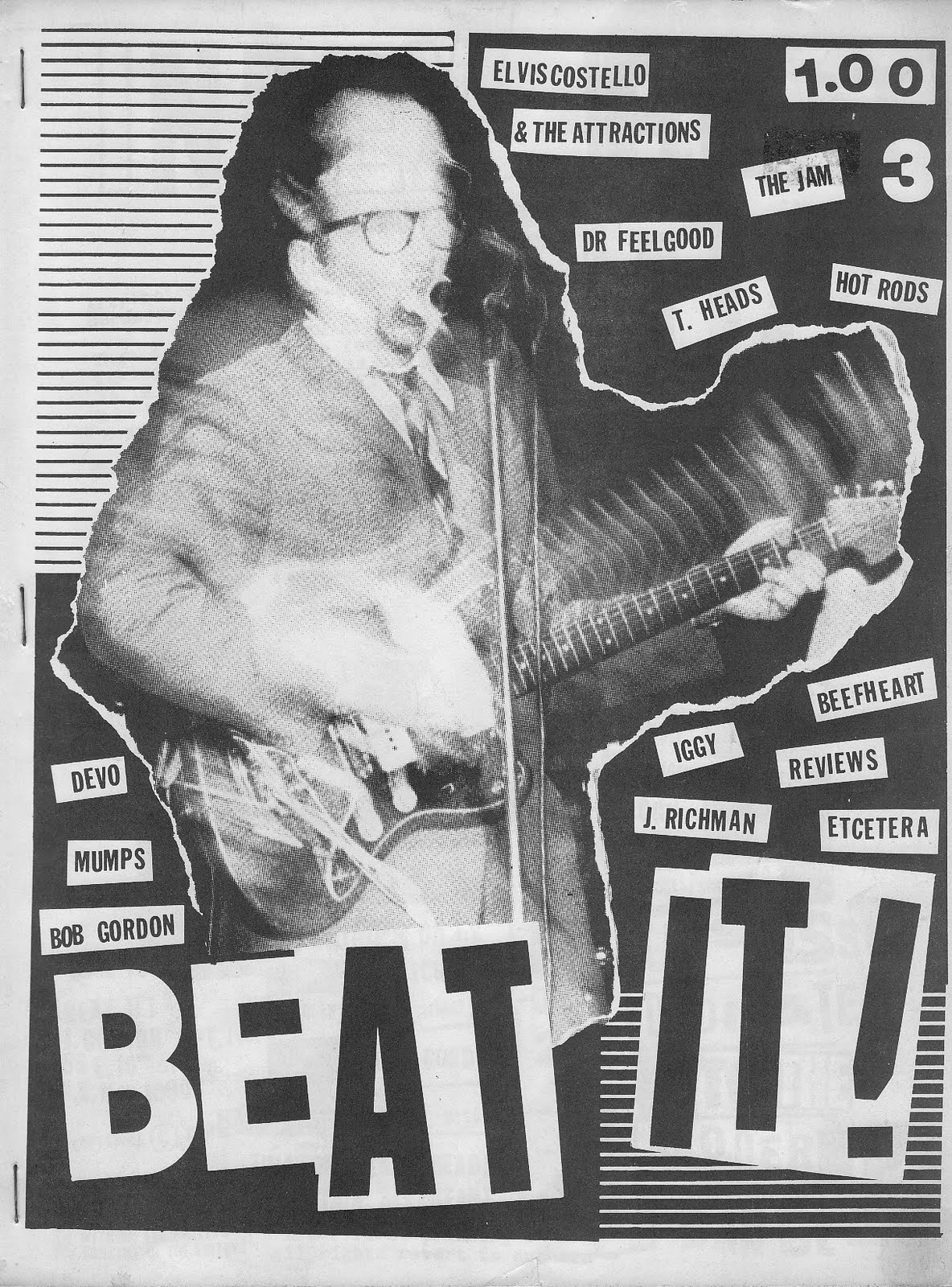 A much needed re-post of the great Rich Stim Esq. "rock star" ad from an old Gulcher in the barn. Other than the waaay, way off comment re Rich's vocal abilities - one he hopefully cringes at in 2011 - Gorton really nails the review without having heard the "Big Hits" ep at the time he reviewed the lp. Beefheart, Beefheart, more Beefheart, with a little VU, humor and some Lumpy Gravy. C'mon, in my mind, Stim's vocal styling is droll, sleepy, funny and laconic all at the same time. Try that on for size. "Catch the usual (for the mid-west it seems) Velvet's touches on 'Summer 77' and 'You're Not Alone." 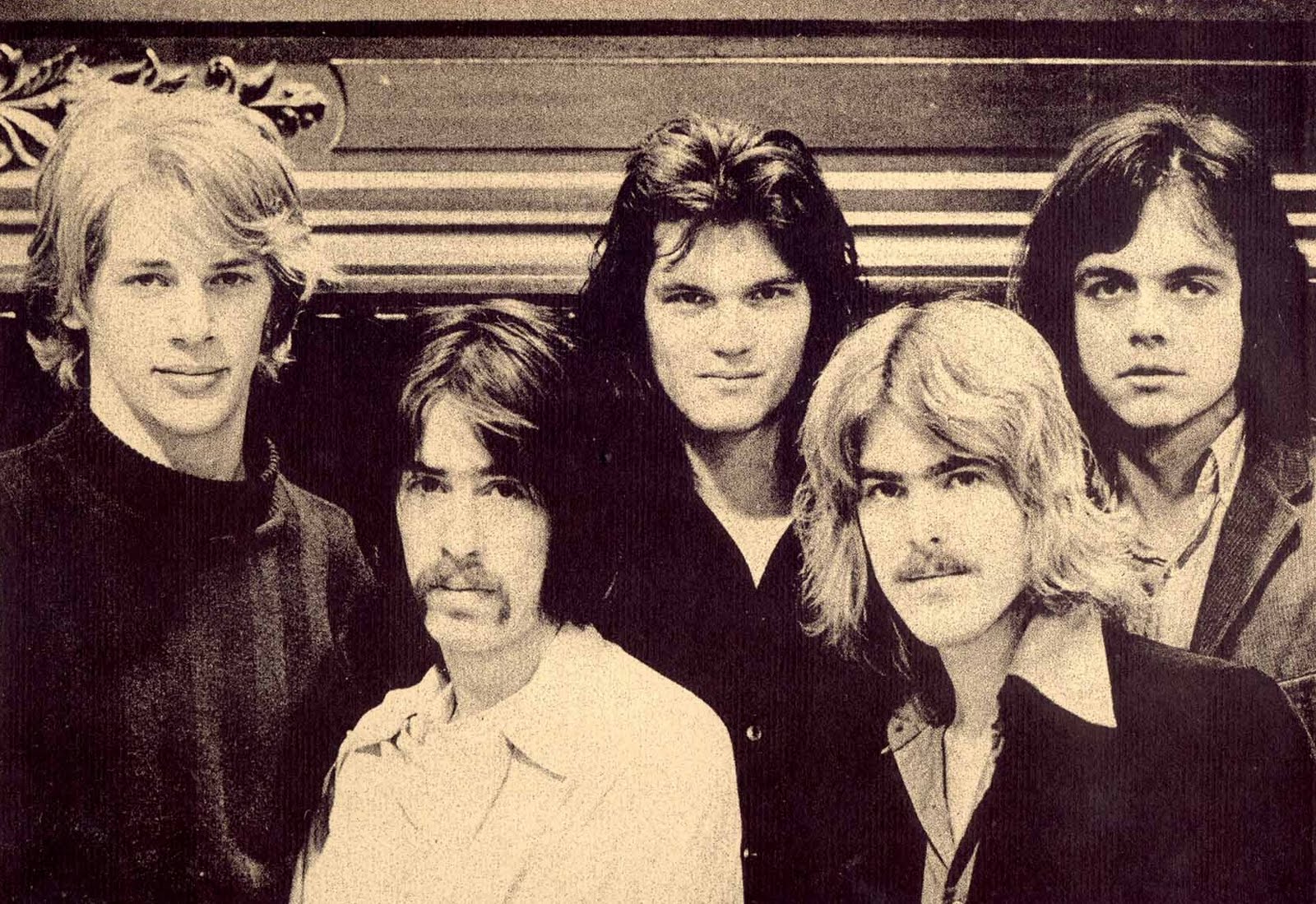 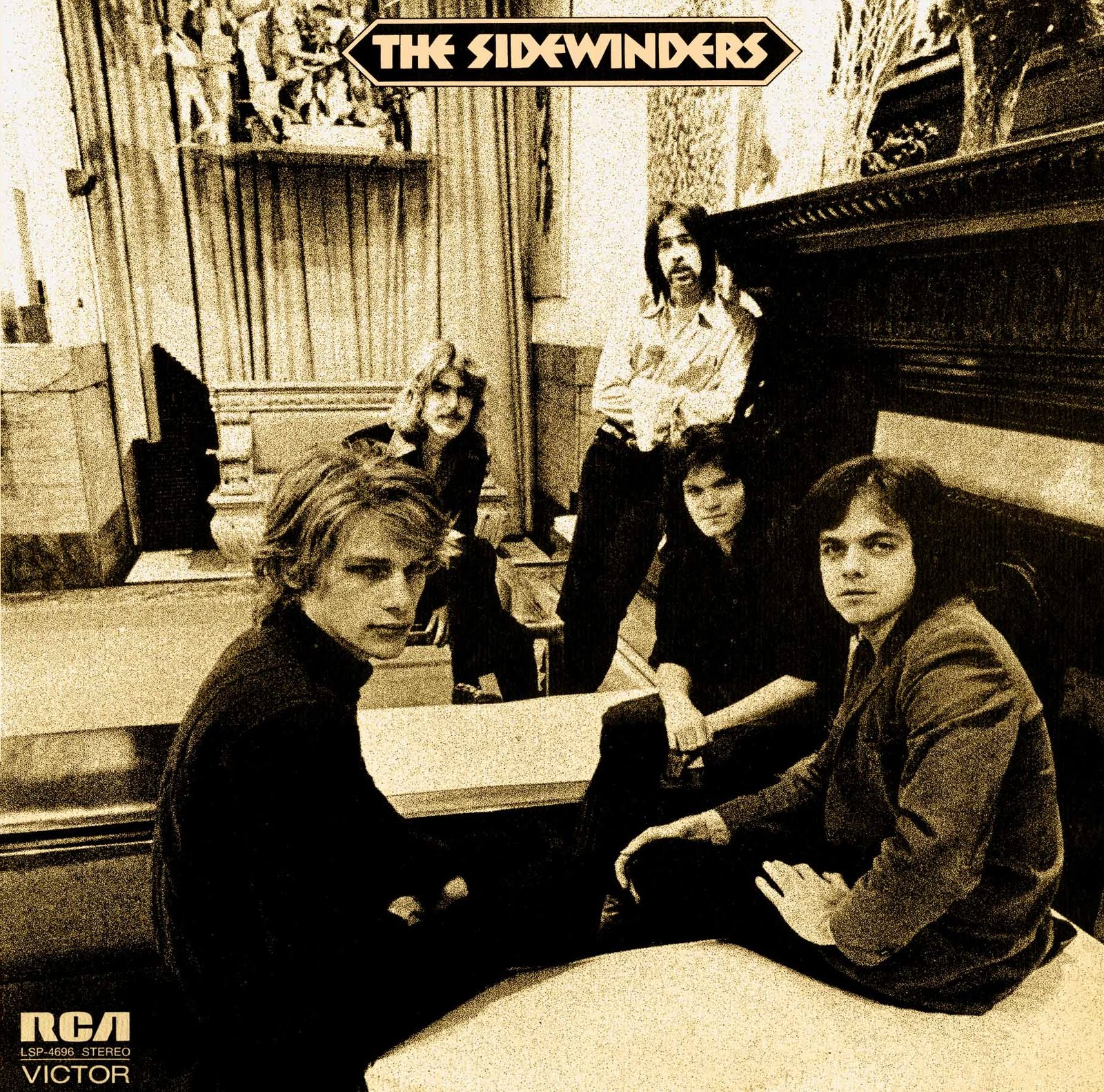 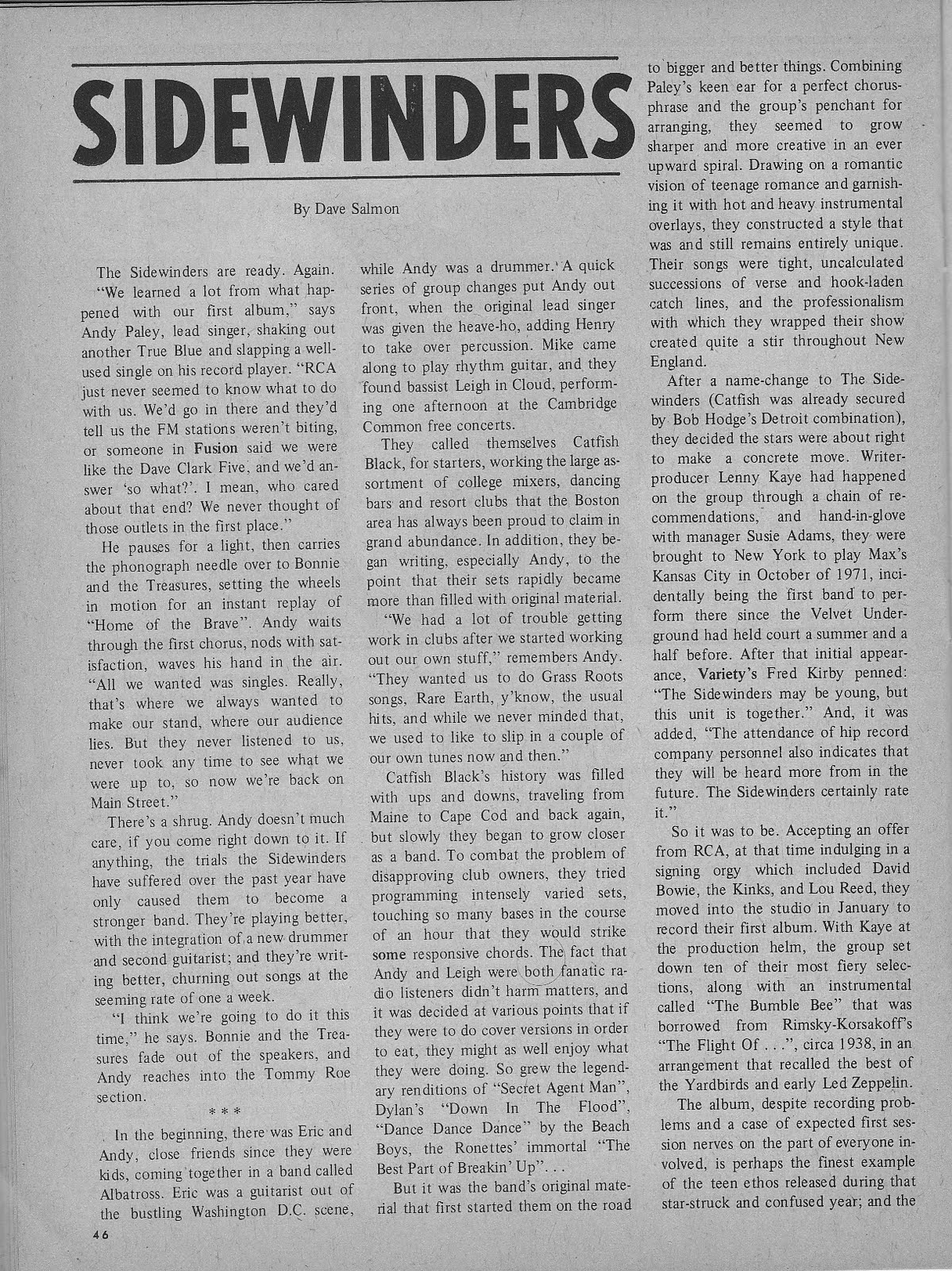 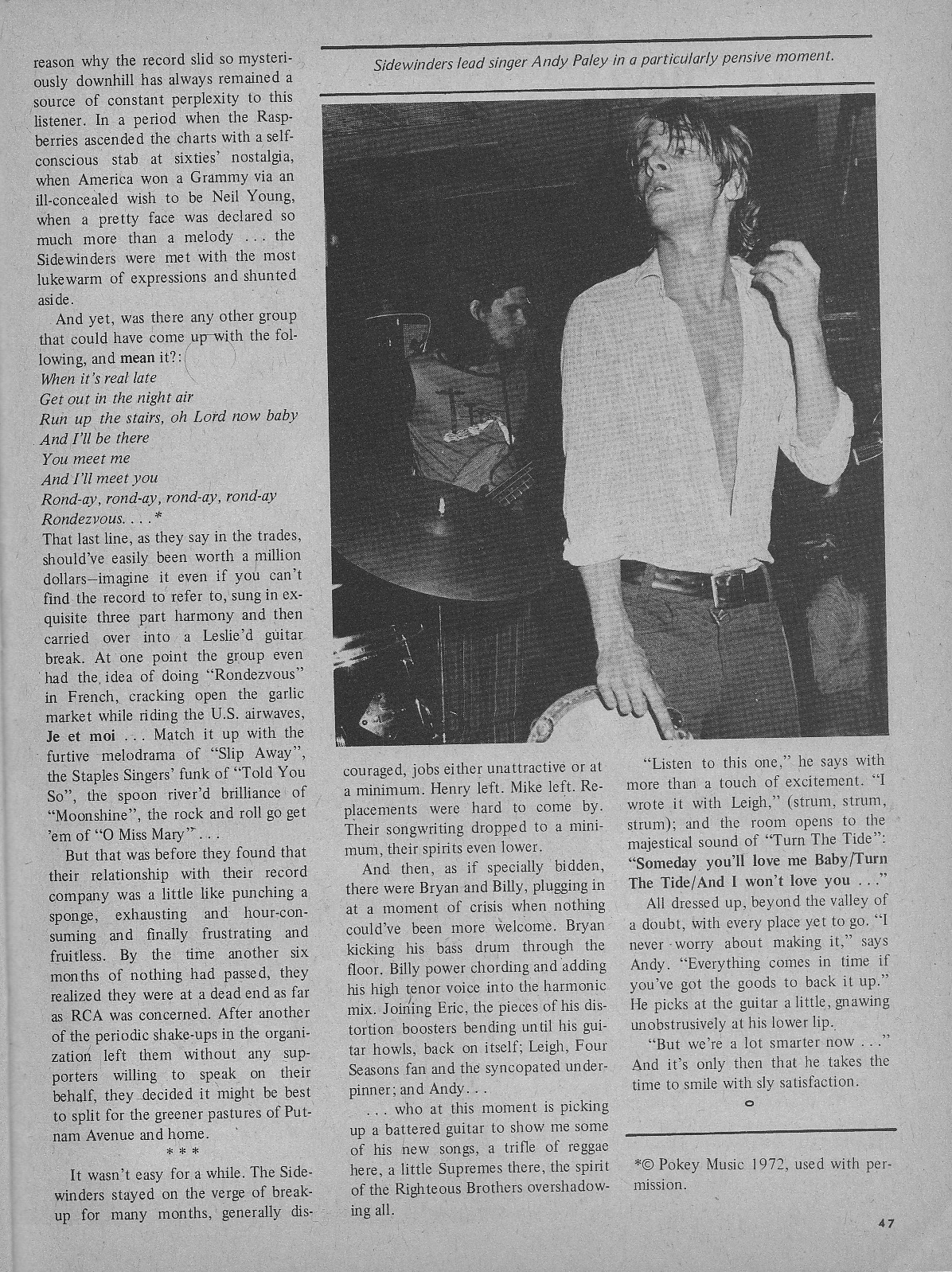