Although it may only start with John Holt's "Ali Baba," and you may take a turn to Dr. Alimantado's "I Killed the Barber," then on to the good doctor and Jah Stitch on motorbikes on "The Barber Feel It" and then Stitch's "Bury the Barber" you will return to whence it came. Dizzyingly you end up full circle back at the Paragons. Yes, back on a Saturday morning over coffee and "The Tide is High." Who knew it would end up like that. It is amazing how many times Blondie played in LA in the early years of 1976-1979. Given their time in LA it was no surprise that they had such a rabid fan base, including Jeffrey Lee Pierce and Pleasant. They were also one of the early phone guests on Rodney on the Roq on KROQ and where I first them before they became part of the regular rotation on the station. I just missed Blondie here and wished I had gone . . . Let's see the dates laid out: 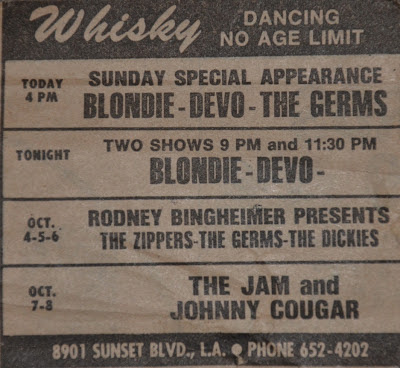