We have previously posted Roxy Music's 1975 Cleveland airport arrival here. Not sure why New Zealand didn't field a bigger fan arrival at Auckland International. Maybe "Love You" was not that big a chart hit here? Photo by Murray Cammick who founded "Rip It Up" in 1977 and still writes and shoots though is mostly concerned with soul reissues. 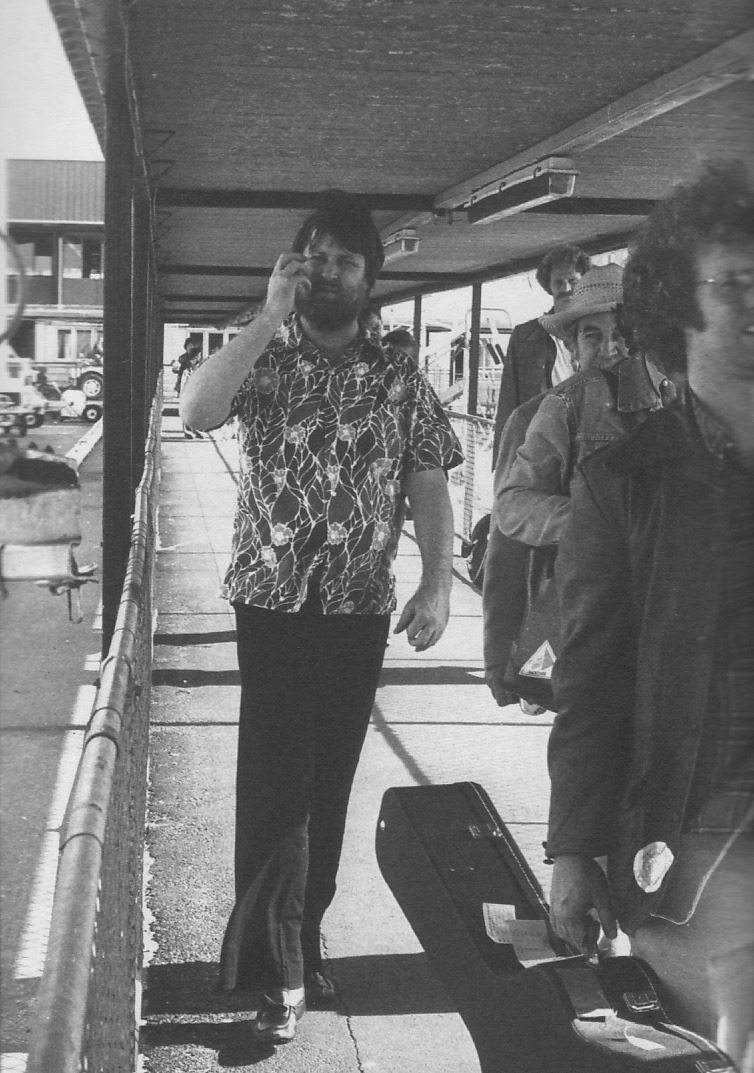 Gotta love Chris Knox's favourite lps circa 1979: "Help," "Strictly Personal," "Wee Tam," "Plastic Ono Band" and "I'm Stranded." He adds in the single of "Heroes and Villains" and the b-side of Napoleon XIV "They're Coming to Take Me Away." Chris has been pretty consistent since day one. Alec names John Cale's "Paris 1919," the Beatles and Bowie. Both Chris and Alec are on the same artistic level as their influences no doubt about it. Toy Love was great and the Tall Dwarfs even better, and they were together even longer than the Beatles! Recently was listening to both of the Chris Knox and the Nothing cds and watched "Let it Be" on dvd and was wondering how Chris was doing. Clippings from the barn archive for the most part - most are not on the Toy Love webpage. The Toy Love clip was from Aussie show Countdown during the Sydney sojourn as seen on the "Sydney postcard." Other Toy Love clips are out there but that may have been the oddest given the lip synch. Incredible String Band for its influence. 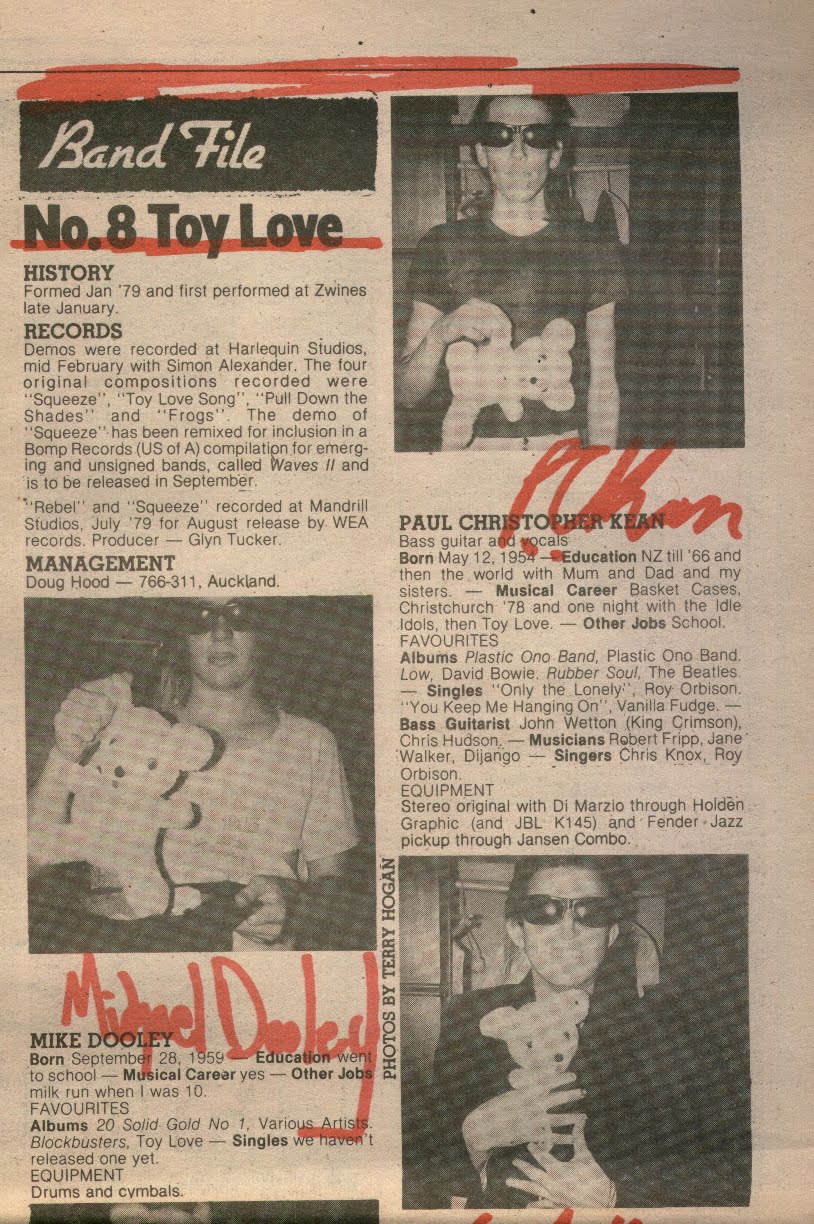 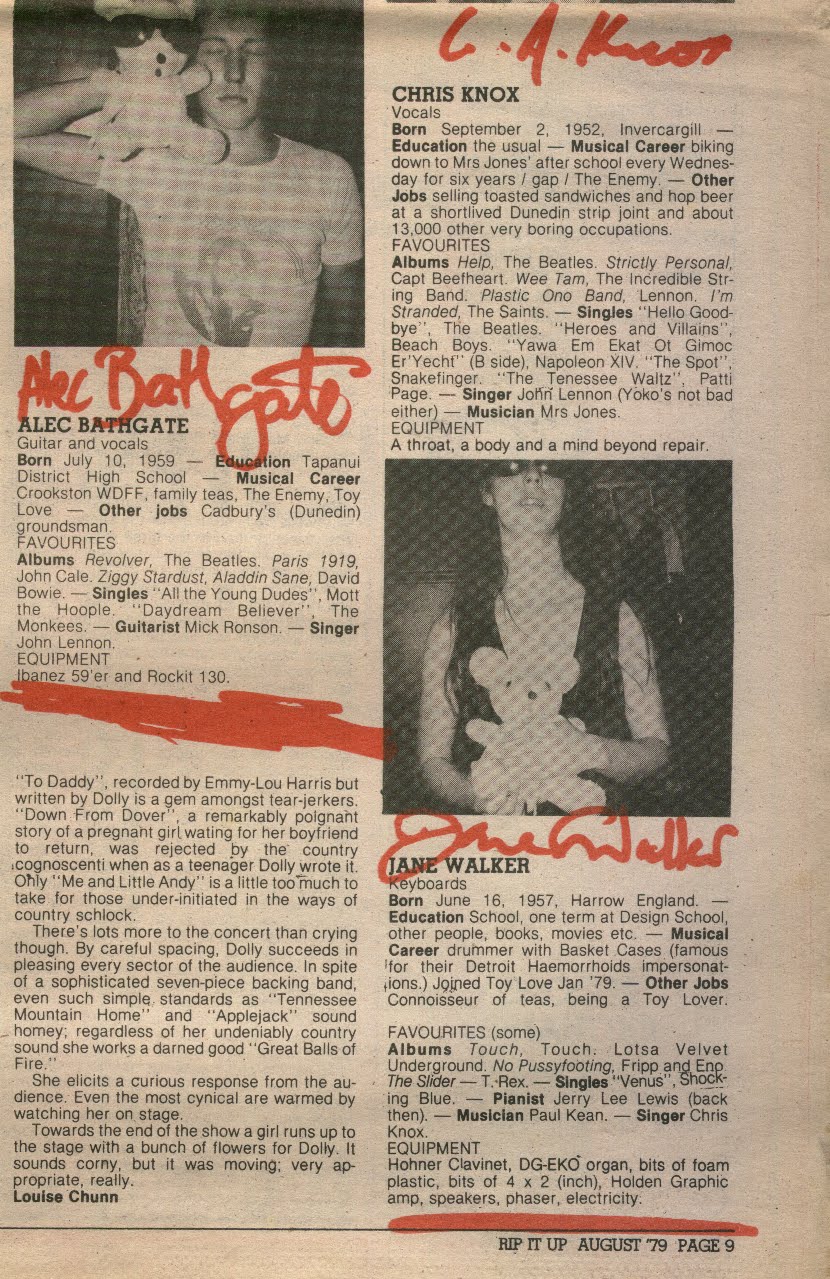 These outfits are outstanding and they are the only guys to get away with it: 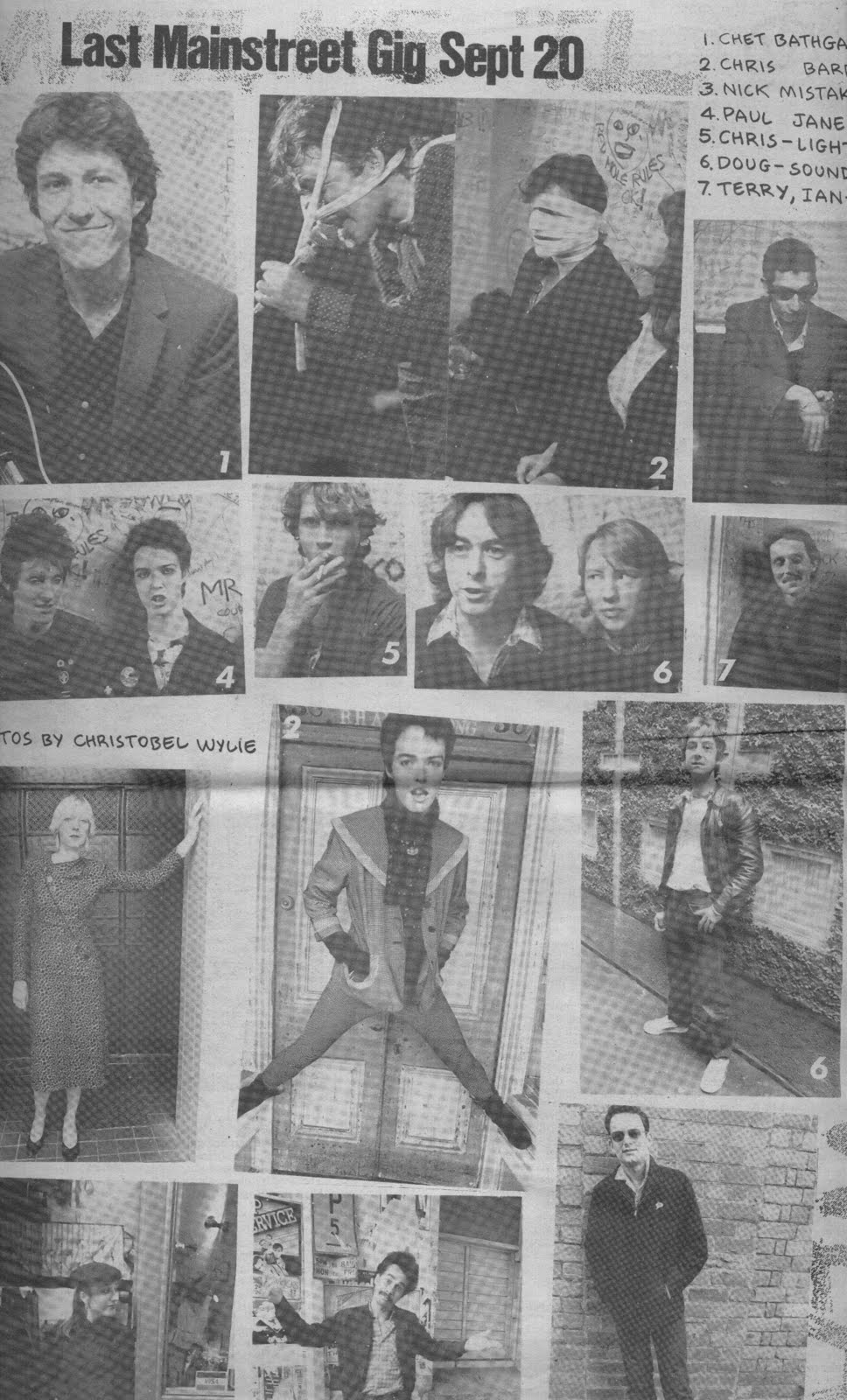 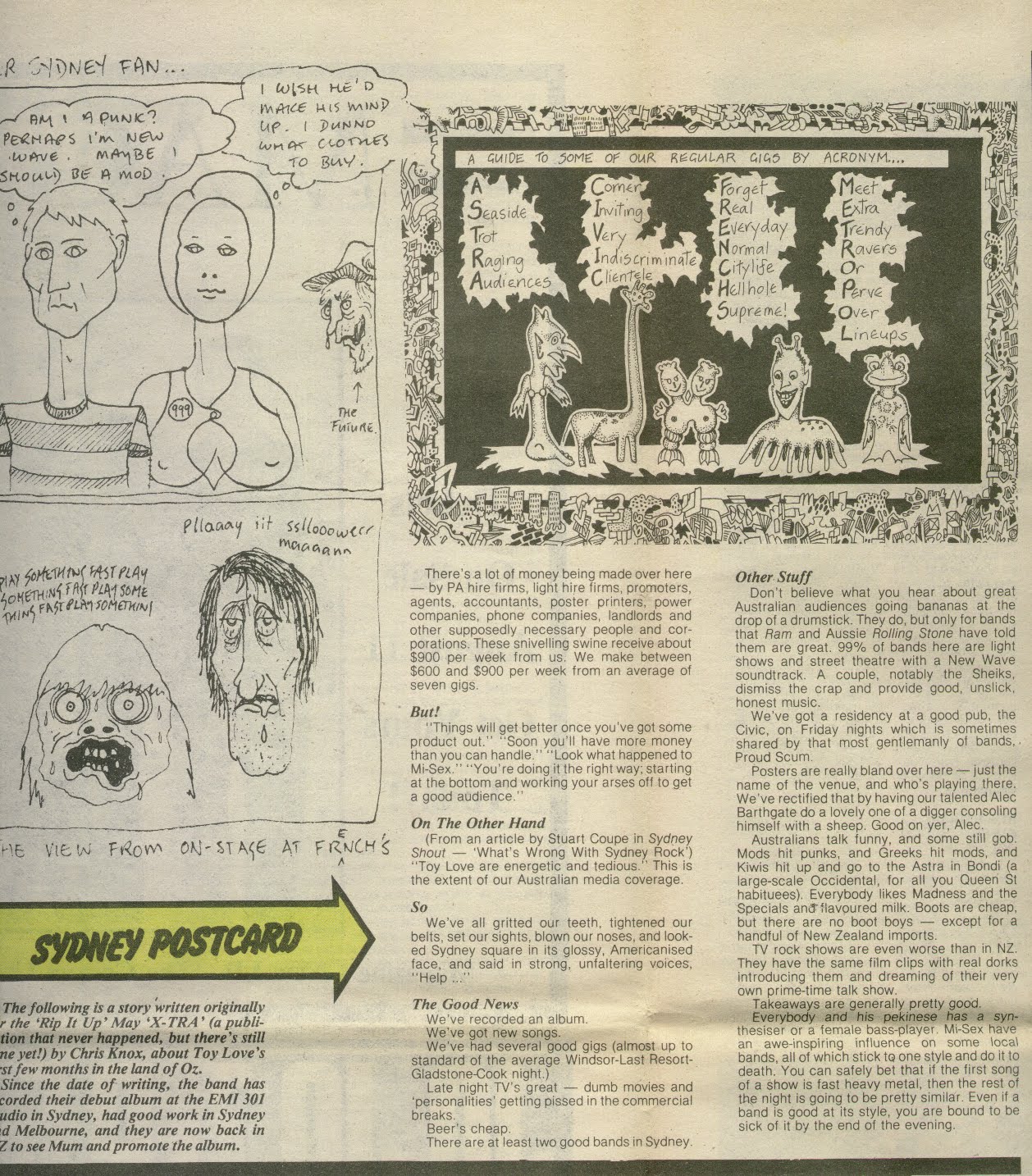 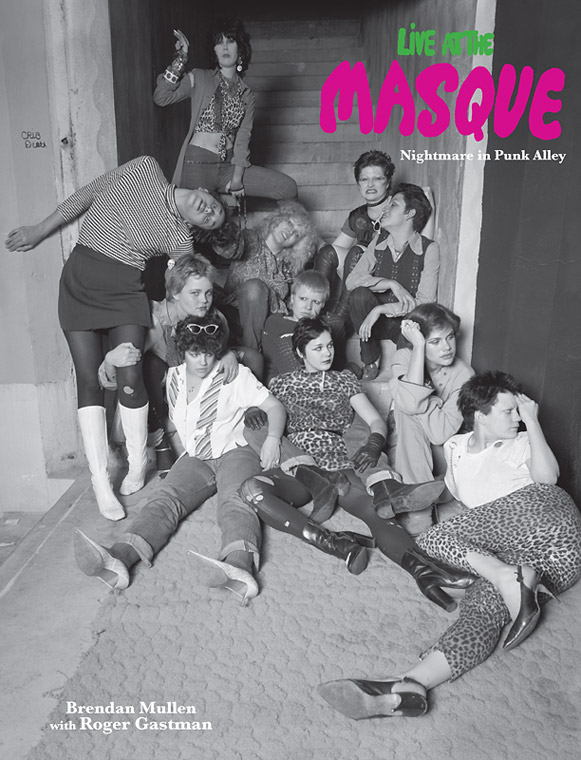 For some reason I have always drawn dividing lines between the early Los Angeles/Hollywood punk scene at the Masque and the SST revolution that followed. History is more fluid than that and in fact, the brain trust that changed my musical landscape and that of scores of others in the 1980’s was there as well. I know from my own many, many viewings of the Decline, which has its own fair share of lane changing what with the arrival of the hardcore and all, that you can blink and miss for example Watt and Baiza enjoying the show in Hollywood just post Masque. Then of course there is Kira. Kira was totally there, and her brother Paul played in one of the greatest bands that Seattle, Oklahoma and LA has produced since the 1960’s, otherwise known to you and me as the Screamers. Kira was one of the first 100 punks right? Or is it 200? They had Masque reunions, alternate Masque’s etc, almost as soon as the original location was shut. I remember a Masque reunion in the early 80’s based on the photographic evidence in Flipside at the time. I got to go to another Masque reunion in the 1990’s for an eastside political fundraiser where I was lucky enough to actually see a Screamers reunion performance (though minus Tommy). Truly outstanding live.
All of this is an elaborate lead in to the SST/Masque connection. There was another Masque reunion back in 2008 at the Echo (there have been these reunions in each decade over the past 30 years). While I sadly missed the show itself due to a personal meltdown, what heralded the 2008 reunion was the publication of a book that I could only have fantasized about when trying to track down all the Dangerhouse 45s but which is now validated as a real-deal, historical moment. It has only taken me the space of a few years to unpack my copy here in the bush but man was it worth the wait. The late Brendan Mullen with Roger Gastman’s “Live at The Masque: Nightmare in Punk Alley” (Ginko Press and R 77, 2007) is a jaw-dropping coffee table photo book (with essays, ephemera, lists ) that is just such a visual treat if you have any interest in that particular era of Los Angeles underground culture. Beautifully done, with great photos of nearly every act of the era you can think of as well as candid scene shots taken by just about every rock chronicler of the day. Cue music: the Go-Go's "Living at the Canterbury." If you haven’t tracked down the book by this point in time, put it down on your holiday list and start saving. I haven’t had such eye popping visual enjoyment since, I dunno, the Satchmo art scrapbook that came out a couple years ago, where they captured all of his folk art and collages. Let’s just say that Kira, Keith, Greg, Chuck and Raymond are all accounted for.

Is Chuck not wearing one of the best t-shirts of the late 1970's here? Photographer unknown. Can we read into Chuck's hierarchy of the billing for his own rating of his contemporaries' worth vis a via the Flag? No Wurm? Where is that shirt today as I need to copy it. Though I have to say that many SST acts presumably in 2011 may have actually enjoyed the Nuge and Aerosmith Cal Jam II sets if given the time machine. I know I would have. 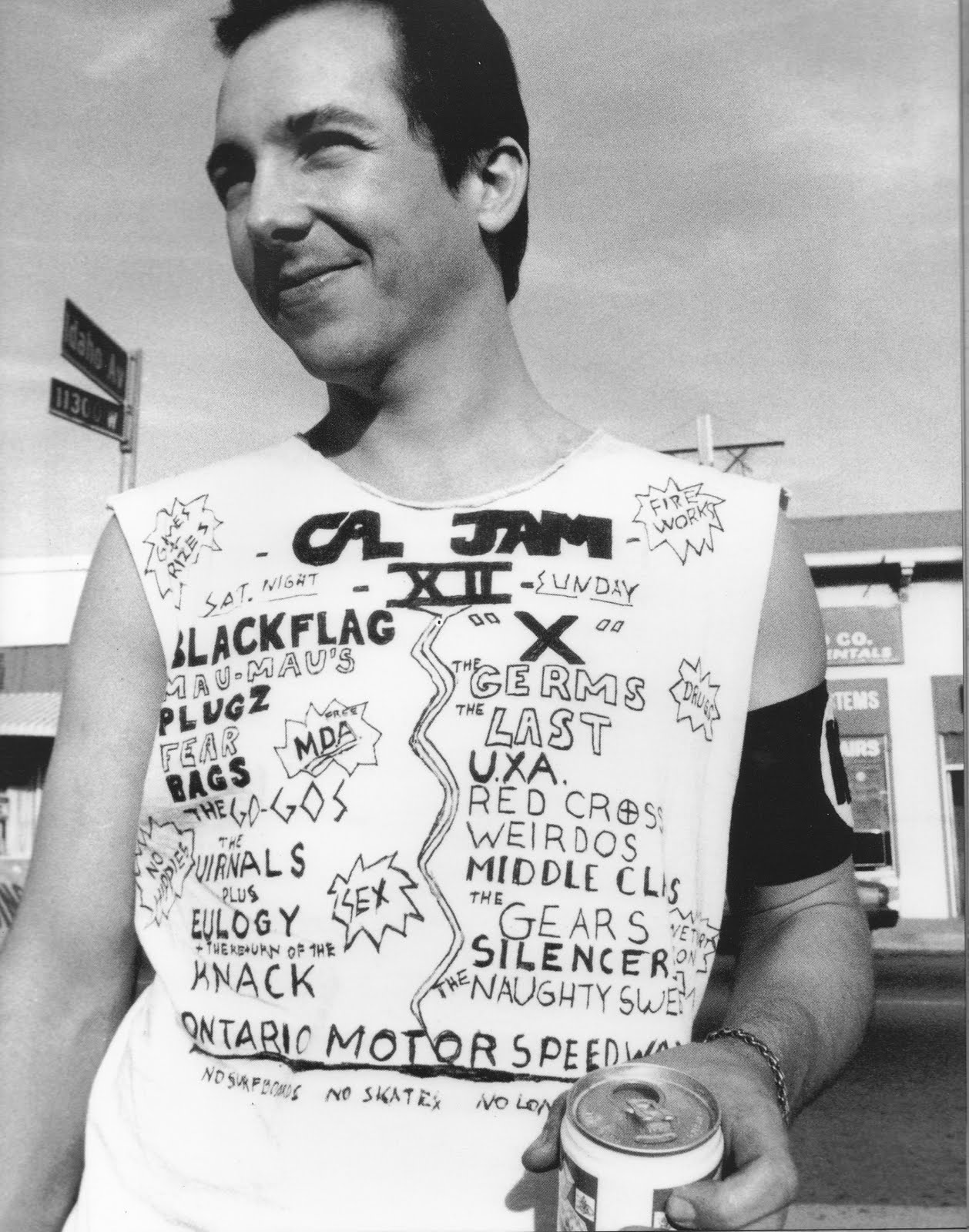 The crowd shots are among my favorite images in the book. The authors have identified Greg Ginn and Joe Nolte of the great Last checking out unidentified action either at the Masque or the Masque benefit. At first I thought it was Greg in full-on Ramones regalia with a "Sally Can't Dance" t-shirt. Fuck yes! But no. After some sober reflection, it must be Greg that is next to Joe on the right and not the guy back in the leather jacket. Readers thoughts? The other part of the same crowd spread has Rock Bottom from Rock Bottom and the Spies, Karla Maddog and Al Flipside at the lip of the stage. Checking out the Weirdos is my guess. Photo by Gabi Berlin. There is another reet photo in the book by Gabi from the same night of Al Flipside, Nickey Beat and Rock Bottom all together. This book is too great and this is only the scraps. 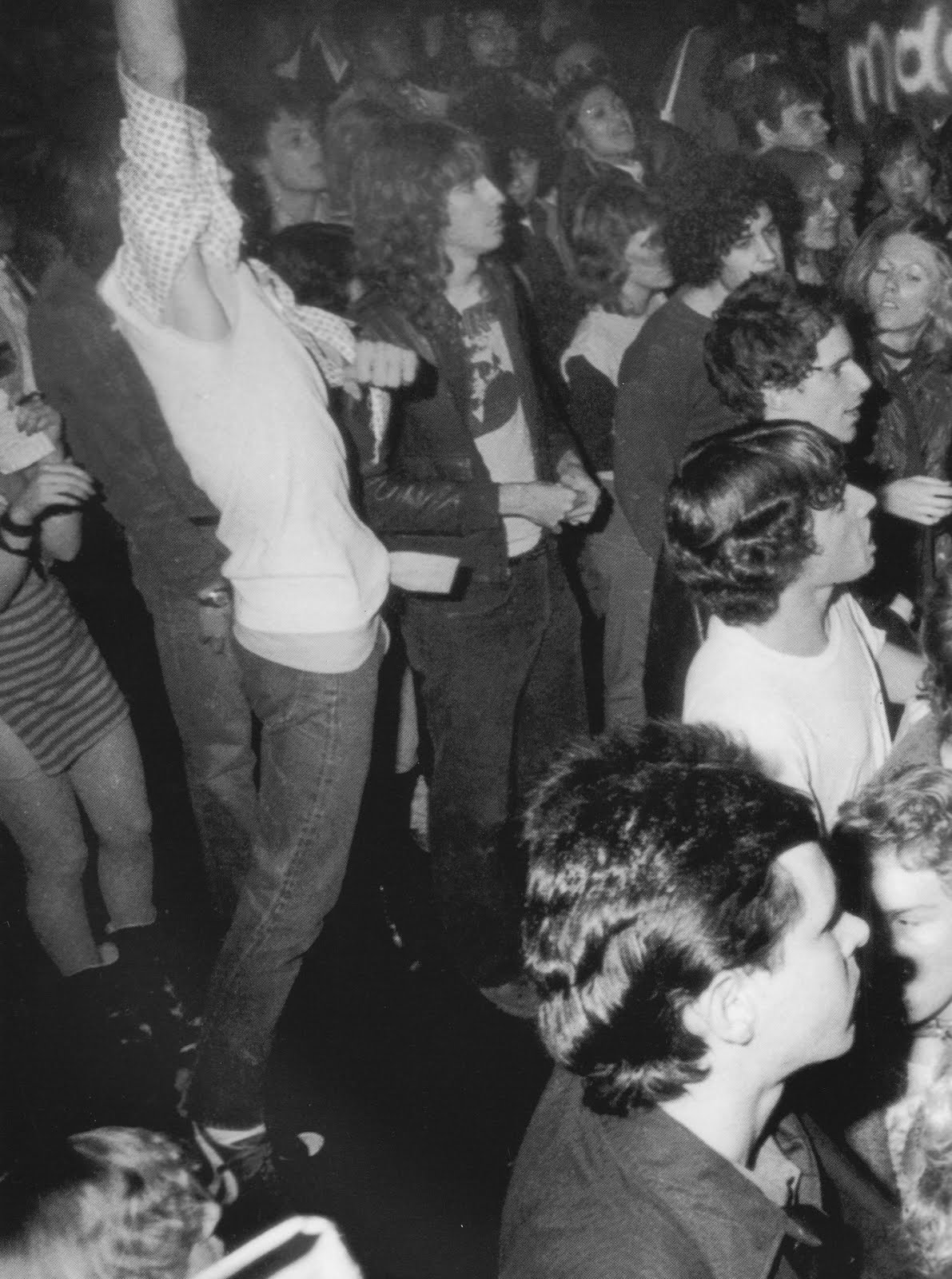 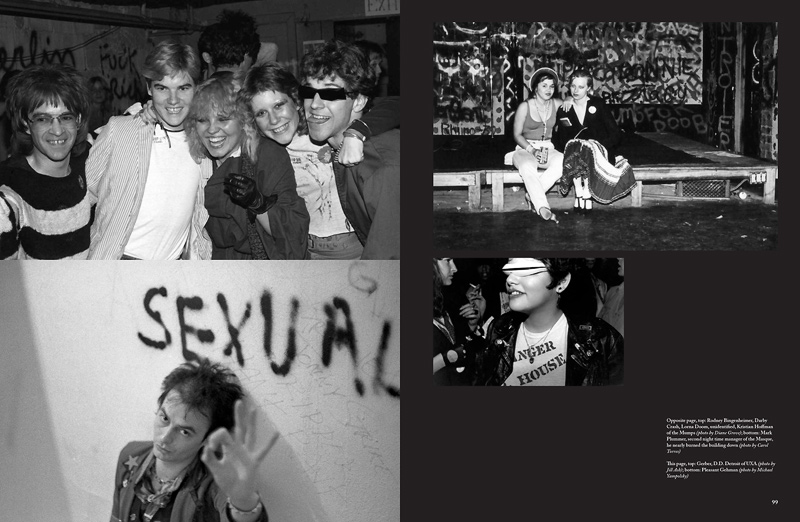 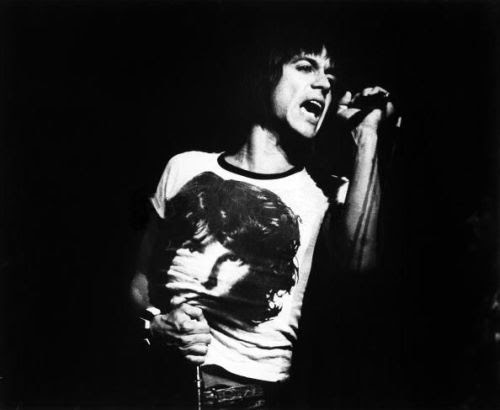 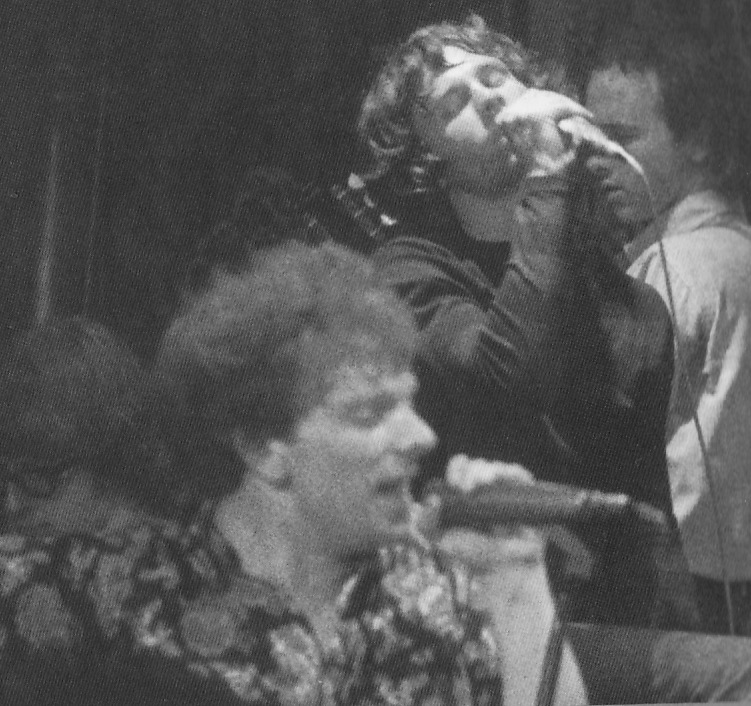 Done with comparative law study for the moment and back to more important things. In 2011, are there still any rockist types who dislike the Doors? Are the Doors (and the Velvets) not the wellspring for most of all that is good in music since their inception, i.e., erase the Doors and we have no Stooges. Plaintiff rests its case and asks for a directed verdict NOW! I still meet people who are taken aback by my avowed fandom. Do you not like the band because you think Jim was pretentious as a poet, or is it because your girlfriend thought he was a (dead) stone fox? You probably also don't like poets Dylan, Hell, Kristofferson, Buckley, Smith, Cohen, Desjardins ad infinitum. Is it an LA thing, where you are bred in your DNA to listen to the Doors loudly when you drive around? No, maybe that is just my own boorish, bogan behaviour. It can't be an LA thing anyway. The Australians are a people who deeply understood the Doors and the Stooges down to their bones - witness their torchbearing in the dark ages of rock music churning out band after band inspired by the Doors and Detroit madness when the world turned to pretty boy synths. Do yourself a favour, and track down one of my favorite rock reads of the 1980's, Danny Sugerman's "Wonderland Avenue: Tales of Glamour and Excess." Not only do you get a great LA tale but to me one of thee Bildungsroman tales of the late 60's and 1970's coupled with true tales of the Doors, Iggy and the Stooges, Rodney's English Disco and a cameo by Brian Wilson. I told Sugarman that myself in the pre-Fawn Hall era at a book signing. This is really something which is great that you need to check out pronto, especially the first two sets in the volume. A true labour of love and any fan that has not heard the 1965 World Pacific demos or 1966 Sunset Sound demos is in for a big treat and to have them rounded up like this is a tremendous public service for researchers. Is "Go Insane" a proto-Stooges track for all of Jim's Iggy/Greg Prevost-styled caterwauling at the end, the child-like piano plonking not unlike something off the first Stooges lp? Or is a sub-Pebbles track that without the pedigree we couldn't care less about? Readers? Hear below and see Sugerman on Jim twice.