I was able to see the Clean last night for the second time this year. Easily one of the best live acts on the planet, with three equally great and compelling frontmen/singers. Is Hamish not one of the best singing drummers outside of Don Henley, Rubin Fiberglass, Dennis Wilson and Ringo when he takes his turn? Which had me thinking about other great Thanksgiving shows. Thanksgiving of 1974 should probably remind you of the second to last live appearance of John Lennon. Madison Square Garden on November 28, 1974 to be exact, joining Elton for an encore after losing a bet that "Whatever Gets You Through the Night" which Elton played on would hit number one. Also the night that Lennon began his reconciliation with Yoko. Heavy night on multiple fronts. See photo below. How do you describe Elton's favourite outfit during this era? Take a boiler suit, cut off the shirt part, add sequins and suspenders and an optional sequined beanie cap without a shirt? 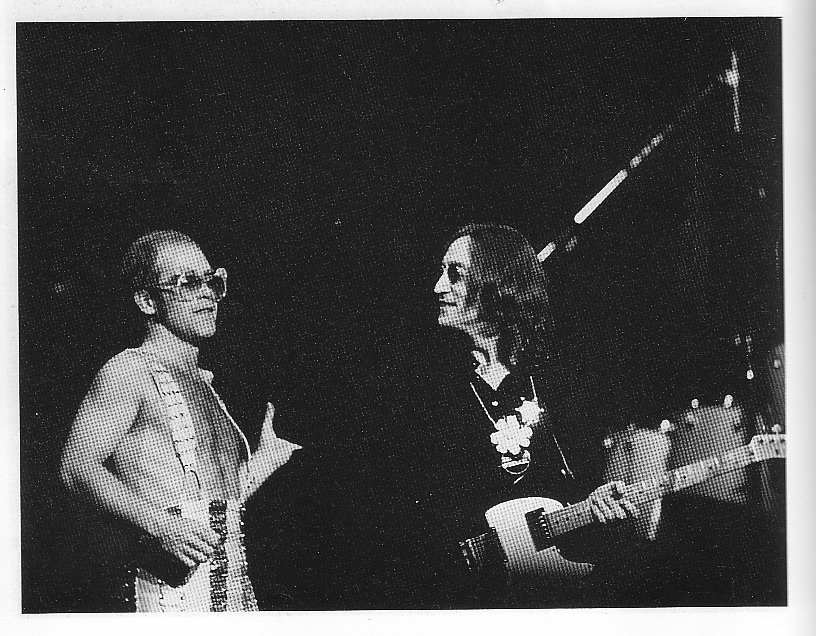 This dude smuggled in the 8mm camera thankfully and you can see it here though he really needs to do a proper sound synch to the bootleg of the show and not the cheap and obvious dub of "Funeral for a Friend." Which had me thinking about the Beatles/Elton connection, which of course leads to Ringo's involvement in Born to Boogie, and then the Elton/Bolan connection. And of course, is there a better Beatles/VU-inspired act that has been together for more than thirty years than the Clean. I need to write up a buyers guide to post-1990 Clean recordings (one on Robert Scott's equally great and monumental Bats is in the works as well as David Kilgour's solo work). The Clean's most recent record, 2009's Mister Pop is a great listen, and features a nice 12-string Harrison/McGuinn homage in "In The Dreamlife You Need A Rubber Soul," which still sounds like nobody other than the Clean. If you have been asleep, Mister Pop, Mashed, Syd's Pink Wiring System and Getaway need to be acquired post haste. At the bottom is a video for "Too Much Violence" from 1994's Modern Rock, another gem in the back catalog you may have passed on to your detriment due to the release date.

At the Born to Boogie premiere December 14, 1972. Some days I am partial to the Mick Rock photo of Lou/Iggy/Bowie and some days to this one. Back Off Boogaloo! 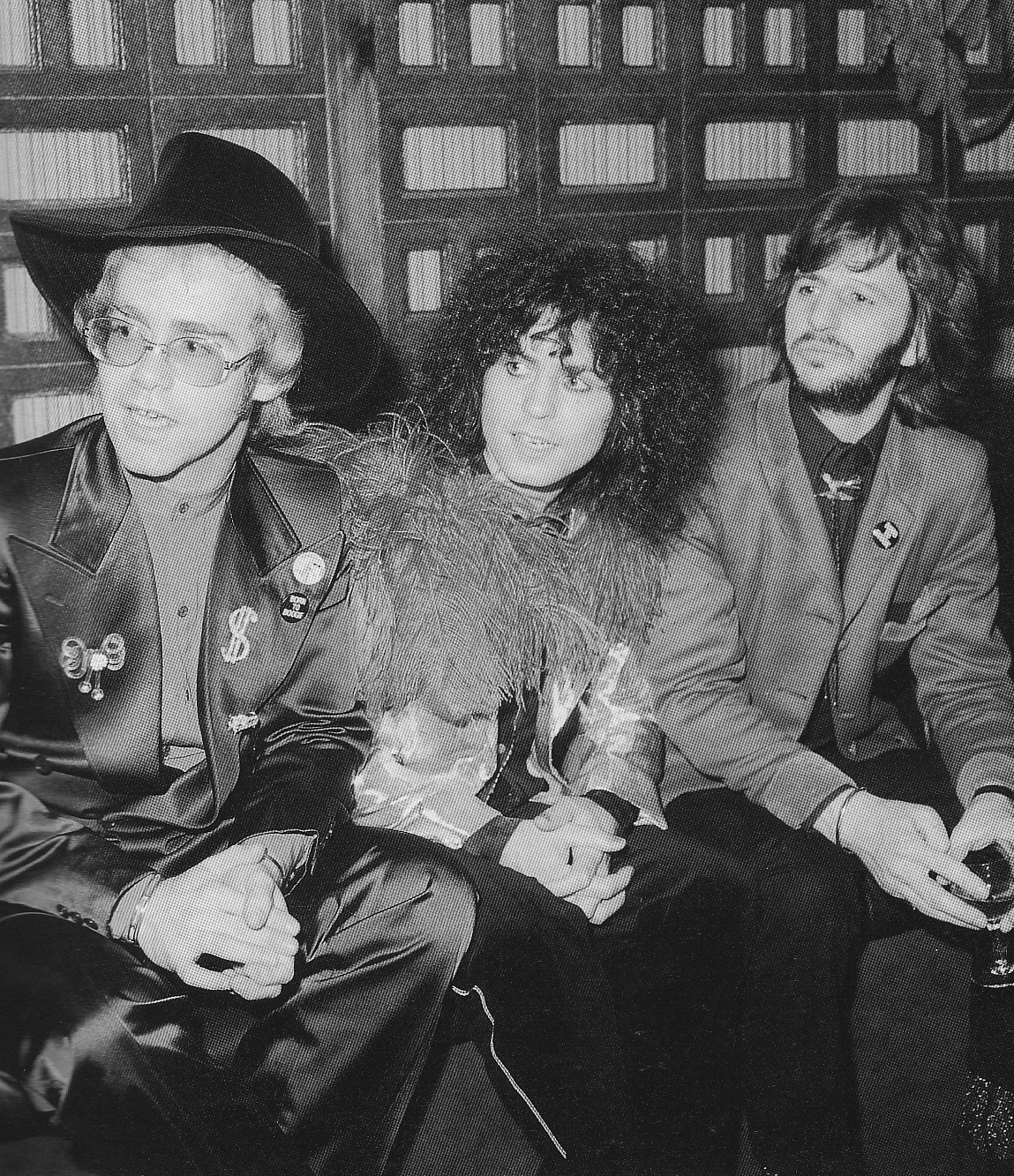 I may be partial to the Mickey Finn version below:

Dig Ringo's "Back to Mono" button as well as his monstrous 'do. 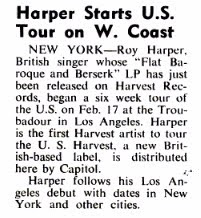 Who knows how the LA singer-songwriter scene would have played out if people paid attention to Roy at the height of his powers instead of sitting back at the bar. Who did he play with in February of 1970? Flat Baroque and Beserk from that year just sounds better and better as the years roll on and is probably the Harper lp I have revisited most often in the past ten years - the underrated Valentine probably comes next. There is a biting edge to Flat Baroque and Beserk which is few and far between other lps from the same year, and it sits nicely on the shelf with yer other faves from '70. So it is a nice surprise when live footage from the era finally turns up after over 40 years:

Harper's Valentine from 1974 features one of the the most rocking, high energy tracks which Jimmy Page performed on in the 1970's, "Male Chauvinist Pig Blues." Not too dissimilar to The Who's appearance without Daltrey on Mike Heron's solo lp Smiling Men With Bad Reputations on the track "Warm Heart Pastry." Just raises the energy level up a notch. Nobody has posted the actual lp version of the track but here is a live version which does not do the studio version justice though has some excellent work from Page and Harper. GREAT cover on the bootleg, no?

Fifteen years goes by quick don't it? Fifteen years between "It's Only Rock n' Roll" and "Steel Wheels." Fifteen years between "Walk to the Fire" and "International Hello." Driving around West Auckland is about as close to an experience of driving around Van Nuys or Reseda as I can get these days. I distinctly remember blaring an early cassette of what became for the most part, "Walk to the Fire" as I drove around the valley on an oven hot day around '95. So when I hear "Someone's Coming" from the International Hello (Holy Mountain) lp blaring on the car deck as I cruise down Railside Avenue on a hot, spring day, it is like having old friends back again - not unlike when you first heard "Mixed Emotions." So, does it surprise me when Monoshock makes the recent Mojo with the George Harrison cover? No, not really - I only wish it was a Macca cover. 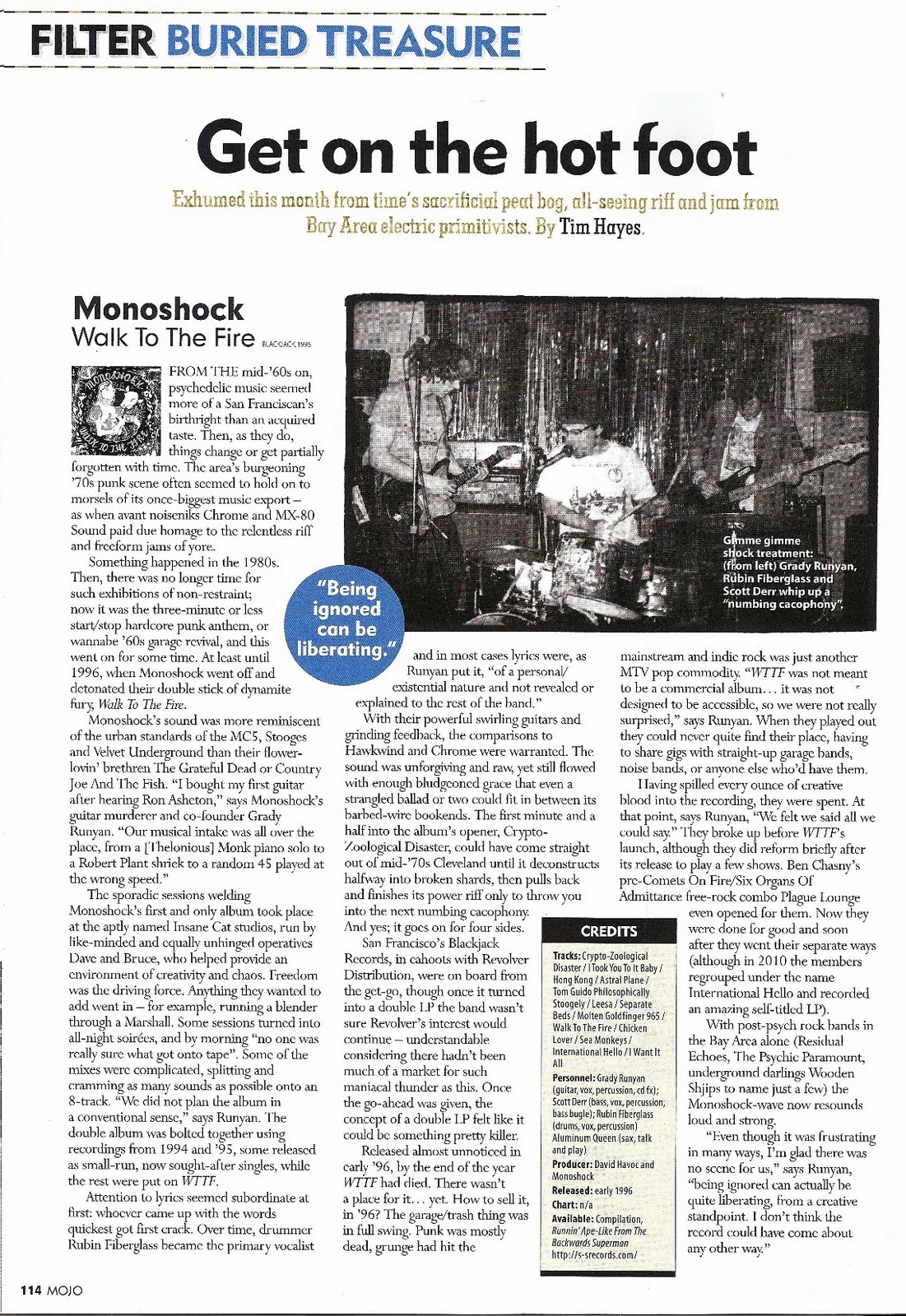 Can we break down this great photo? Entire case of Dewars White Label Scotch, Schlitz can (or possibly glass tumbler) and a pack of hand roll smokos. Early 70's Takoma logo revamp t-shirt which definitely needs a short run re-screen if we have the time. Ricky? Clothesrack and holding what - a drumstick? Nice setting possibly in Santa Monica? Barry Hansen's place in the Valley? Note talks about Reprise but we all know that "Fare Forward Voyagers (Soldier's Choice)" was about to be unleashed.

On another note, late last year I finally got around to reading Rebecca Davis Winters' great bio of Alan Wilson of Canned Heat entitled "Blind Owl Blues." Let's just say that for Faheyologists, it is an essential entry in the canon. The Blind Owl is there in the critical early to mid-60's era with John (Boston, UCLA, etc) and there are heaps of Fahey-related anecdotes. 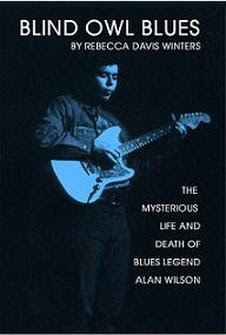 Anyone familiar with Fahey's contribution to "Parthenogenesis" on "Living the Blues" will want to check it out. Winters digs out that Fahey wanted to put out Wilson's solo record on Takoma and recorded a bunch of it in 1966. Harmonica master Wilson had recorded a bunch of ragas on chromatic harmonica. Here is the great photo from "Voice of the Turtle" of from left Fahey, Rev. Rubin Lacey, Wilson and David Evans, Ridgecrest, CA 1966 - more on the background to the photo in the book. 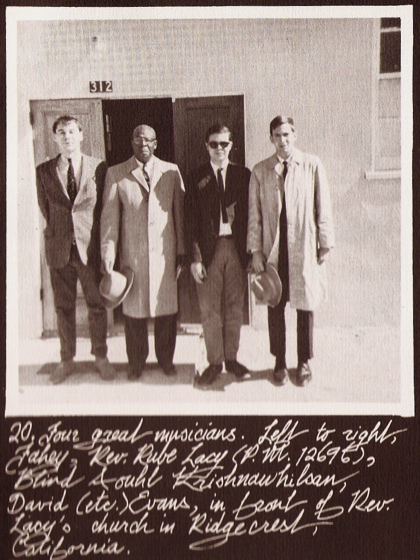 Winters also digs out that on Fahey's "Old Girlfriends and Other Horrible Memories" from 1982, that Wilson's harmonica playing is on there uncredited. Winters fails to note which track so I will do it for ya: "Fear & Loathing at 4th & Butternut." I will post that track when I get some time. Now Glenn Jones was assistant engineer on the lp so maybe he could describe the circumstances of the use (which is truly because Fahey loved the guy). When Winters asked Fahey about the lack of credit, Fahey stated in typical John fashion that "I didn't think Wilson would mind." Here is a choice excerpt from the book:

While they were living together, Fahey felt the need to make Wilson improve his level of cleanliness. 'Wilson refused to take baths very often,' he explained. 'And he usually stunk. When he lived with me, I had to frequently fill the tub with water and soap, and then threaten him, force him to take his clothes off and take a bath. And I'd buy him clothes and underwear and stuff. But he didn't smell too good. Very bad . . .

This is only scratching the surface of what is really a great piece of research for the unacknowledged true masters of the era. Maybe we can kickstart the Fahey bio or Dr. Demento can publish his 50-70's memoirs which would be a goddamn hoot.
Posted by Papa Jon at 1:59 PM 2 comments:

Faster than you can say Dick Clark productions, the clips get taken down from the net. I am not sure how long this one will be back up for:


And all this time I have been waiting for the performance of Sparks on American Bandstand from 1972 to materialize. 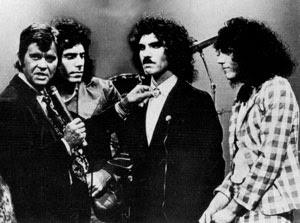