From a barn copy of Terminal Zone #1, 1977 (Chuck Berry cover). Issue has a long piece on The Aesthetics of Rock as well. Terminal Zone was a conscious turn from pure fanzine writing to something I dunno, more scholarly in an American cultural studies sort of way. Footnotes and whatnot (not that I have anything against them ).  Something that would get the stamp of approval of the Dean if ya know what I mean. This may be the only thing in there which doesn't quite have that stench. Just nice to see the state of the art record disease from 1977, and a nice LA record store tour as well 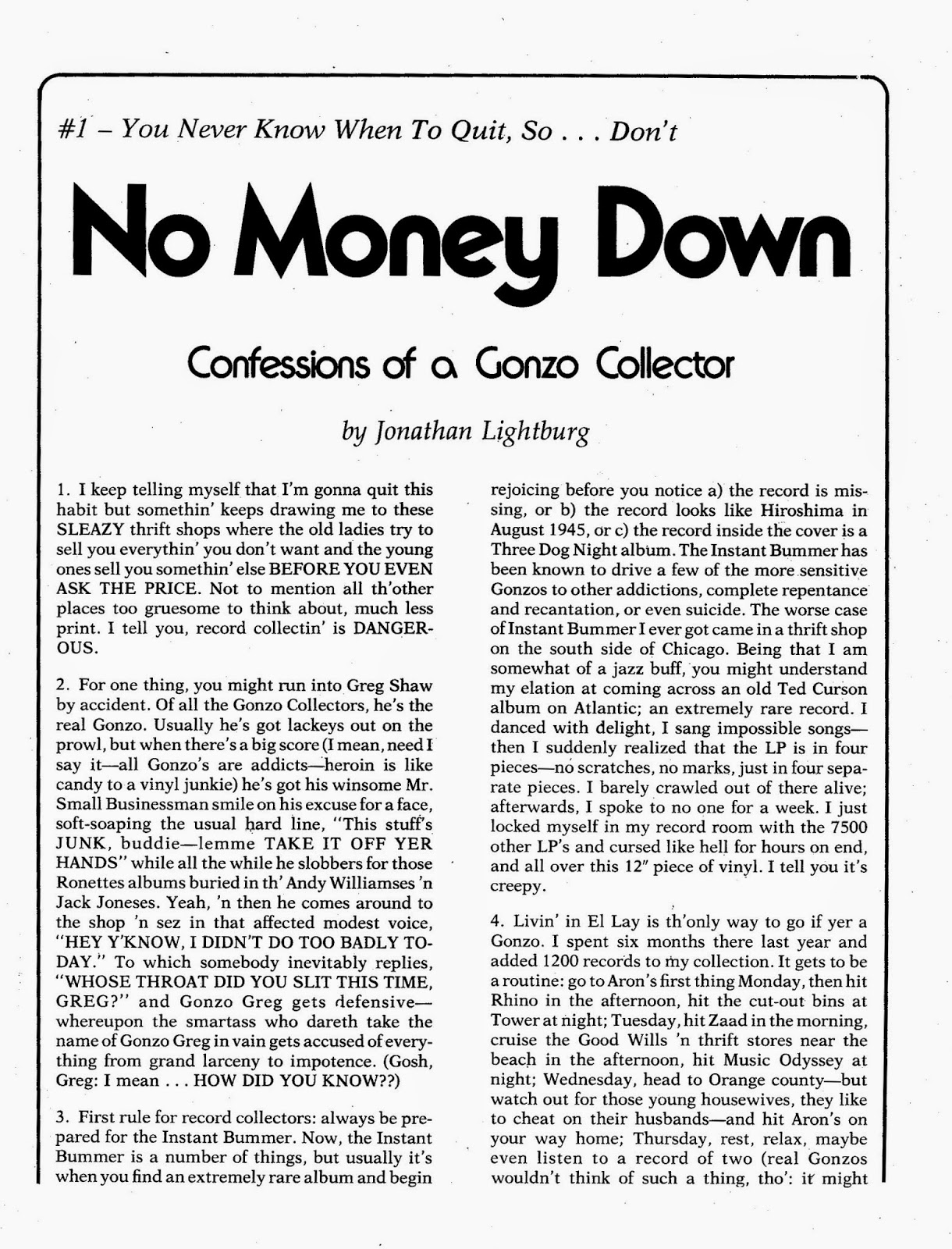 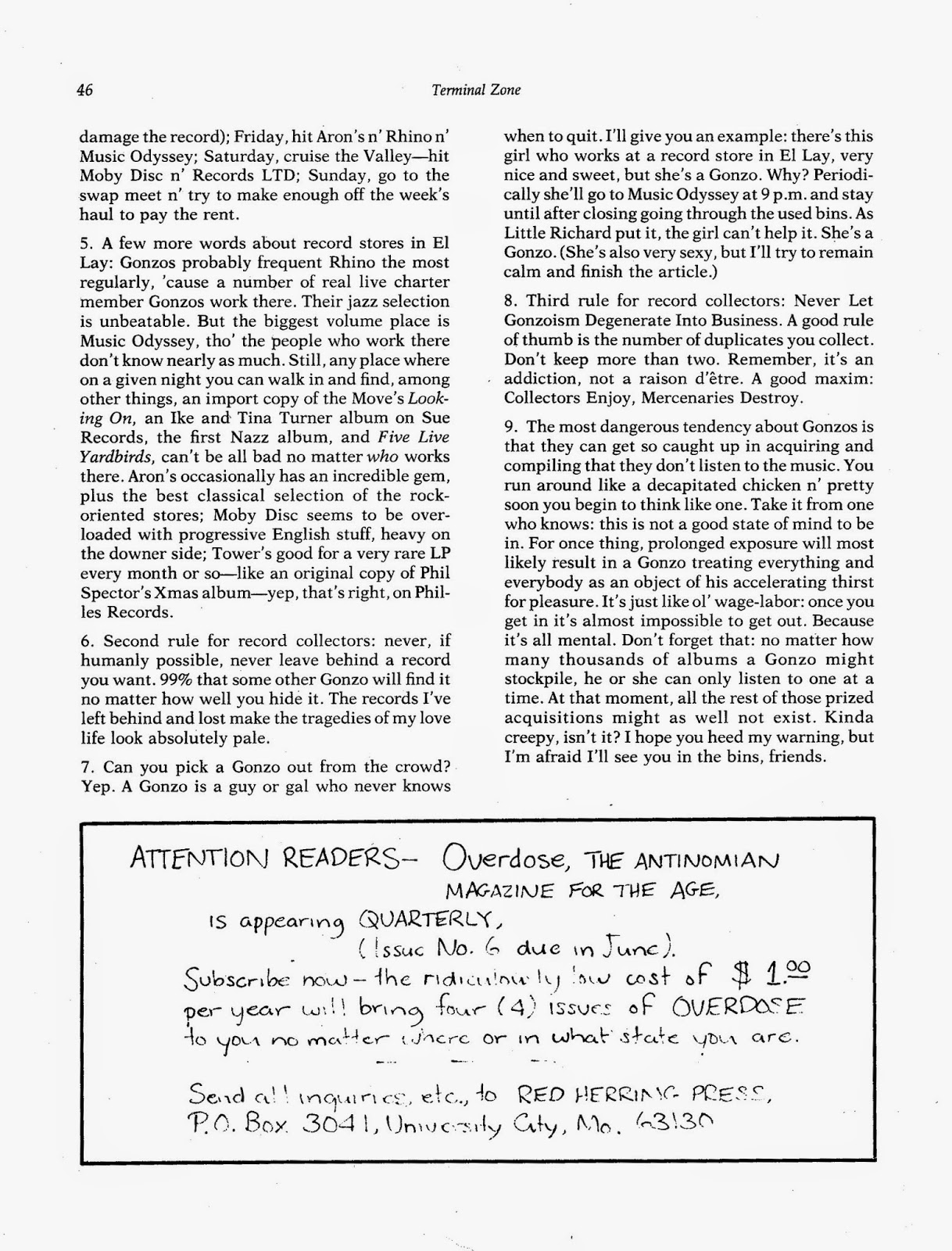 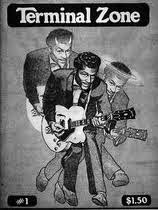 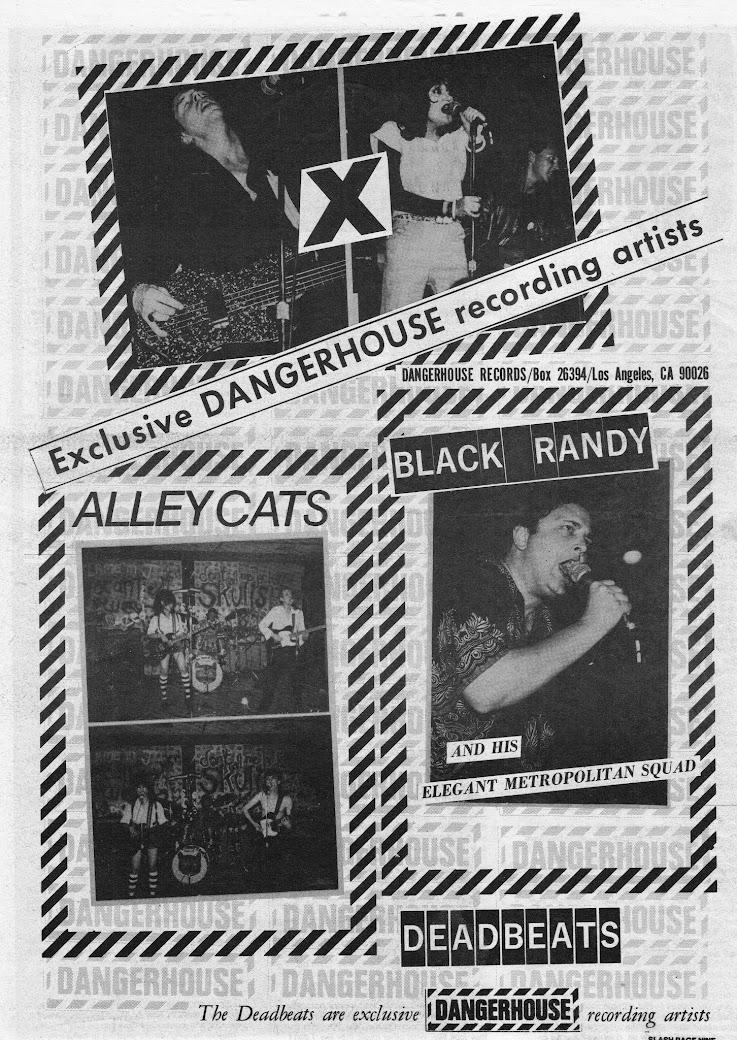 Better than Sparks' appearance in Rollercoaster but perhaps not as great as the Pack in a 1977 Amanda Lear exploito film, is Black Randy's appearance in The Fabulous Stains. That Pack lp from 1978 just sounds better and better every year. Who woulda guessed? Also, from the barn a great DANGERHOUSE exclusive ad:
Posted by Papa Jon at 3:06 PM No comments:

Is the Turtles cover of "Lady-O" not one of the best pre-solo Sill covers out there and a great early promo film to boot (what ranch is that?). Flo & Eddie in the early 70's were on such a great roll: Mothers, T.Rex (Slider, Electric Warrior), Alice (Billion Dollar Babies) and their own 1973 lp with a GREAT Small Faces cover ("Afterglow"). I recently came across the Lou Reed connection again which I had forgotten about with the barn archive Bottom Line clipping and the Midnight Special interview (a sceen capture for you as well!). Also digging the Turtles "Outside Chance" with one of the best "Taxman" lifts outside of "Start." 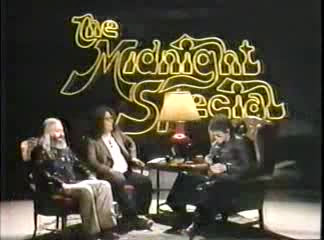 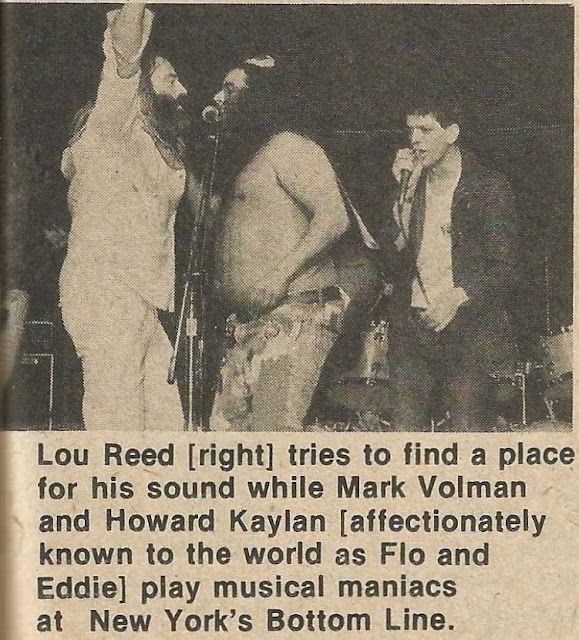 I was recently wondering what Van Nuys, California's Rock Corporation was like: a "valley biker joint with a TV dinner tray for a stage" that's what. Possibly the earliest (non-gossip) coverage of the Go-Go's in Slash, 1978. Unfortunately, I didn't get to see them until the fall of 1981 with the Fleshtones at the Greek Theater (LA). By that time, quite a different proposition. GREAT descriptions of the Middle Class as well. Photos by Steve Samiof and Melanie Nissen. Review by . . . . 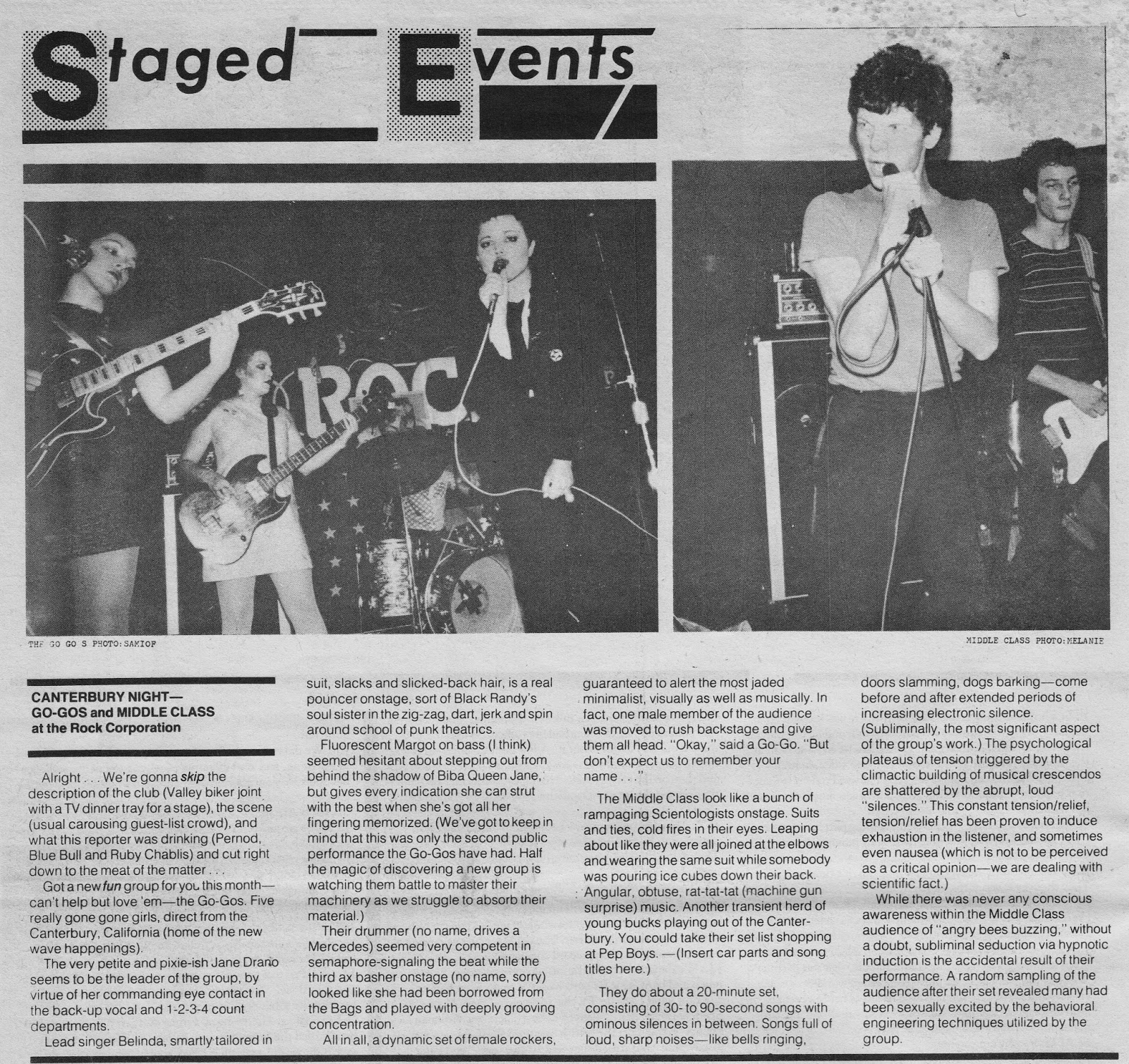 So Kickboy, How Do You Really Feel About VOM/"Some of you are very clever people"/"It was reaching terminal boredom proportions"

Over to Metal Mike in his attack on Mullen and Spitz' We Got the Neutron Bomb : The Untold Story of L.A. Punk:


Not once in this book is there a mention of the March 1978 Dickies/VOM 2-night, 4-sets stand at the Whiskey, which was one of the wildest,craziest, most chaotic spectacles of "punk rock," anyplace, anywhere, anytime. Re: Paul Grant's 2-page article describing the opening night show in national slick-mag NEW WAVE ROCK...I was there (at the Whiskey), it was that hysterical/nutty/wild and then some. Never laughed so hard in my life. Ah, wait, wait, wait, back up the truck-there is no mention of 1977-78 LA punk band VOM (with rock critic and brilliant Blue Oyster Cult lyricist Richard Meltzer) anywhere in this book.Now this is getting interesting.


Uh, "wildest,craziest, most chaotic spectacles of "punk rock," anyplace, anywhere, anytime." Are we talking about the same set of shows here?
Posted by Papa Jon at 5:26 PM No comments:

Let's Head to the Rock Corporation

Can you believe this lineup from 1978 in VAN NUYS! Currently the location of a panel beater/body shop.  Like Van Nuys needed another one!  The Valley and punk. I remember a lot of shows at the Country Club and later at BeBop Records but that was the next era. So were the shows at Devonshire Downs and Godzillas.  Technically, I lived closer to the Rock Corporation (great name that one!) than Fiberglass, but it would have been close as to who could bike there first.  What was so great about first wave LA punk were all the weekend MATINEE shows!  The Whiskey had them as well.  What comes to mind when I think SFV punk hall of fame are the Dickies, Shock, FEAR, Bad Religion, RF7, Killroy, etc. What I don't think of when I think of Van Nuys are following folks heading there (intentionally): the Eyes, F-Word, Simpletones, Controllers, Plugz, X, Middle Class, Bags, Flesh Eaters, etc.  Did the Germs play the Rock Corporation? Claude Bessy in the valley, please. Can any readers share what the venue was actually like. 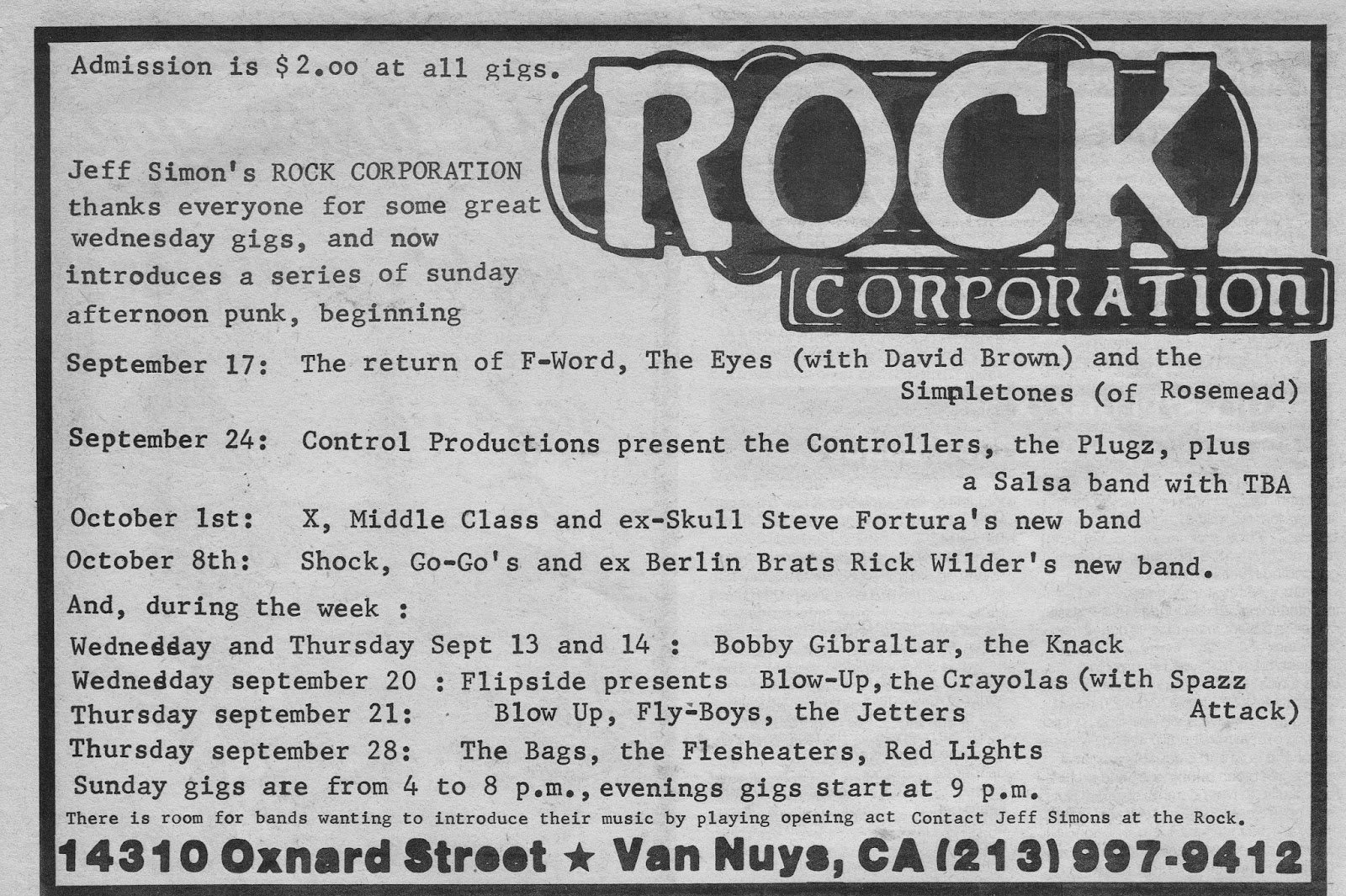 Was 1978 the highwater  mark for punk singles in LA - lps are another story? Let's see - the street date for this EPIC release was September 21 (ad swiped from a barn copy of Slash September 1978 - Peter Tosh cover).  The following month, October 1978, Black Flag's "Nervous Breakdown" e.p. is released though recorded well before that.  What else came out in '78: the Weirdos double A side "We Got the Neutron Bomb"/"Solitary Confinement," the Bags "Survive," the Germs "Lexicon Devil," X "Adult Books"/ "We're Desperate," the Middle Class "Out of Vogue" and on and on . . . 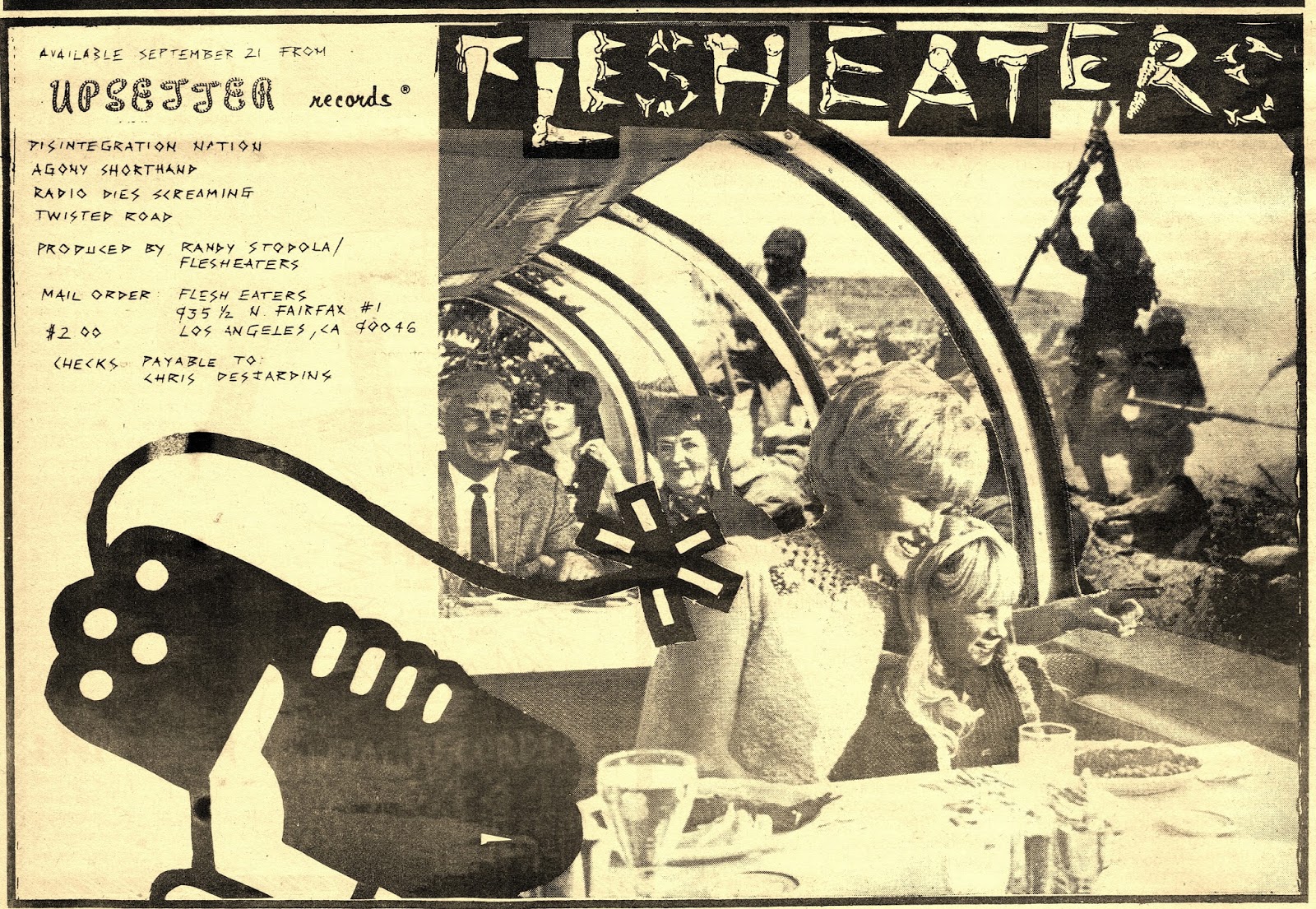