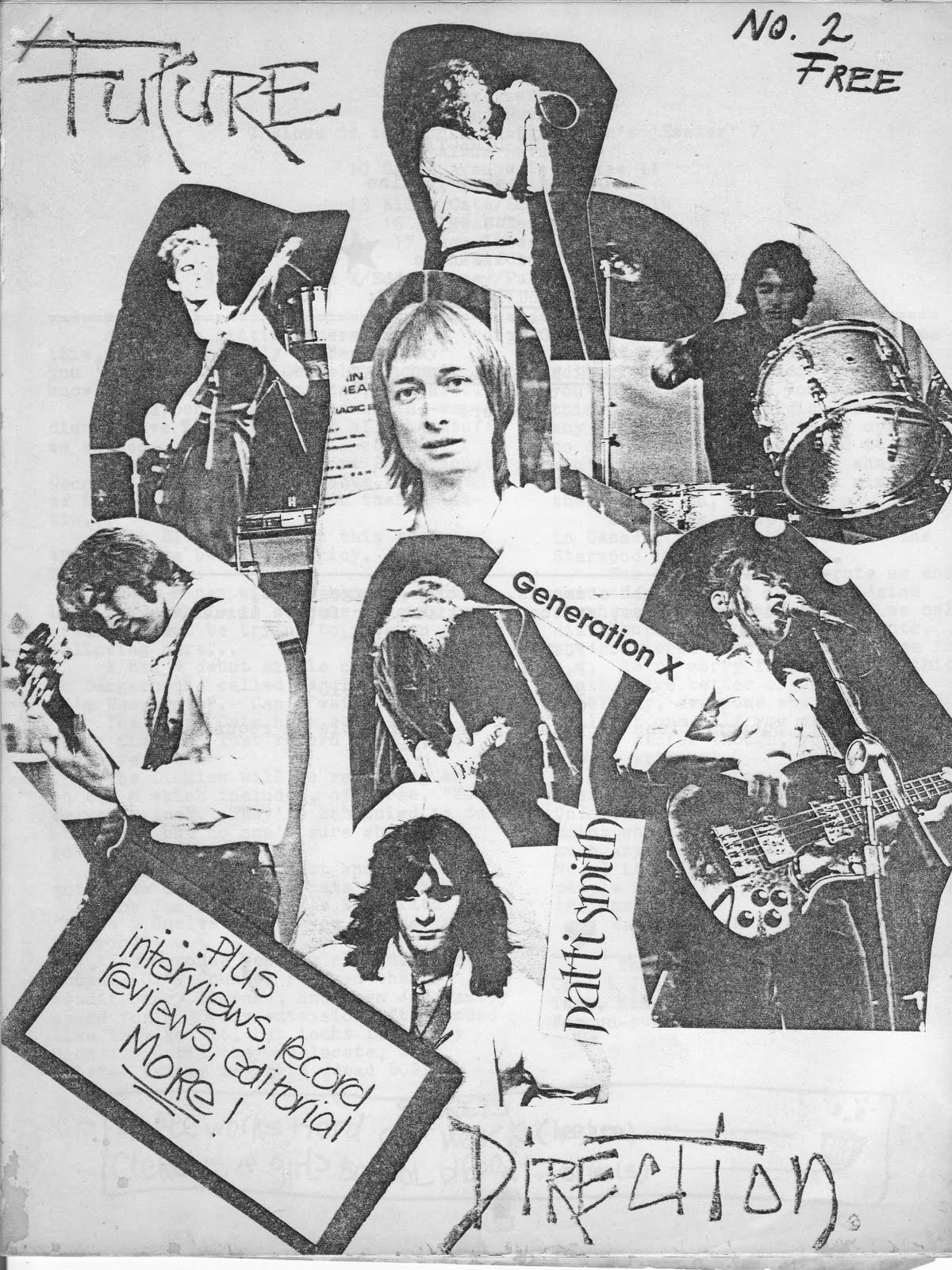 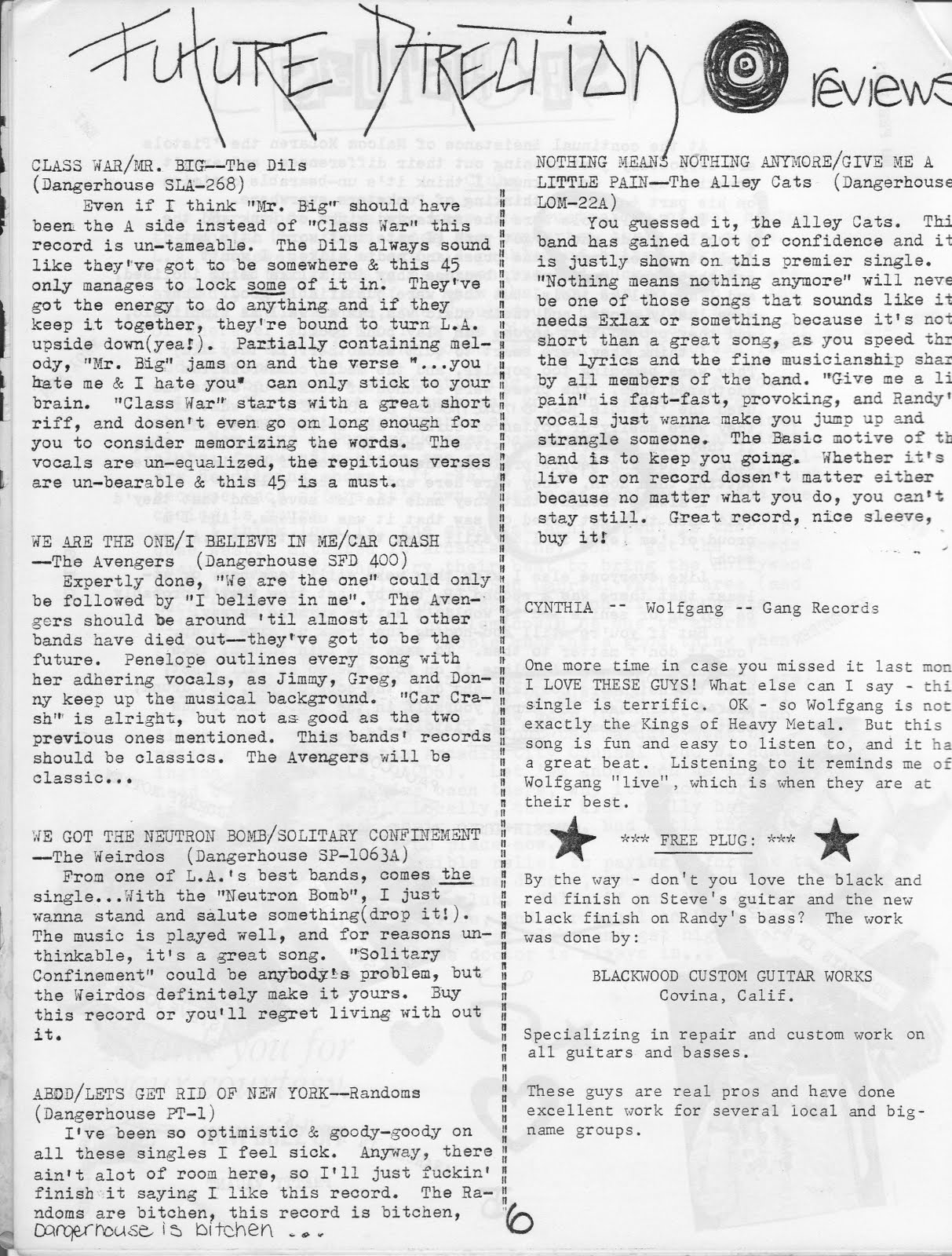 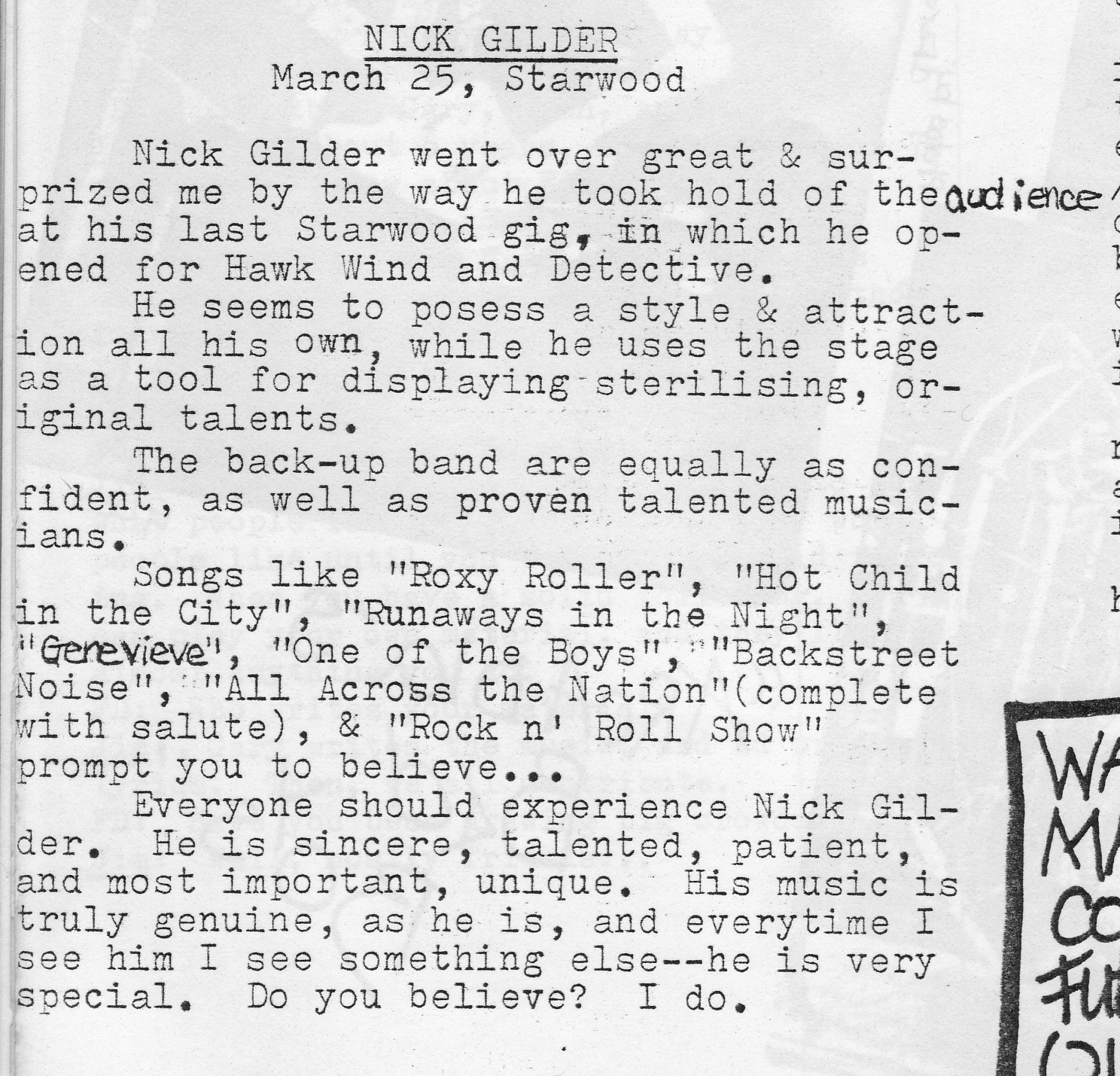 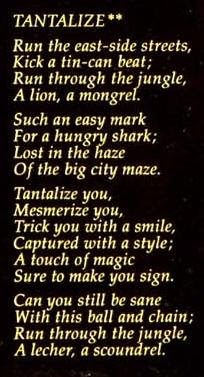 We can only speculate who came up with the great column idea in Rock Scene of "Know Your Rock Writer." My guess is that it originated with Lenny Kaye aka Doc Rock but even money says Richard Robinson or Lisa Robinson. Does it really make any difference? They only featured the best writers in the column and this prime example from January 1976 just makes it seem sadder that the much missed Alan Betrock is not around to introduce us to greatness that was right there under our noses. We know him from Jamz, Rock Marketplace, New York Rocker and Shake Records. As per usual, you have to click on the image to actually see the whole thing. Gotta love the PSG/Television flyer there on the back wall. And the beefcake pose? Brilliant move. Try that one Mr. Record Nerd. Personally, Betrock is responsible for my introduction to the Neon Boys and possibly to D.Boon and Watt's first listen to the Hell classic "Time." Not many of the great rock journalists and fanzine writers of the 1970’s ever published books worthy of their hard earned reputations - reputations based upon yards of written periodical space and all night sessions editing, writing and typesetting. Alan Betrock was one who did, writing what may be considered the definitive book on girl groups. Let's just say that there were a lot of music books published by hacks who did not have anything near the taste that Alan had and who now get read in college sociology classes as decoding punk's early 20th Century roots in various European movements. Uh, I think I will take a pass and just hand me my copies of Jamz and Bomp thank you very much. 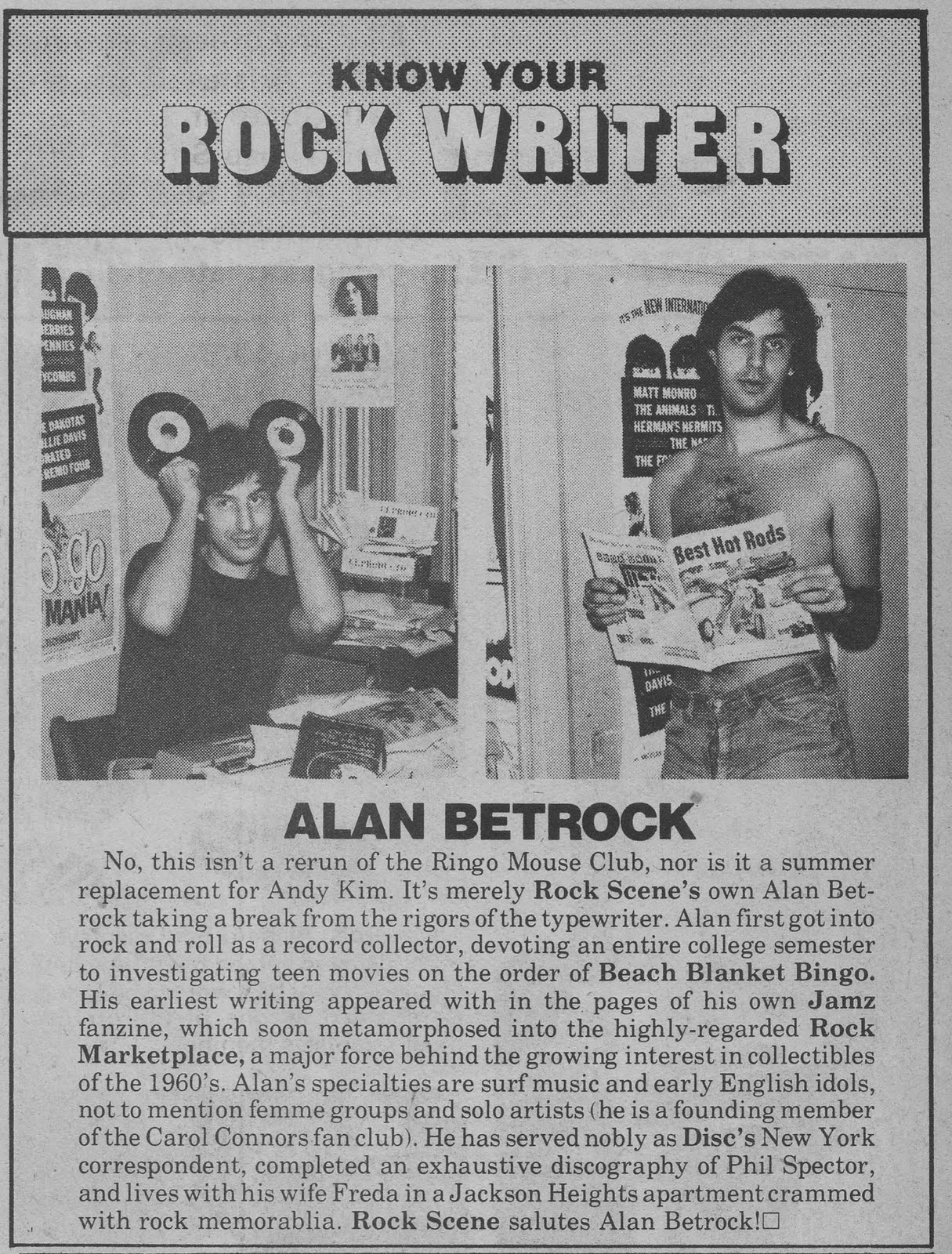 From the Lou Reed in a Nudie suit issue of Fusion, comes this great letter from Alan setting the record straight. Other than Who Put the Bomp, Jamz was the ultimate record nerd guide. Enjoy Alan's good hearted take down of Jon "Prix" Tiven and David Newberger and their lack of erudite knowledge on Van the Man's back catalogue. Mere mortal, do you really think you can outsmart me. Apparently New Haven Rock Press was a good fish wrap if you wanted actual recording data and details. Makes me wonder what Alan's take on the great 1974 lp "Veedon Fleece" was? First is the great Lou cover then Alan's "take that" letter. If anyone would like it, I can post the Lou article. 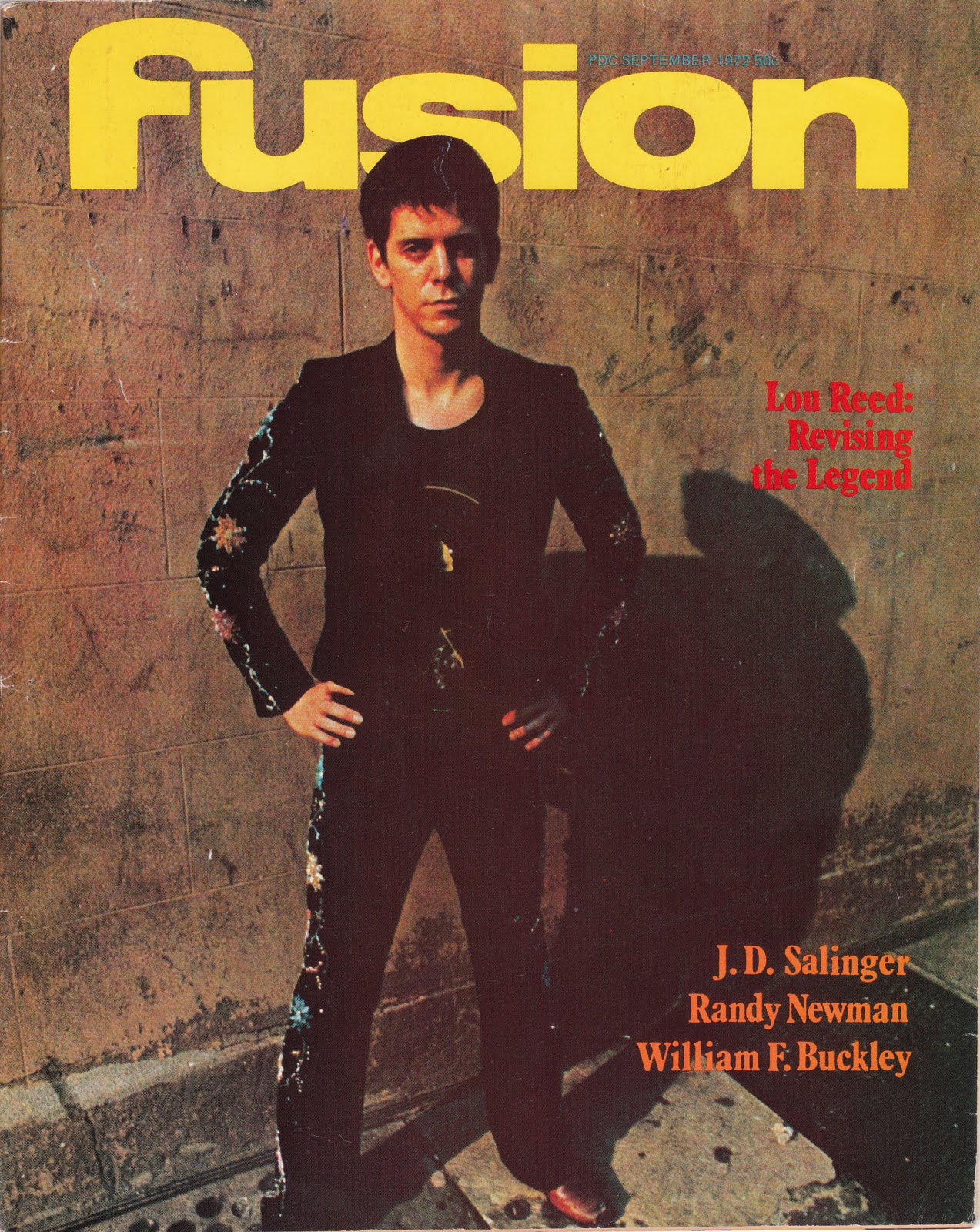 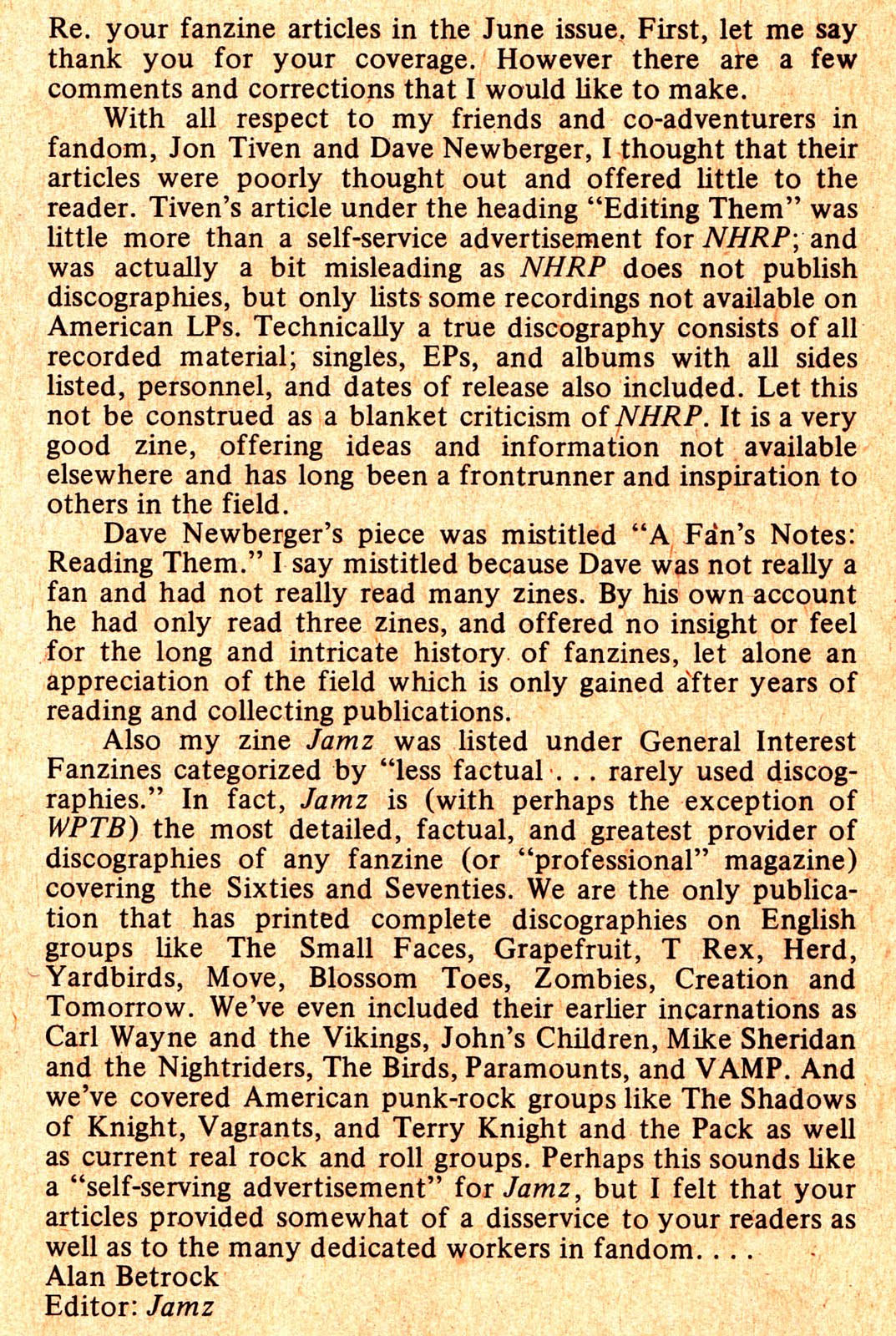 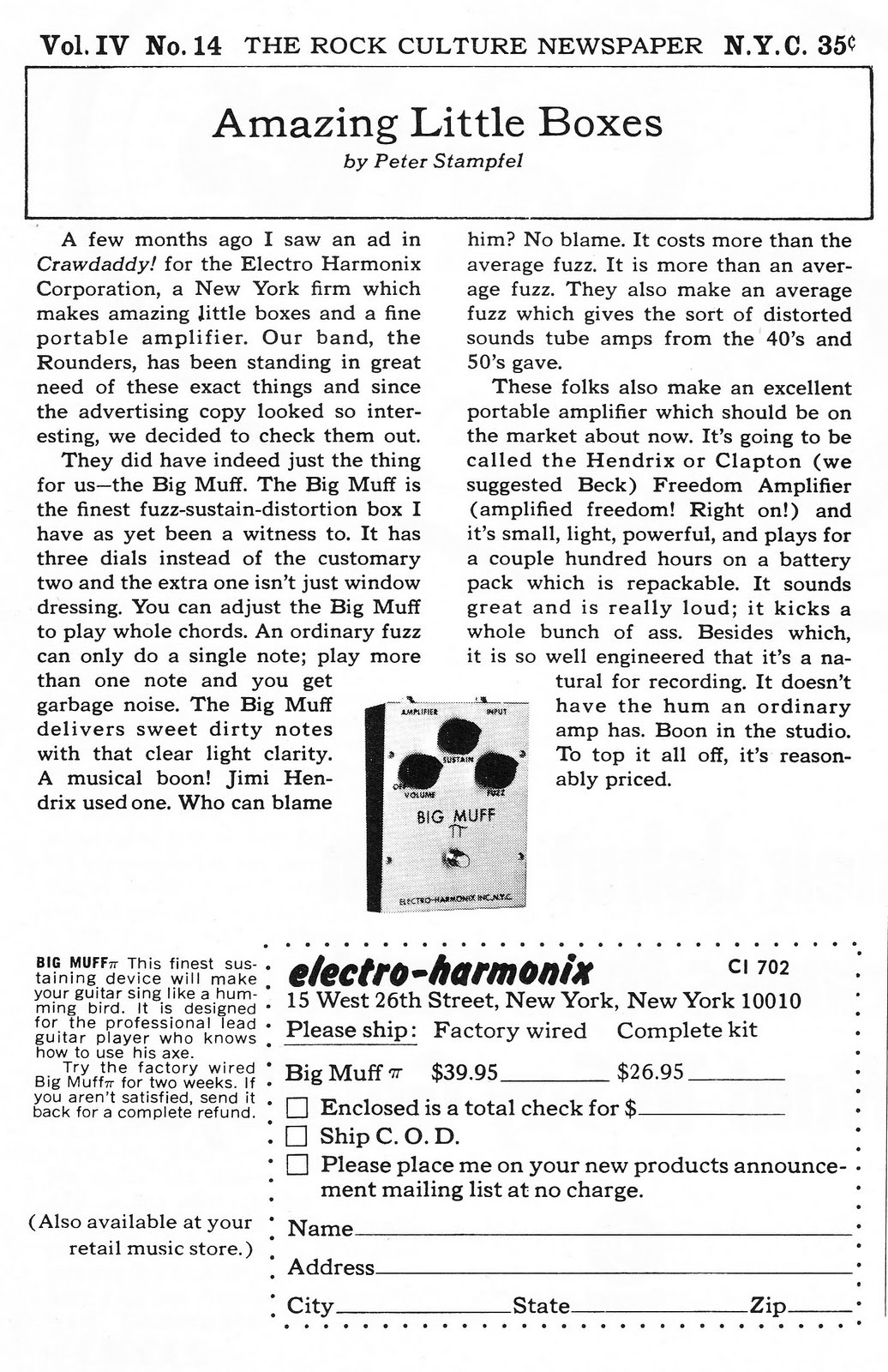 Like the great but seldom seen short film of artist Ronnie van Hout entitled “One Minus One” - yes, the Godard reference is tongue in cheek - of the Gordons live in their rehearsal space on the South Island in 1981 or thereabouts, Stanley has kindly supplied a link to a film by Jud Yulkut of the Godz jamming and partying live in 1966. Man, who knew such great footage existed. Only solidifies my take on the No-Neck Blues Band being one of the great heirs to harnessing that locale (NYC, Harlem to be exact for NNCK) and sound. God bless Dave Nuss for birthing both Metal Blade artists Angkor Wat in Texas and then moving to NYC to give the world NNCK in 1992. Which is why Stanley’s link dovetails so nicely with what I had intended to post today about one the 20th Century's unsung greats: Peter Stampfel and a shameless product plug. Hell, I would have gladly done the same as we are enamored of the product as well. First live show I saw in NYC I think was Gary Lucas and Peter Stampel as a duo so always have a soft spot. Did anyone else catch the Fugs flyer in the Godz footage? Ad courtesy on the mostly execrable Circus Magazine (July ’72, “Manassas” cover). More on that in the future. 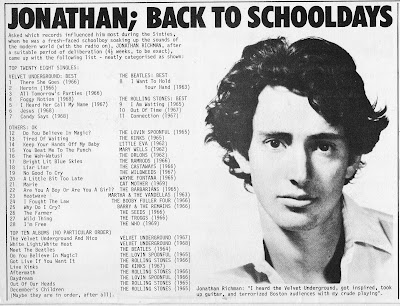 Was August 1977 a changing of the guard moment for the British rock press? I am not sure. That was the month that Kris Needs took over the editorial helm of Zig Zag from Pete “Rock Family Tree” Frame. I have two gems from the last issue of Zig Zag that Frame edited in July 1977 (the one with a most excellent Lee Black Childers cover design with a photo of Johnny Thunders holding a switchblade and looking like one of Keitel’s buddies outta Mean Streets). Just click on the image to make them at least legible. Here we present Jonathan Richman’s Sounds of the 1960’s - at least Jonathan didn’t drop the Spoonful like a lot of the counterculture based on the rumour about Zal. In fact, we need to revisit those albums and Zal’s solo lp again. The second item is dedicated to my friend Tim who was responsible (along with Grady), for starting the West Coast Godz revival in my household. Tim wrote one of the best pieces/interviews on the Godz in his Rock Mag (or Modern Rock Magazine) in the 1990’s and other than Bang’s article mentioned herein, it is essential reading on one of Thirsty’s favourite bands as well. If someone wants to compile the Richman tape and post it in the comments, hey – we would be pretty grateful for the heavy lifting.
Posted by Papa Jon at 3:44 PM 1 comment: 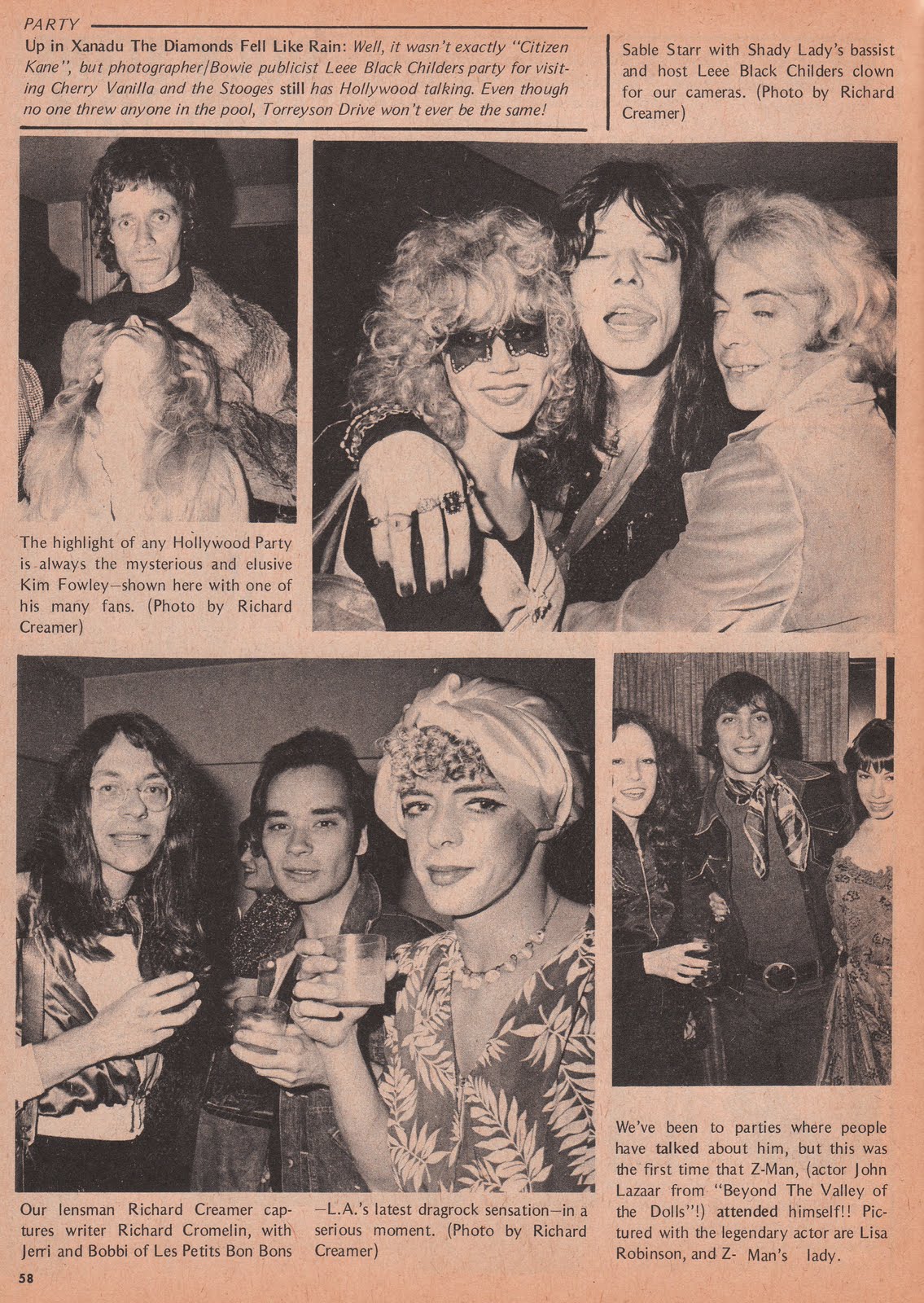 Each picture is worth a long, long glance. After reading Nick Kent’s excellent account of another party thrown in the Stooges honor in “Apathy for the Devil,” it makes sense to me after all these years (37 exactly) why none of the Stooges crashed their own party. Were they living in Lee’s house at the time or staying at the Riot Hyatt? Kent’s book is highly recommended to any rock aficionado. I know some have questioned the veracity of the whole thing. Who gives a toss if you cant put the book down! There are some serious hoots in them pages. The Stooges on the Sunset Strip in 1973-74 is the stuff of legend now. Among the crowd witnessing the amazing run of shows were pre-Weirdos John Denney and Cliff Roman, Don Waller and co., the Denim Delinquent crowd, all of the South Bay intelligentsia including Phast Phreddie Patterson and the rest of the Back Door Man crew, Kid Congo Powers, Claude Bessey, Danny Sugarman and Manzerek, Silverhead, etc etc. Obviously we can now add Z-Man to the equation as well! Was the only actor or actress the Stooges could pull in 1973 Z-Man? Was Mackenzie Phillips there hiding in the back? We all know about who witnessed the Velvets in their final Max’s days but these LA Stooges shows (and the Dolls LA invasion documented so well by Bob Gruen), laid the groundwork for the late 70’s LA music scene which is still today lionized around the globe. Who else saw these show? We need to know.

Other than the party taking place at the Source Family house in Los Feliz about 20 minutes away that night, the party Souther and Henley were throwing in Laurel Canyon celebrating the fact that “Desperado” was climbing the charts ("ka-ching$") or even the Cher/Geffen soire on the westside, this was THE epicenter that late summer night in 1973. At least I can say I was in the same city at the same time. Enjoy the barn excavation. 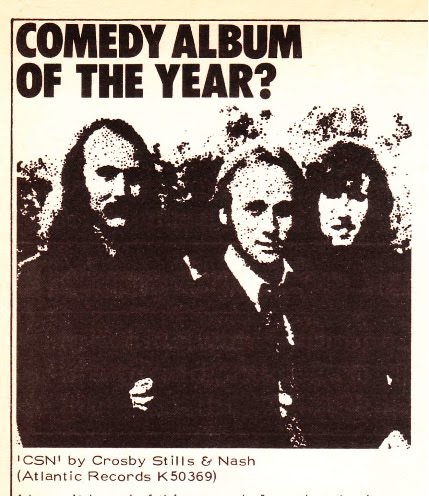