Baby Jane's in Acapulco, We are Flying Down to Rio/Dan Flavin and Stairway to Heaven/The Pensioner 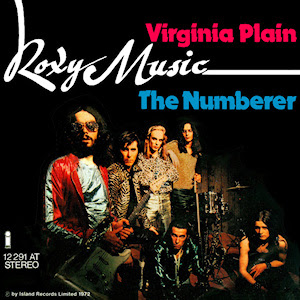 For the past several decades, I keep coming back to the first five Roxy Music lps as a highwater mark of seventies popular music. Can you name another group or artist who had as good a streak during the 70's who can claim the VU as a front and center influence (other than the Ramones) and put out five great albums in a row? For most critics, Eno gets a free pass for his 70's solo work. When he moves past his suppressed rockist tendencies, the music goes limp. It seems his extracurricular activities gives him the high grades. He records Television with Richard Williams at their near height and then co-opts an entire scene a few years later (thank you for the document though). However, Ferry as person and solo artist is ridiculed. Here is Bryan at CBGB's in 1975 catching the Ramones pre-lp (photo courtesy Danny Fields) - where were you: 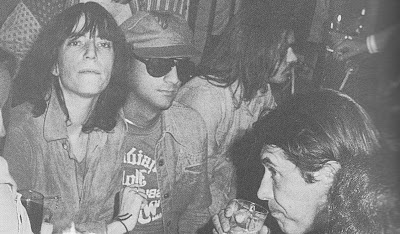 We first got those blue firemen's jumpsuits and we wore those masks that took your faces away, cause what we decided that what we hated about rock & roll was STARS -- we watched Roxy Music, a band we liked, slowly become Bryan Ferry & Roxy Music. If you got a band that's good, you bust it up and sell three times as many records. Take the Beatles for instance, the magic was in the combination -- nothing that any single Beatle did after that matches up. (Search & Destroy, 1978). 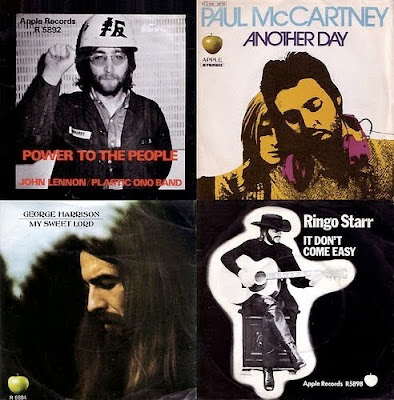 Well I can argue that one with Mothersbaugh till I am blue in the face but it won't change his mind. Eno is lionized for his solo lps (rightfully so in some cases) and Ferry is accused of being a STAR. And, as anyone who knows me well, I can talk the merits of "Beaucoup of Blues" as ranking up there with Beatles '65. (Aquarium Drunkard image of first four post-Beatles solo singles).

Here is Ferry paying his respects as only he can (with Spedding on guitar). Dig the great Dan Flavin/Powell & Pressburger homage. Eno can only wish he could grow such a beard!!: 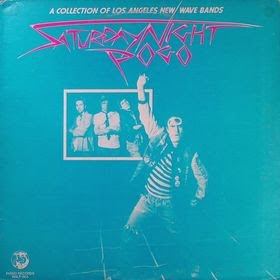 Is Richard Meltzer embarassed by the 1978 Saturday Night Pogo cover? As a teenager, I was embarrassed by the image. Meltzer was 33 years old when he posed for the cover. At 34, he lionized the Germs (GI) lp in a rave Los Angeles Times review which demonstrated he hadn't lost all his marbles. In fact, it is among his best reviews of albums he actually listened to. Courtesy of Dr. Riff Buttons, you get to hear the LA radio ad for the lp plus some added Rodney bumper commentary:

The Saturday Night Pogo lp would seem to be a b-team of the LA punk era, right? Well yes and no. The Radio Free Hollywood crowd never really got their due with all the revisionist history of what constitutes year zero of LA punk. I agree it is no "Tooth & Nail" or "Yes LA" but there are some shining moments. Who among the best of the old guard Hollywood punks pre-Masque have not gotten their due? Well, let's see. The Droogs are from the Valley (and worthy of their own post) and the Dogs are originally from Detroit. So I guess that would leave Saturday Night Pogo stars, the Berlin Brats. Rubin Fiberglass and I would both agree going back to our Santa Cruz days, that "Tropically Hot" off that lp and the 45 are among the great unsung Dolls/trashy songs you never heard. At Waitakere Walks, that sort of thing is our bread and butter. Both the A and B side of the 45 are among the best pre-hardcore punk 45s to emerge from Los Angeles - that is if you like the Dolls, Stones, early rock n' roll etc. A battle royale of Clap, the Berlin Brats and the Imperial Dogs could get pretty bloody (Daddy Maxfield had already split the scene). As a pre-teen, the fact that the Berlin Brats were in "Up in Smoke" did not register. The Dils later did, but I swear, so brief is the appearance of the Berlin Brats that it is missed if you so much as sneeze. Just as memorable may be the image of Rodney with his glam mullet wearing a Sex Pistols shirt at the side of the stage with Cheech Marin. I wish Fowley had made the cut. Somebody get Lou Adler on the line so we can get the full footage released!! Here is all there is:

Here is the great 45 of Tropically Hot/Psychotic:


What has been a real revelation at headquarters are the 1976 Berlin Brats demos and some live shows of the same era. Here is the demo of "Tropically Hot" slowed down with some very sweet acoustic overdubs, the great "Do I Love You Today" and a live cover of the Animals "It's My Life" from Hollywood 1976 - we need the 180 gram pressing of this stuff:

Back to Saturday Night Pogo, here is a clip of VOM at Malibu Beach (?) performing their track from the lp. Meltzer does undo some of the damage from the lp cover here and we do love Gregg Turner's vocals which he used to great effect in his next project: