Jay Babcock at Brown Study has posted his excellent Black Flag pieces from last decade in their unexpurgated form, originally featured in Mojo ("Their War: Black Flag - The First Five Years," Dec. 2001) and the LA Weekly ("A Twelve-Step Program in Self-Reliance: How L.A. Hardcore Pioneers Black Flag Made it Through the Early Years," June 22, 2002). In addition, he has put together a nice compendium of video clips featuring Pops Staples, who on some days to my ears is the foremost influence on Sandy Bull's playing, other days just in the top five.

I ripped out the note below from the LA Reader in '84 for the live shot, probably not realizing that in the future there would be coffee table books of photos of bands like the Stooges, New York Dolls, Black Flag and the Ramones. Thus, from the barn comes a short note urging you to get in the tardis and head to Pasadena, CA. 1984. 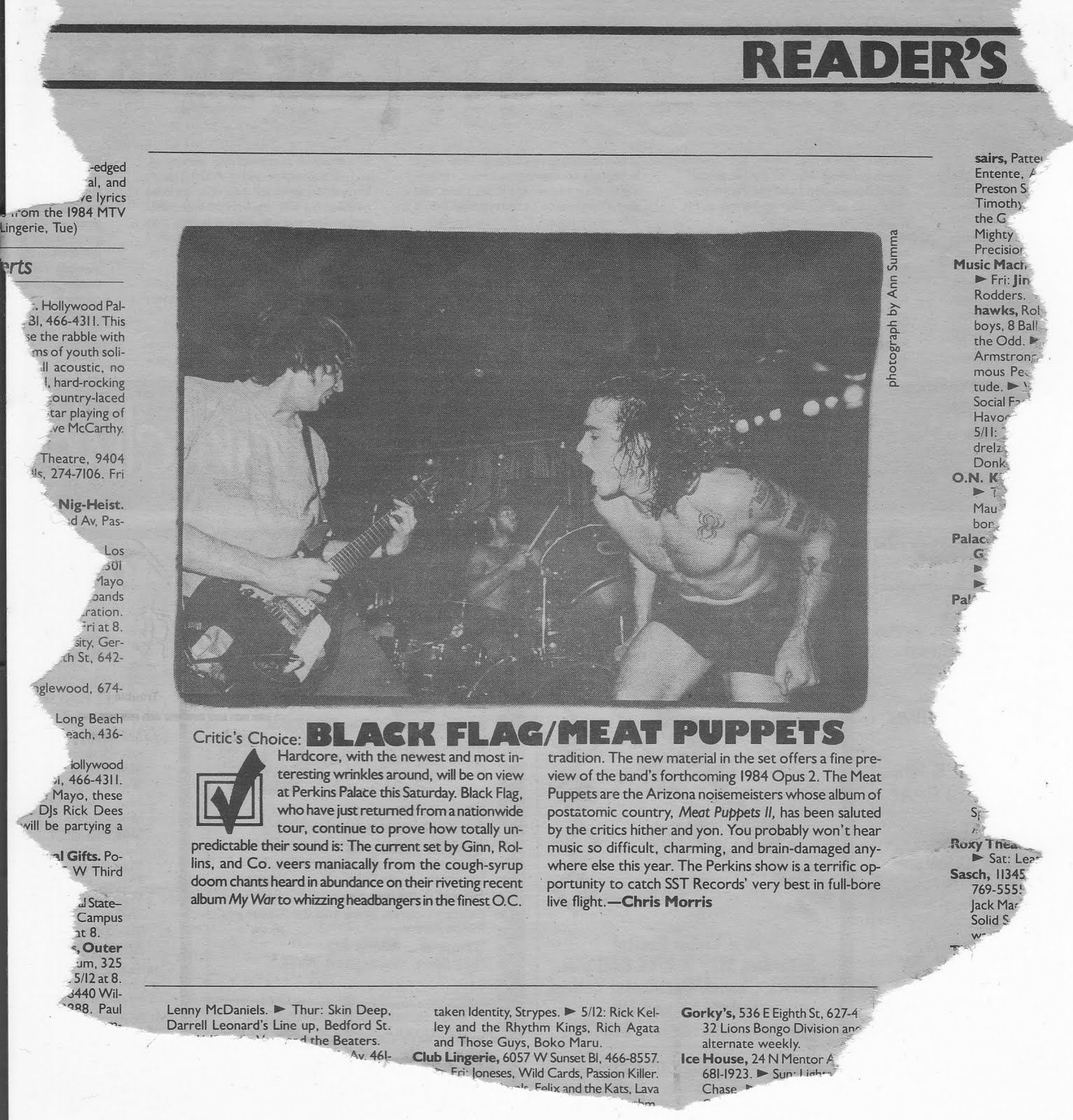 Lastly, anyone know how to get ahold of Earl Liberty of Saccharine Trust? I know he is on twitter but need an email address.
Posted by Papa Jon at 2:26 PM 1 comment:

This clip of Iggy on European television is a favorite Iggy performance art piece - just watch with the sound off if you don't believe me - and the song itself possibly my original introduction to Mr. Pop based on its heavy rotation on KROQ during the summer of 1981. Although it could be a new wave Fowley track at certain moments ("Bad News from the Underworld" era), what speaks to me most are the Marnie Weber-esque "Spirit Girls" - or did Iggy wander into a J.C. Penney catalog photo shoot with raining ping pong balls. Obviously, the Ig's favorite golf balls were out of the question with young children around. Now, I have not seen it broken down before, but Iggy's use of baritone sprechstimme (e.g., "phone calls I take by machine") and borrowed from Morrison perhaps, is really one of his signature vocal devices. When my book comes out, you can cite me. The outfit - a post-Johnny Thunders/Edwardian pirate look? I love it and find it inspiring. I swear I saw Stiv in person with this look several years later (similar shirt, tight pants etc) so the influence continued. Or is the real rock and roll look untrademarkable? The whole look is almost something Jack Grisham sported during the "Beneath the Shadows" era and of course, one could picture Darby co-opting the entire look.

I am still waiting for my old friend Tim to write his book on post "Let's Dance" Bowie. One of these days he is going to do it. By then, Bowie will have pilfered the entire Iggy catalog. Can't wait though till David gets to "Cold Metal," "Butt Town," and "Wild America."

A whole post could be devoted to the filming of this on Hollywood Blvd. Blink and you could miss Waitakere Walks pal Damon:

I somehow forgot that Rollins is on this:

Hullo America! Man, this captures the late 80's in a big way. Maybe a post is in order of Monoshock and pals heckling Messers Pop and Jones at this tour. "Let's hear it for the singer!"

The Night the Misfits met Mötley Crüe/The Misfits and the Flesheaters at the Whiskey a Go-Go April 13, 1982

The Misfits’ April 1982 West Coast tour is still pretty fresh in my memory. A short book about that tour needs to be written given that there are so many funny anecdotes and great photos to work with. The ad below was on my bedroom wall at the time and also possibly that of Rubin Fiberglass as well, who kindly donated his copy to the barn archive well over twenty years ago, thus doubling its number in my possession. Though we both claim to be the first to grok the Misfits among our junior high classmates at our respective schools, a trip to any mall today within a ten mile radius of Canoga Park – nay, anywhere in the English speaking world based upon my own southern hemisphere observations – will demonstrate how deep the entrenchment of Danzig’s vision among 12-15 year olds of all ethnicities. Mind you this is simply based upon my own accounting of both the bootlegged and unbootlegged paraphernalia of the band. Clearly, Danzig’s vision is omnipresent. Remind yourselves though that the 30th anniversary of the April 1982 jaunt is coming up! Too young to attend the show, I only recently found out that the Flesheaters did not actually play. 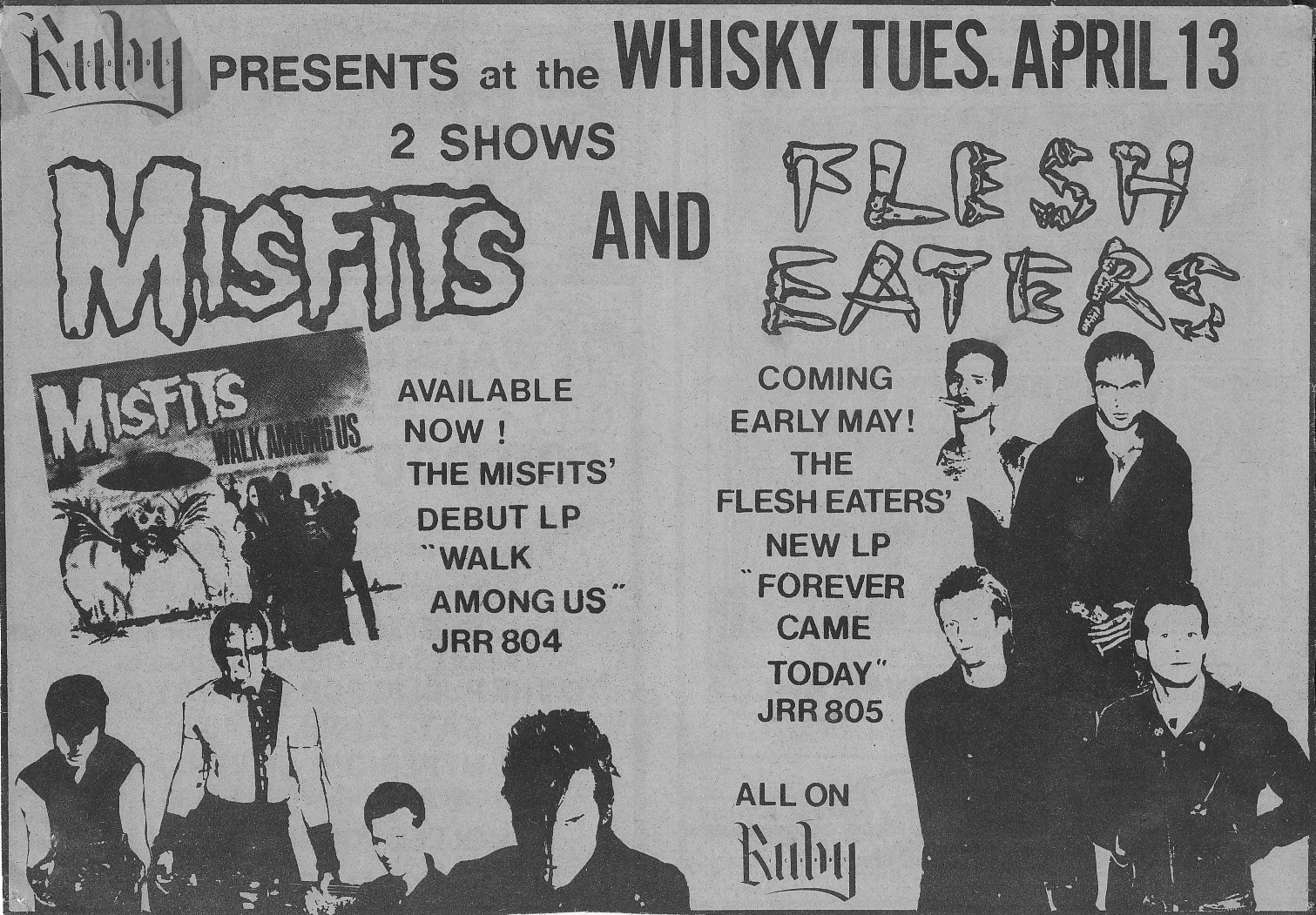 I have written about Byron Coley's Motley Crue book before, but how this particular story was missing will need to be corrected in the next edition. According to none other than Misfits Central writing about this very show:

Before The Misfits' show at Whisky A Go Go in Los Angeles, the band allegedly chased the members of Motley Crue (as documented by Eerie Von in The Misfits Box Set liner notes) down the street. According to Henry Rollins, Motley Crue vocalist Vince Neil walked into the bar while The Misfits were doing their soundcheck and Jerry, Doyle, and Danzig began heckling him from the stage. At that point, Neil supposedly turned and ran out the door. The scheduled opening band, The Flesheaters, were replaced by Saccharine Trust. Both Earl Liberty from Saccharine Trust and Rollins (who provided guest vocals on "Bullet" that night) appear on one of the covers of the Evilive 7" EP, in a photograph taken that night. Also in attendance for The Misfits' set was Rick James.

Glenn confirmed it a 1997 interview and still gave high marks to Black Flag, dissed Kiss etc. There is a whole article on how intertwined the Black Flag/Misfits Pete Frame rock family tree is forthcoming on this site:

SECONDS: Is there a story of you and Henry Rollins chasing Motley Crue down a street ?

DANZIG: Not down the street, but we ran them out of The Whiskey when The Misfits first played there. It happened and it was pretty funny. You know, Motley Crue got a lot from The Misfits -- so did Rick James. Up until then, Motley Crue was a Dolls imitation and then all of a sudden they were into "the mark of the beast." So many bands have stolen from shit I've done -- I don't care anymore. The only one I really hate is Stone Temple Pilots. They out and out stole "Snakes Of Christ" and renamed it "Sex Type Thing." I did Lonn Friend's radio show and he goes, "You know this song?" and puts on what I think is "Snakes Of Christ" and all of a sudden I hear this doofus going, "I am, I am, I am," and I'm going "Who's this?" "Oh, this is Stone Temple Pilots. This song sounds familiar, doesn't it?" We played them back to back and they were exact.

SECONDS: What was the real deal with the notorious Misfits incident in San Francisco in 1982?

DANZIG: All night people were getting hit with bottles and beer cans. These kids had singled out Doyle and were hitting him with full beer cans. Finally, Googy jumped in the audience in the middle of a song and started a fight with one of the guys throwing beer cans at him. It was a big fight, Googy started getting his ass kicked, and Doyle saw one guy throwing beer and hit him in the head with his guitar. It just went crazy after that, a big riot basically. I remember when Maximum Rock N' Roll did their story, it was one-sided that everybody wanted The Misfits gone but that's bullshit because a lot of people had come there to see The Misfits play. It was typical yellow journalism from Maximum Rock N' Roll.

There was no shortage of zine ink spent on that tour. I have already posted a review of the Chicago leg of that tour ("Misfits at Misfits" in Coolest Retard here). There is of course the We Got Power April 13, 1982 interview by Jordan Schwartz, Dave Markey and "Ru" at Rachel's house right after the very show the advert is from - read it here. Mere hours after heckling Vince Neil! If I could find my copy of Flipside I would scan it but this will have to do for now. Al and Hudley's interview - which I probably had not read since its publication - made me remember how unflatteringly neanderthal the Lodi crew was in their belief system. Check out Glenn's "ju-ju bone" video for further proof and a belly laugh. The '82 SF show pictures were something else, like right out of one of those 70's pro-wrestling magazines. A lot of blood, make-up and fake menace.

I also found this short note in the barn with the show advert. I received it probably some time in late 1983/early 1984. I was a teenage hardcore nerd, and it was a bummer to be told by father x-mas himself that the Misfits were over (though the merch would live on!): 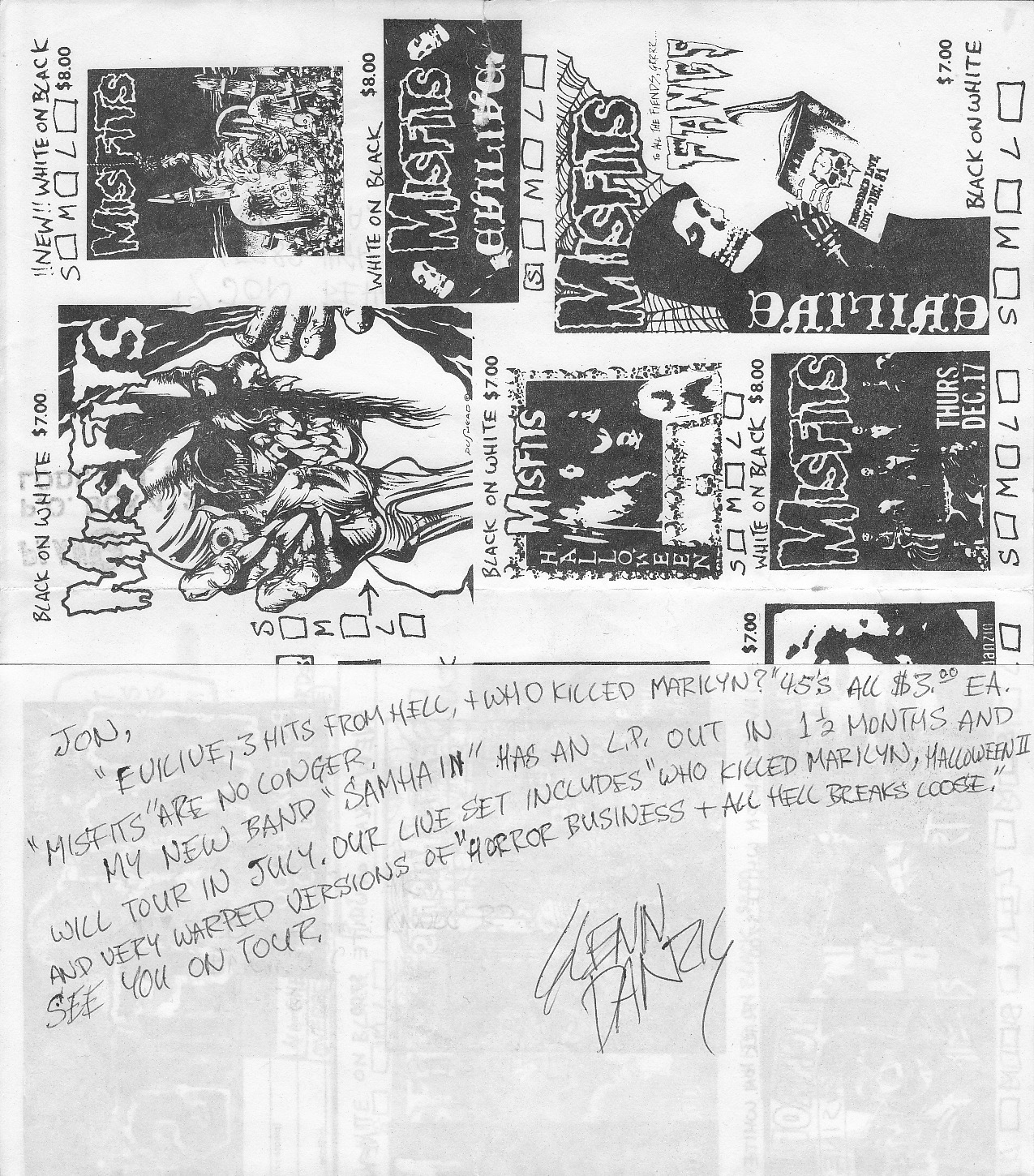 Lastly, Rollins interviewed last month, where he has some funny stuff to say about his old friend Glenn.