Pleasant Gehman always loomed large as I was getting into music as a teenager, firstly from her association with the Germs and Go-Go's, then from her LA Weekly by-lines and performances with the Screamin' Sirens. By the time I became aware of who she was, Lobotomy magazine was long gone. She features in so many iconic images of the era, mostly shot by Jenny Lens but I am sure Donna Santisi has quite a few we haven't seen yet. She was as much the "it" girl of the early LA punk scene as Trudie Plunger or Alice Bag. Pleasant was a great link between the NYC bands of the era and LA, whether it be visits by the Ramones, the underrated Mumps (who need their own post), or case in point here, Blondie. Was Jeffrey Lee Pierce still the president of the Blondie Fan Club as late as July/August 1979? Man, those early shows in LA by the NYC bands would have been amazing. The handful of folks at that first LA Ramones show included people like John and Dix Denney of the Weirdos, Brian Tristan (aka "Kid Congo Powers"), Phast Phreddie, Plez and who else? Did Iggy show up with an "appearance" like on Patti Smith's "Teenage Perversity" bootleg at the Roxy in early 1976. Blondie and Tom Petty would have been quite a show as Pleasant recounts. Did Dwight Twilley attend that show? Sometime in late 1978, Pleasant and Kid Congo moved to NYC for six months and lived with Teenage Jesus drummer Bradly Field and Kristian Hoffman of the Mumps.

Pleasant came to LA in 1975 from New York and landed at Uni High where she fell right in with Paul and George before they became Bobby and Pat. Plez's dad was a "new journalism" guy as well as penning liners for jazz records. Hep, no? Ditching school to attend Runaways rehearsals always seemed like a good idea. Hanging out with Belinda after she drove into Hollywood from the DEEP valley (Newbury Park) unlike the Denney Bros. original sojourn from North Hollywood over the hill. Maybe the genesis for the Blondie profile kicked in while Plez was living in NYC and seeing how big Blondie had by then gotten? In any event, no last name is given for the article but it only makes sense that it is Ms. Gehman. Bangs' quickie book was from around this same time. We wait for Pleasant's memoir if she takes enough time off from belly dancing. We offer our services to edit.

As to Spider, it came from of all places Ventura. Not exactly an epicenter for high energy rock and roll until Grady's Record Refuge opened - unless board sports is your thing. Mea culpa, I saw the Dead a number of times in Ventura and I swear I saw Ginn at a show but I may be wrong! I love the fact that it bills itself as "America's REAL Rock 'n' Roll Magazine." The coverage is a-ok for the time though Slash it ain't. Spider was really a photo magazine, given that Spider took photos and published others by Donna Santisi and David Arnoff. Anyone know how long Spider ran for and if they can locate the other issues for me. The editing could have been tighter (spell check, etc), but hey, it's mostly about the photos. 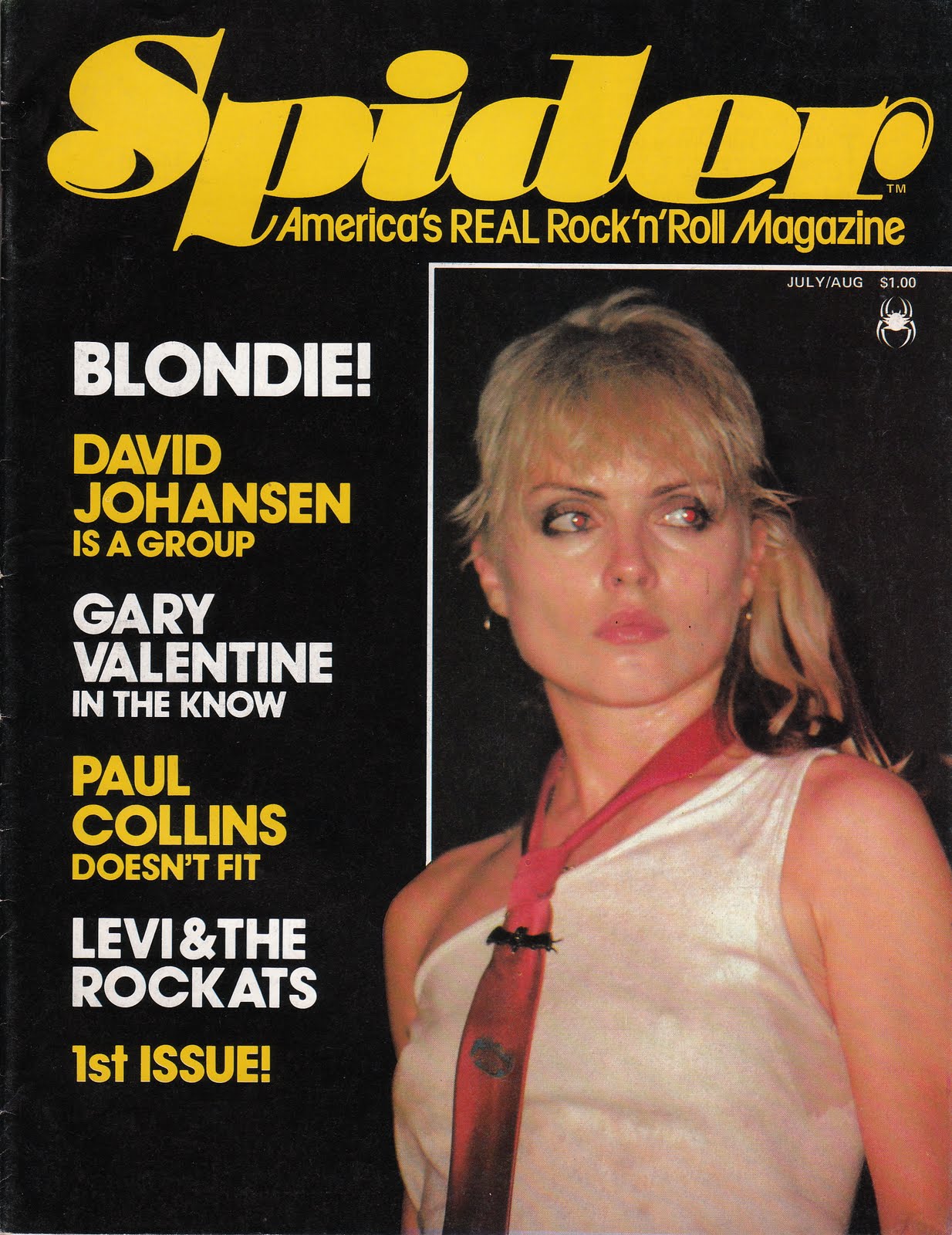 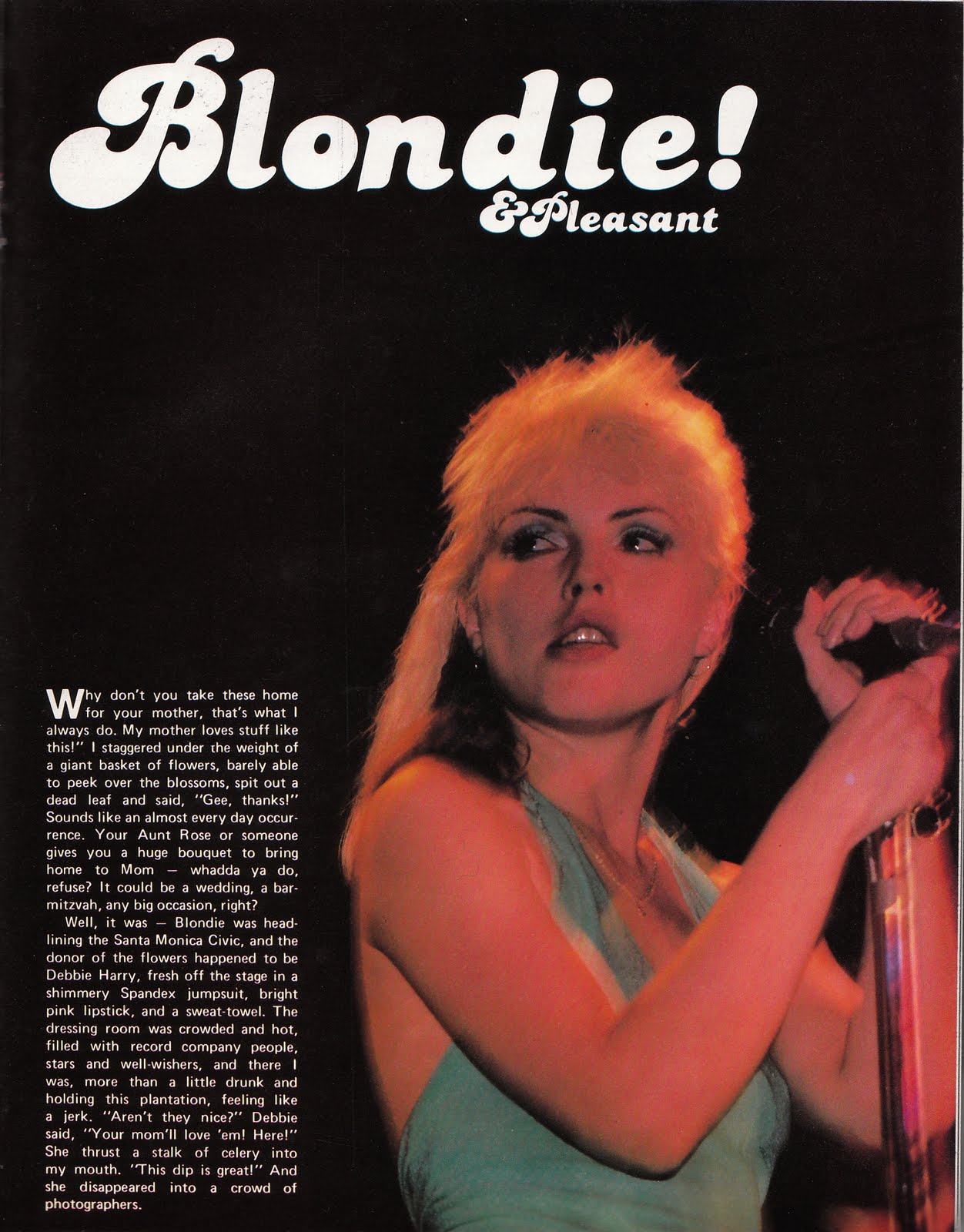 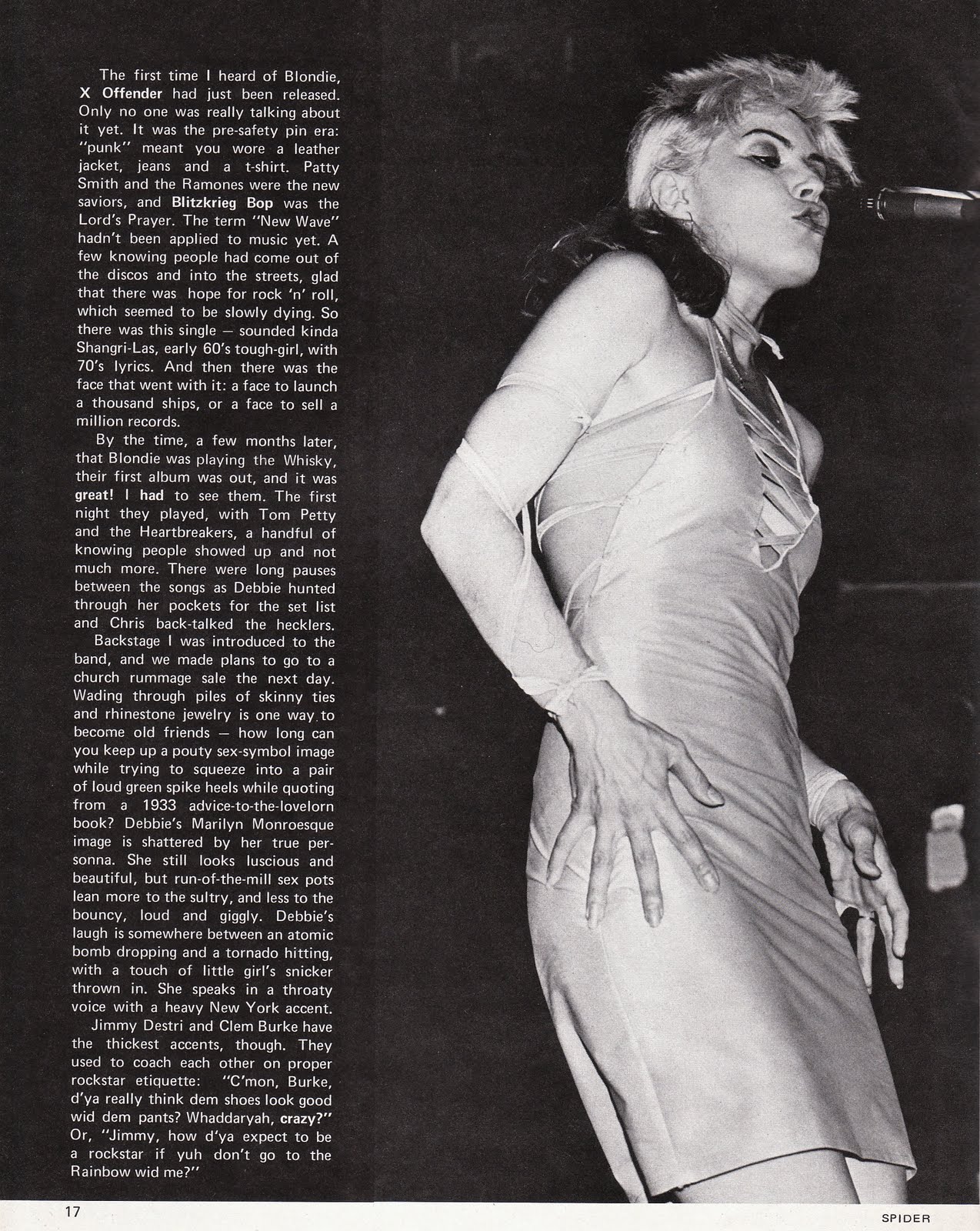 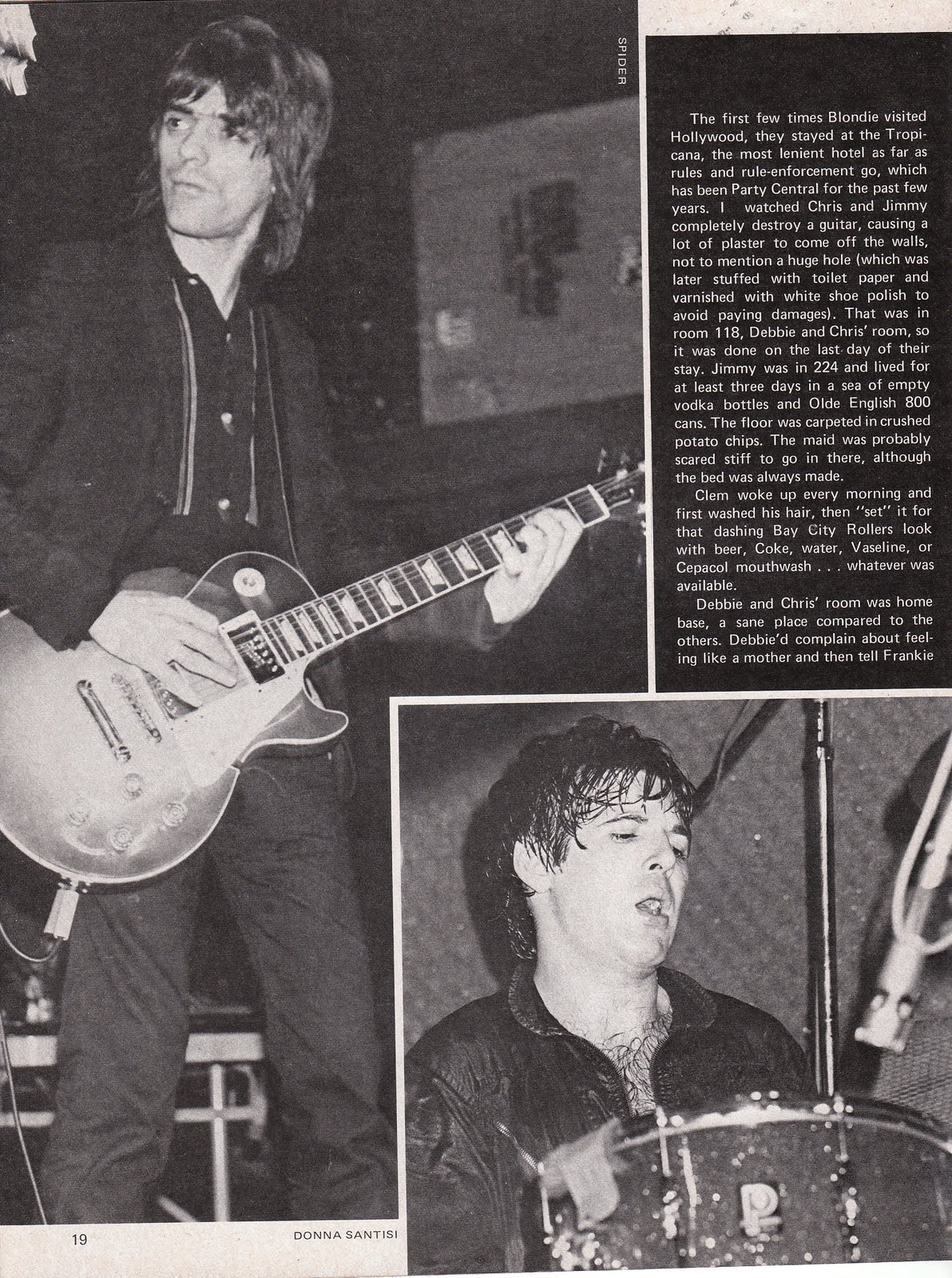 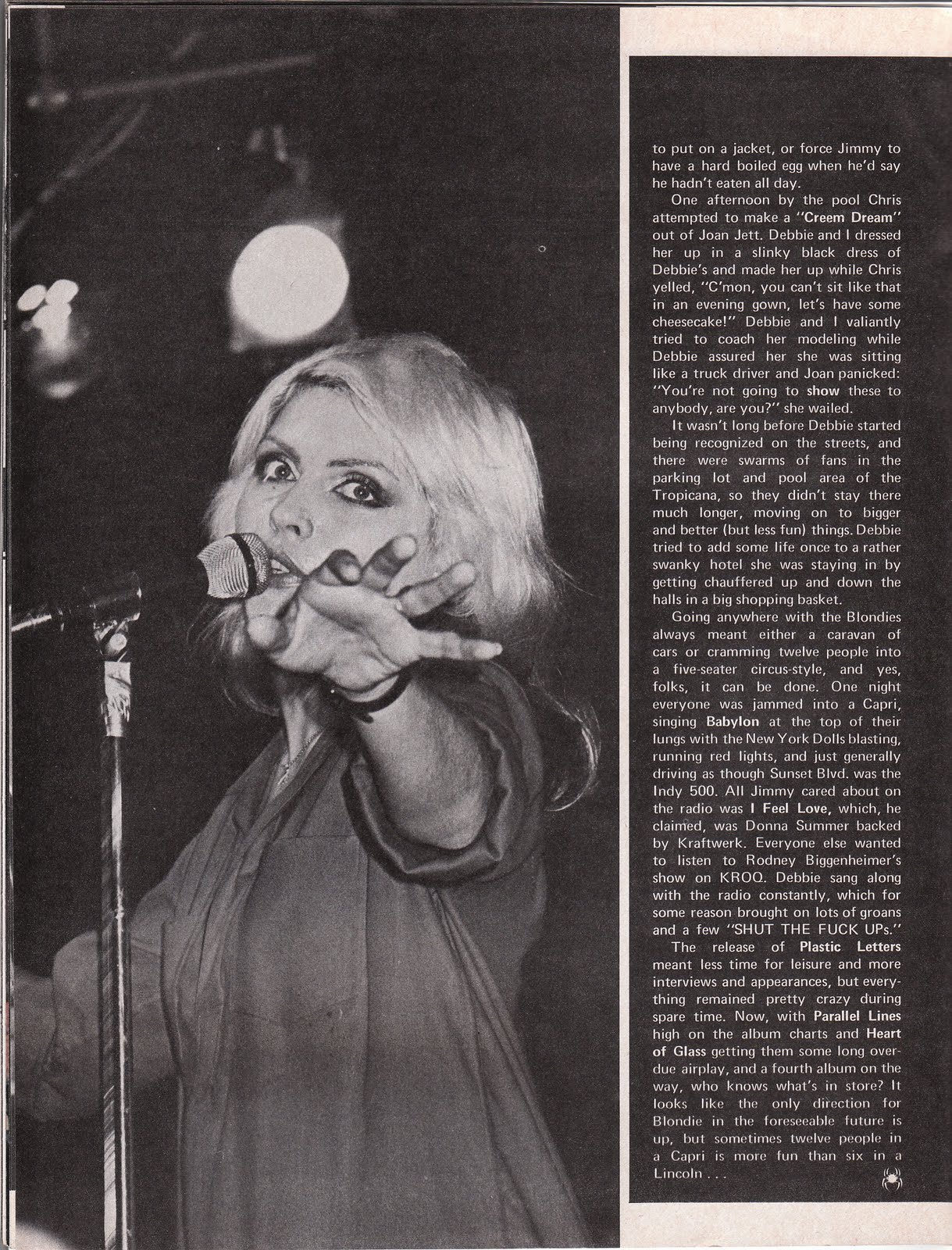 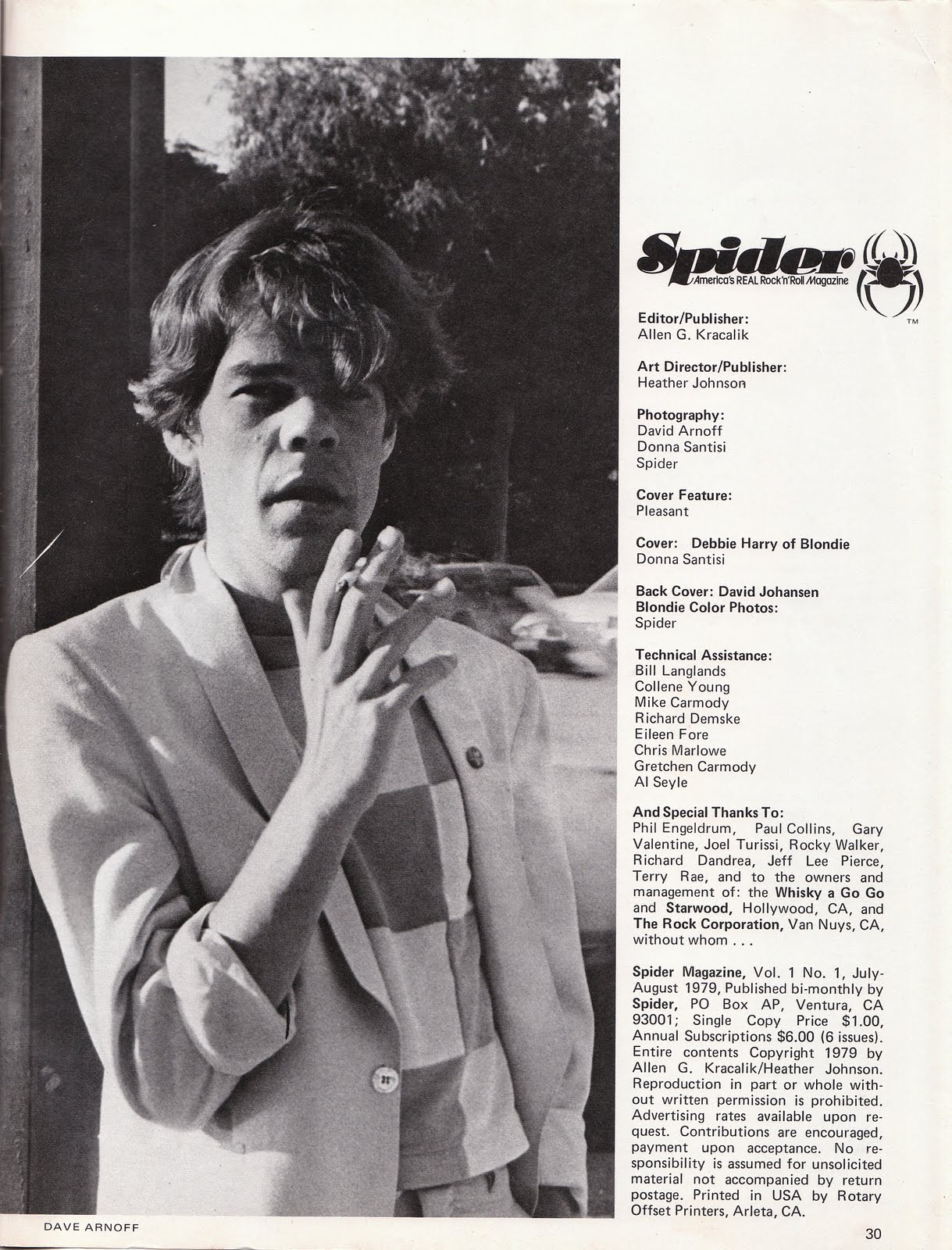 You all have read Meltzer's account of the trials of publishing "Dolphy Was Some 'Weird' Cat." Meltzer, Richard. A Whore Just Like the Rest. Cambridge: Da Capo 2000. How was Bob the editor of the Voice with opinions such as this from August 1973: "but like all theoretical hard rock, [The Stooges] music was accessible only in theory." Read on as it only gets worse or more cringe inducing. Wrong in oh so many ways on the Stooges that this one is more for the 2011 peanut gallery to laugh at. Great quotes though. Oh yeah Bob, I guess you didn't really grok Peter's other fave Von Lmo either. Time has shown that Crowley's taste was pretty classy and timeless. I guess you didn't ask him to contribute to Stranded. Roll on! 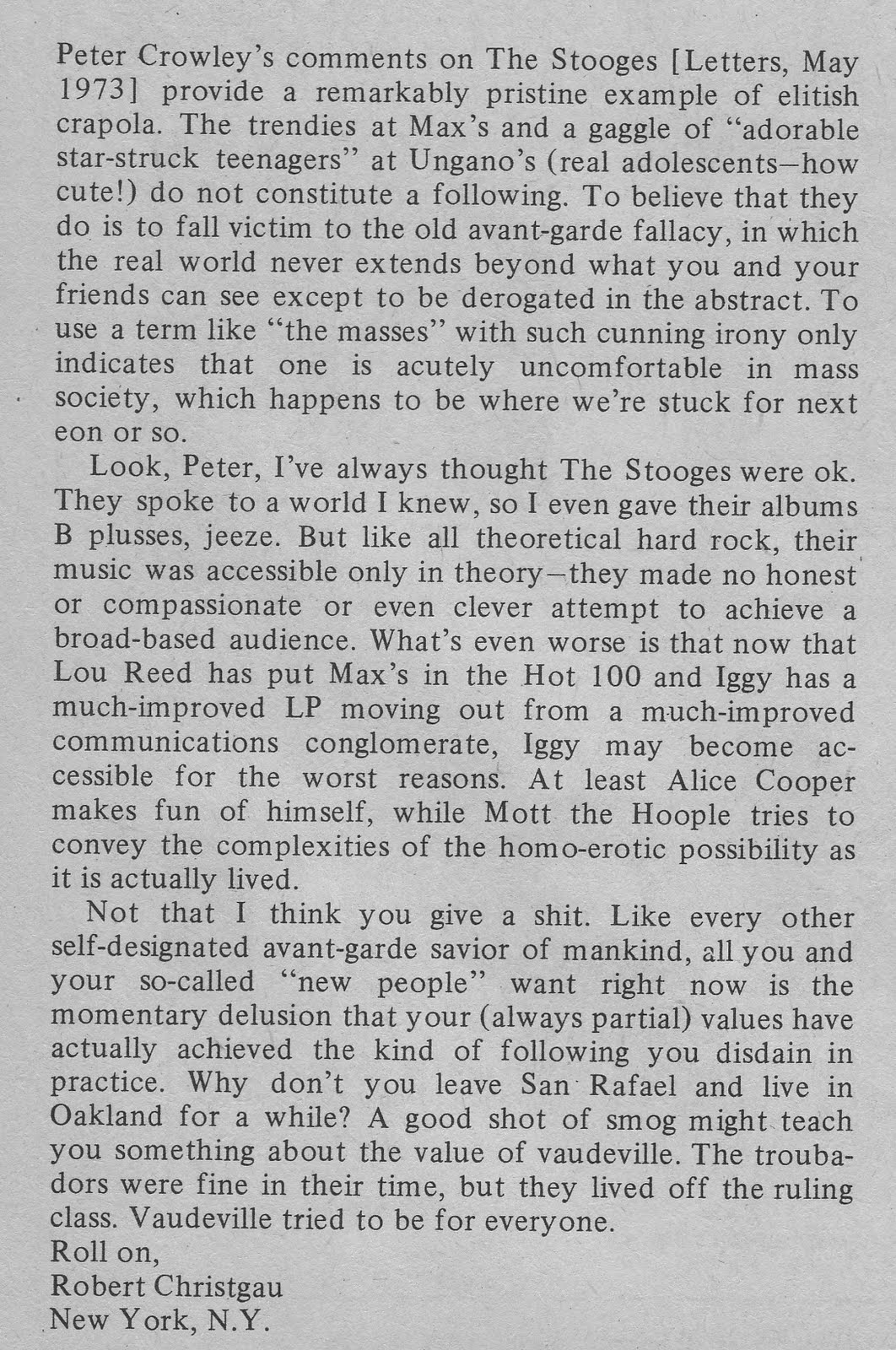 Richard Meltzer is going to be 65 this year. When the oracle chooses to write about music, one needs to pay close attention. Even his toss offs are great. Case in point is this column for the San Diego Reader from June 1999. Too late for inclusion in "A Whore Just Like the Rest," Richard still riffs on his favorite Doors, Monterey Pop versus Woodstock, the Byrds and the Association. He is a bit too harsh on the Monkees for my liking - their records have aged nicely. As Eddie Flowers has said (or a paraphrase as such): "Headquarters"= summer! Growing up those lps were some of the only "rock" lps in the house. But what the fuck do I know - I wasn't at Monterey. I came across this barn archival piece in connection with research on Meltzer's take on the Jefferson Airplane. According to Tamarkin's book, the Monkees' "Headquarters" was firmly lodged at Number 2 on the charts after the Beatles "Sgt. Pepper" in '67, thus keeping "Surrealistic Pillow" blocked permanently from the top spot. Though a no show at Monterey, Macca did head to SF in '67 and spent a day being shown around SF by Marty, Jack and Jorma, and also did acknowledge the incredible playing of Jack - did Jaco Pastorius copy prime Casady or what. Apparently, Jack jammed with Hendrix till dawn the night of Monterey whilst both were tripping. Meltzer where were you and Pearlman hanging out? Anyone sat through the entire Moneterey Pop Pennebaker dvd box set to report whether it is worth seeking out? 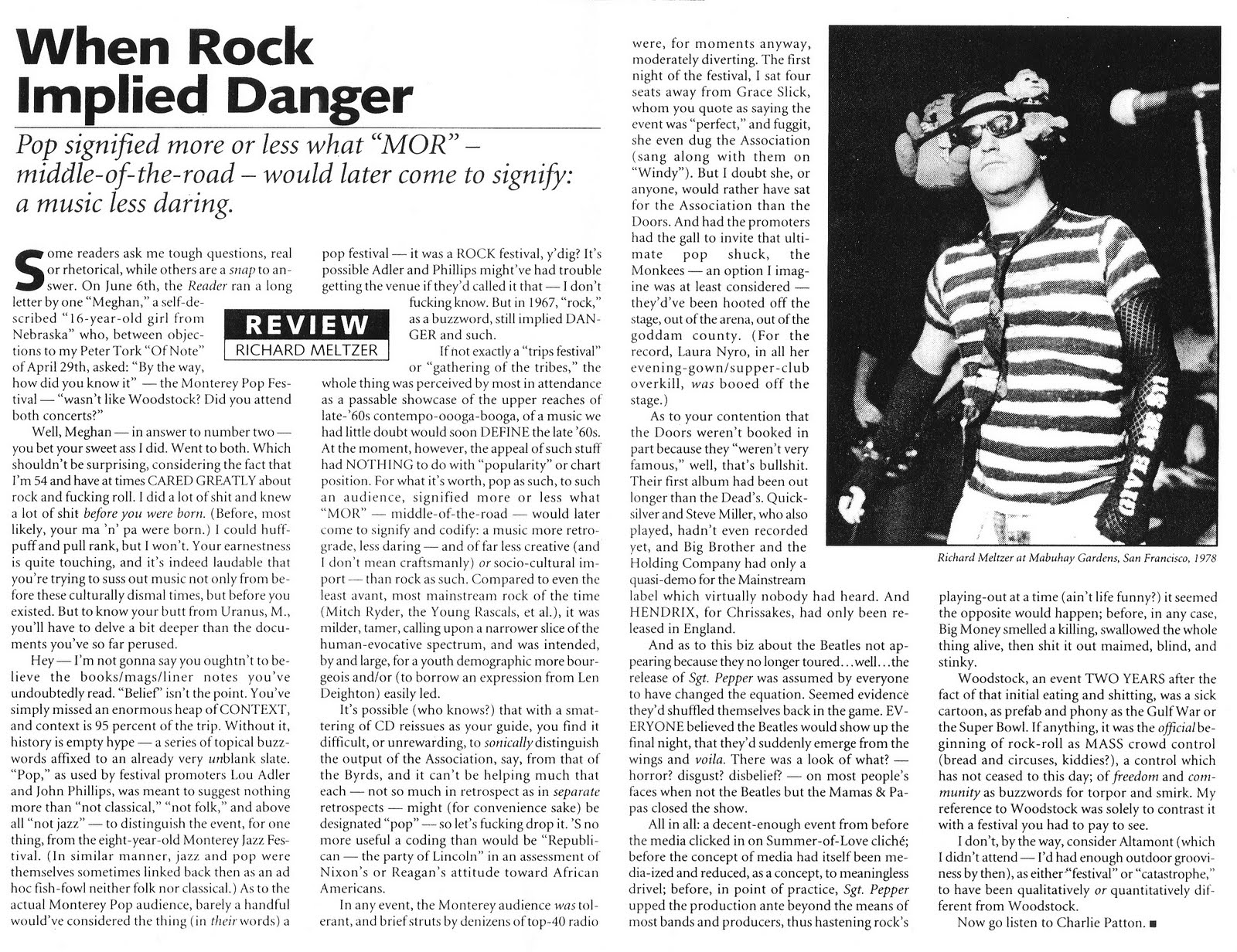