Ah, the 70's. Neil Bogart threw quite a party that launched his Kiss goldmine. I don't think such a party would/could exist in the shambles that is today's "record" industry. From his stint at the delisted Cameo-Parkway, somehow Bogart just knew that there was gold in them hills. The movie "Casablanca" was the theme. Hugh Masekela came dressed as a Nazi, Iggy Stooge as himself! Now we normally don't associate Iggy Stooge in any way with Casablanca records. Yet his band did share the stage with Kiss (and BOC) just months earlier on New Years Eve 1973 at NYC's Academy of Music. Thanks to Lisa Robinson we have evidence of both Alice Cooper and Iggy checking out the scene/Kiss at the launch party of the weird label that was Casablanca. Again, we ponder who has Richard Creamer's negatives. I volunteer to edit the coffee table photo book for free. Even stranger for any Los Angelenos out there was the locale - the Century Plaza Hotel in Century City. At the Century Plaza hotel!! That hotel is the basecamp for political campaigns on election night and not for dressing in Nazi finery (even if was for Casablanca the movie). Now all we get at the Century Plaza is the stage where the likes of the Reagans, Andy Williams and foreign fundraisers are held. Wow, the 70's were weird and the money was crazy in the music biz and only about to get bigger for Casablanca. Beyond the weirdness of the photos, the hypocrisy of the costumes should not be lost on any Stooges historians out there. So, let me get this straight, Ron gets heat for wearing his, um WWII "collectibles," but Hugh gets a pass. Ron was ahead of his time on all fronts and fashion forward. I still try to emulate the guys style in 2010 to no avail.

At least the Coop came in a newsboy cap with beer in hand to see who would soon dethrone him in the teenage camp. Come on Alice "Muscle of Love" to "Welcome to My Nightmare"? Sorry dude, but I have to say the string of "Kiss," "Hotter Than Hell," Dressed to Kill," "Destroyer" "Alive" and "Rock and Roll Over" - in the span of two years - kinda trumps the dancers and cyclops. Bonus points are given for the great "Only Women Bleed." In my book the Coop's 1969-1973 run (earlier if you include the AZ singles) beats anything Batliz or the "Demon" scraped together. There was time when it was ok to like the Dictators, the Coop, early Kiss AND the Stooges. See what too much exposure to these folks courtesy of reality television can do to your place in the teen rock canon.

Pose for the camera Iggy. 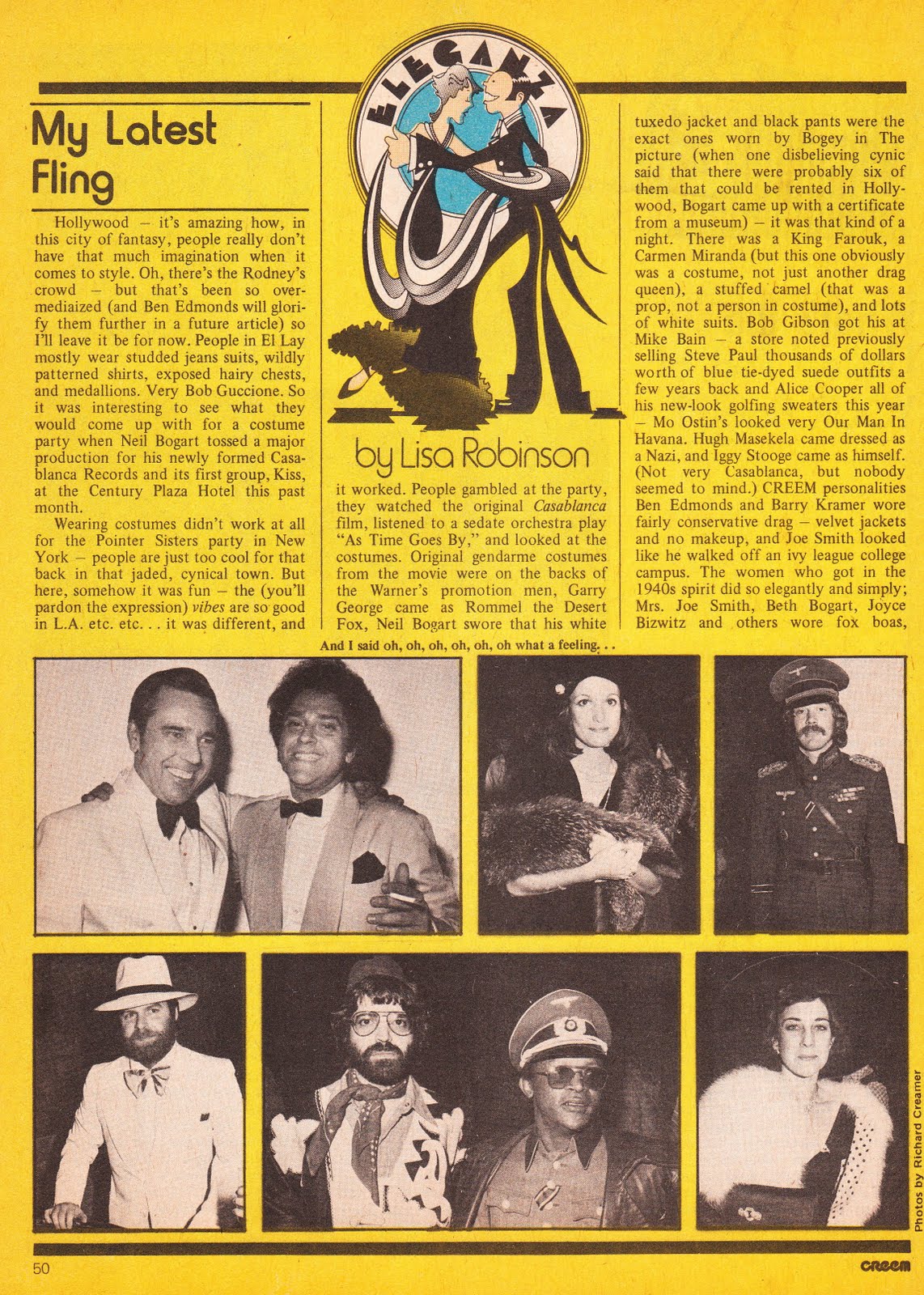 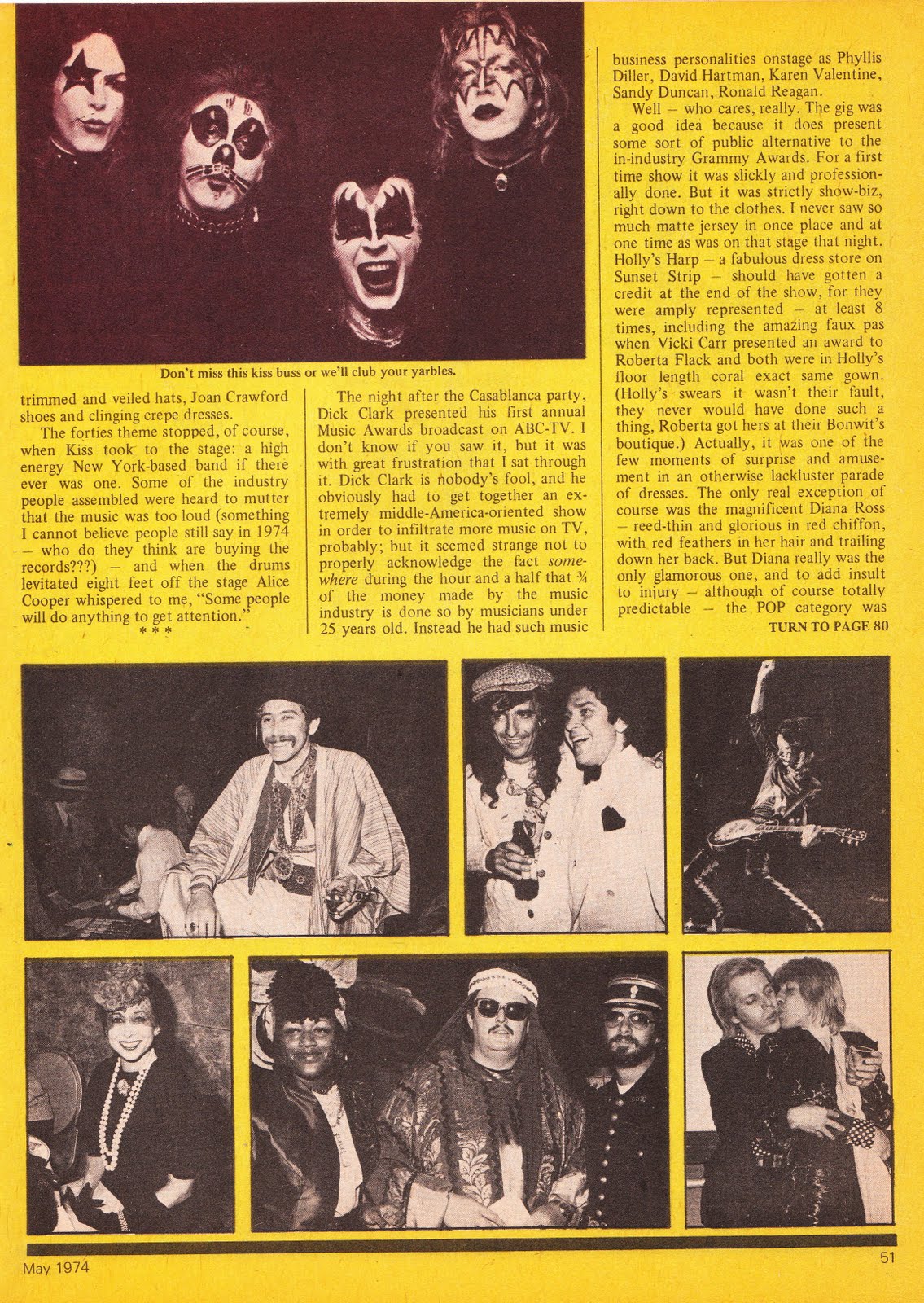 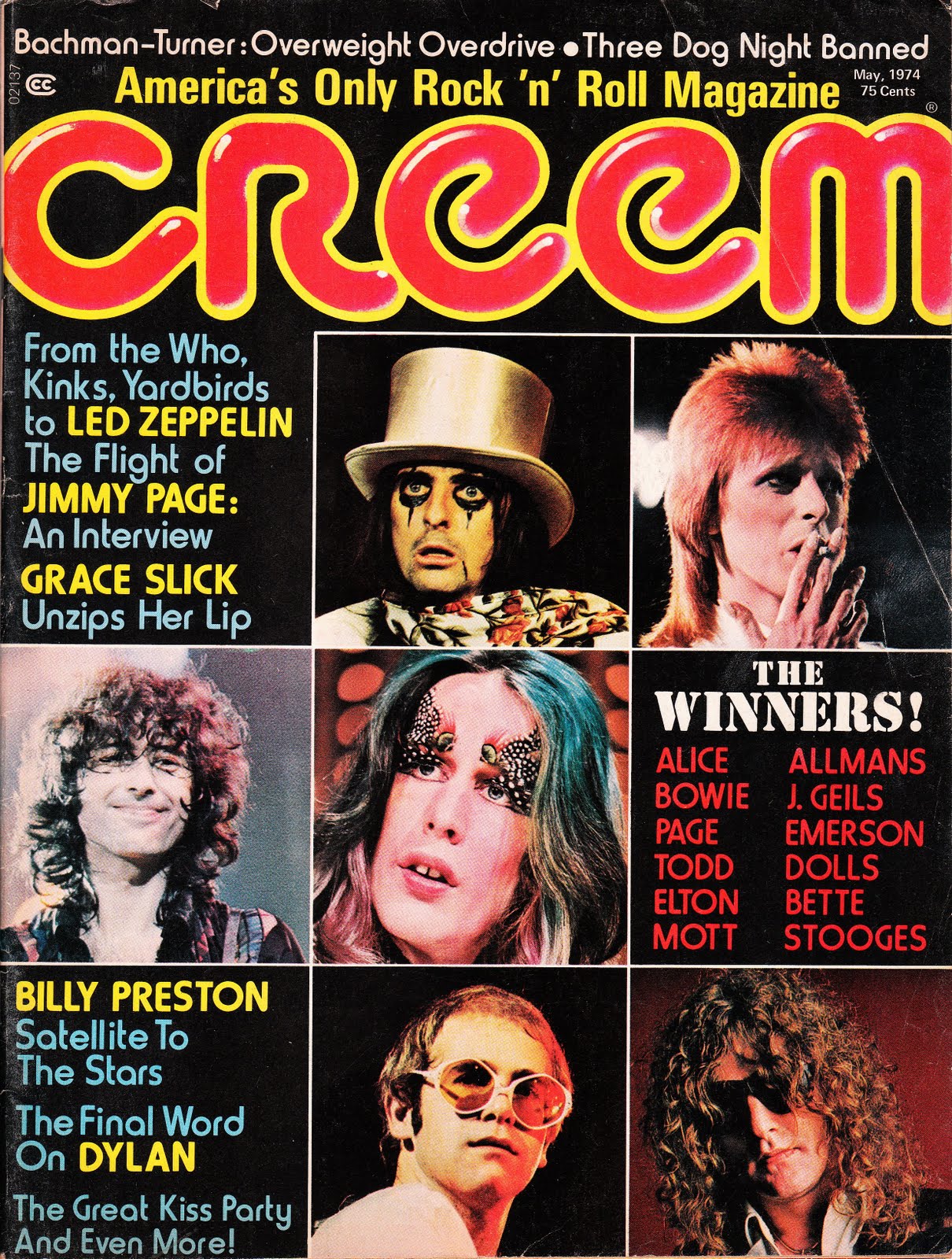 Knox on Cave/Flying Nun 1982/"Do Not Buy This Product"/Who is Bobzilla?

One of my all time favourite musicians is Chris Knox. Chris is also a great music/film critic and illustrator. Here is a 28 year old review of the Birthday Party's "Junkyard" from the barn archive which kinda says it all in approximately 200 words or less. Don't get Chris started on the Beatles or the Incredible String Band or we could be here all day. I know if Rollins reviewed this lp in '82, he would have had a hard time keeping it under 1,000 words. Please support Chris and purchase "Stroke" here. 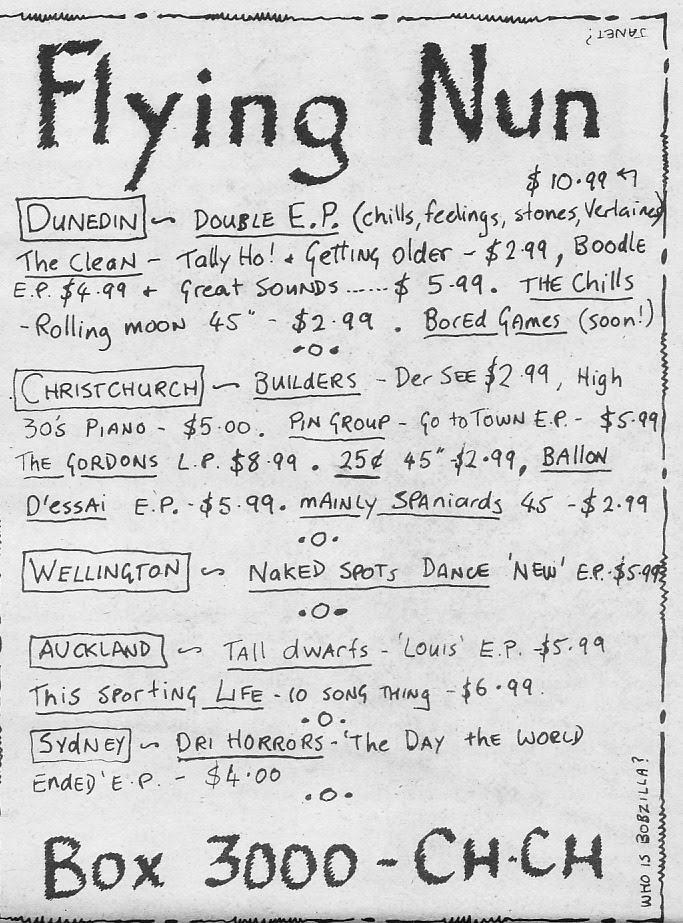 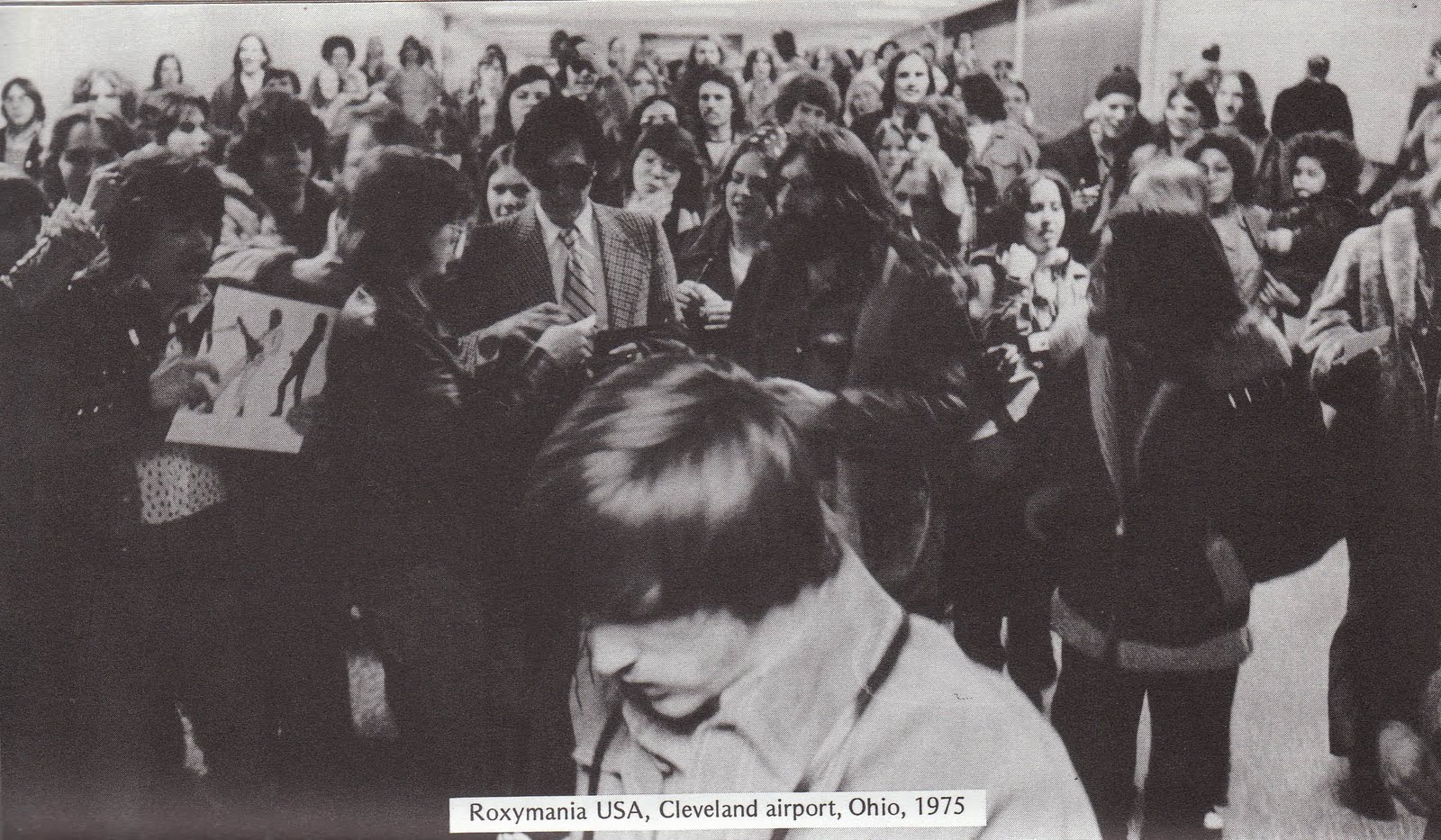 Certain cities seem to embrace foreign artists and out of town acts like hometown heroes. It just seems that Cleveland had the best taste. See Exhibit A above. CLE were amongst the "early adopters" (to borrow the parlance of the cigarette profiteers) of the Roxy/Eno axis. Exhibit B, the various live tapes of the VU at La Cave recorded by Klimek and crew.
Posted by Papa Jon at 3:59 PM No comments:

Not many people bridge our love of Masque-era punk and the golden age of the Los Angeles singer-songwriters. Judee Sill did that via her fleeting relationship with Brendan Mullen in 1975.* I remember reading Mullen’s first hand account of his brief affair with Sill several years ago (before her recent critical reappraisal, reissues and popular ascendency), and it really registered with me. The perfectly formed music almost mathematical in its construction coupled with crystalline religious/personal lyrics – nearly the only religious lyrics I can stomach in popular music outside of born-again Dylan - made by what Mullen likened to a huge, reptilian "serpentine cadaver" into Rosicrucian manuscripts and Aleister Crowley's "Snowdrops." Mullen could be describing a seduction right out of the Jimmy Page 70's playbook? And no, I am not even considering your private press, thrift store, religious lps or xian psych records. Forget the late night, “higher key” gold, “Ladies of the Canyon” folk singers. Start naming those lps and who recorded two back to back that hold up with such a consistency? I can recall not so long ago when you could still find the Sill lps in the fifty cent bins of record stores. What other Asylum artist (other than perhaps the first J.D. Souther and Clark’s “No Other”) warrants your hard earned dollars in 2010? 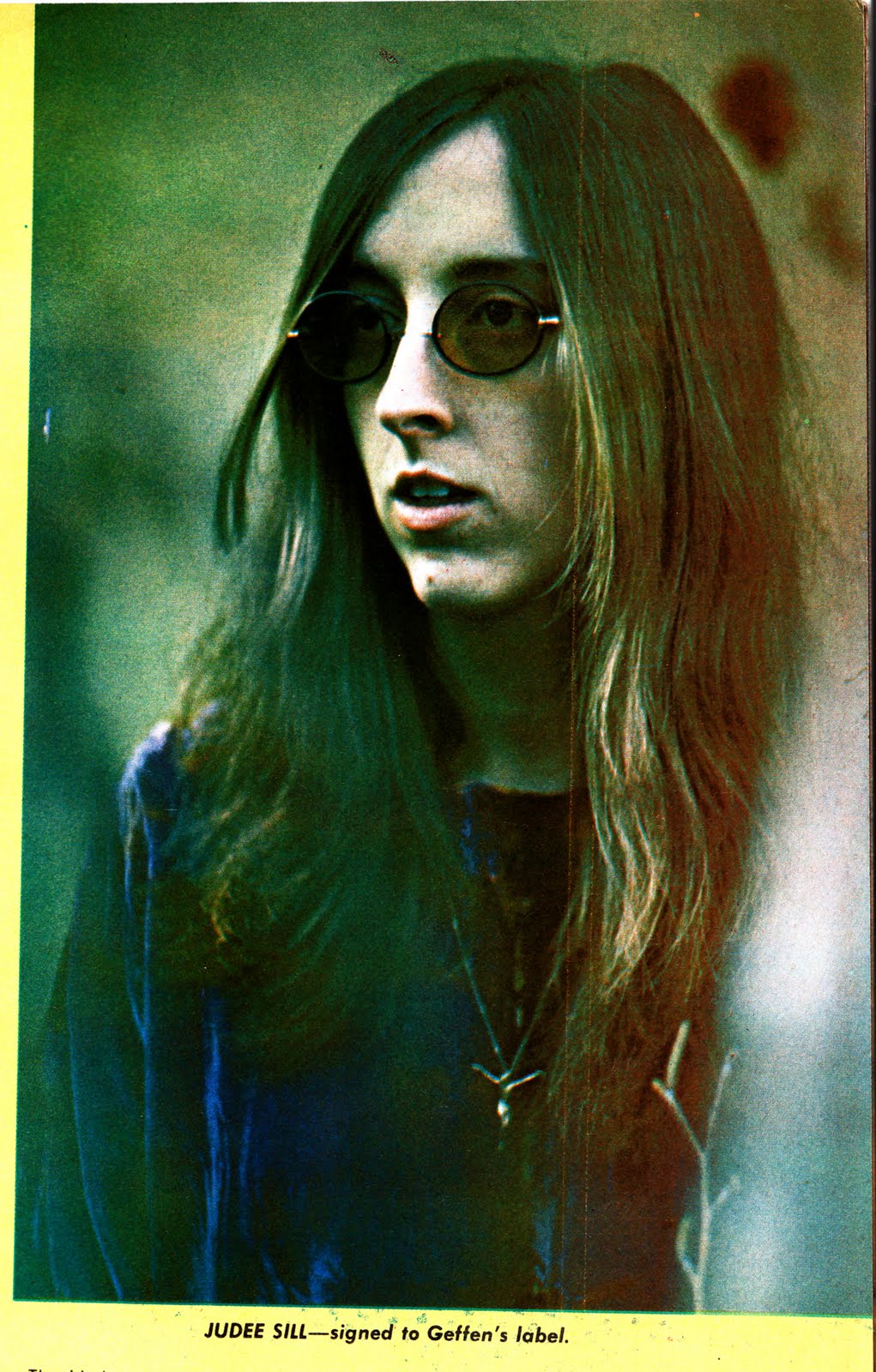 But I am getting ahead of myself here. I have been working on a biopic script of Sills life. The casting I have pitched so far includes Warren Ellis and Seth Rogan as Flo and Eddie (for "Lady-O" era Turtles) and James Franco as David Geffen. Ricky has decided I will play Graham Nash based upon my current resemblance to "Wild Tales" era Nash and my propensity to collect and take photographs. The role of Sills is the tricky proposition. I do know that whoever plays Sills will likely score Oscar gold. The story has such a tragic element to it and for me personally, the locales are all so familiar: the San Fernando Valley, bank robbing arrogant junkies, reform school musicians, prostitution, the Association and the Turtles, Encino, Echo Park, the Trobadour, Souther, Geffen, Mama Cass, Nash, Crosby and a pit stop at the Source. Think "Cisco Pike" meets "Dusty and Sweets McGee" with a sideswipe at Jacques Deray's "Un Homme est mort" (the Outside Man). 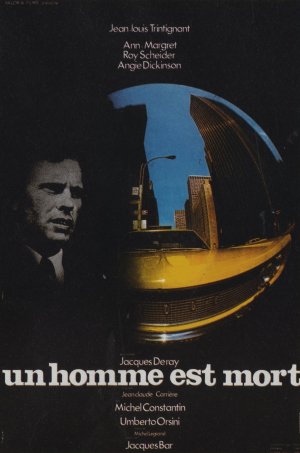 Speaking of “The Outside Man/Un homme est mort,” the Jesus freaks of Hollywood Boulevard in the early 1970’s were real and slipped into popular culture worldwide via the then current music and films. "The Outside Man" has some of the best footage of 1971 Los Angeles outside of "Cisco Pike" and "Dusty and Sweets McGee." Starring Ann-Margret, Roy Scheider, Jackie Earle Haley, Jean-Louis Trintignant and Angie Dickinson, the film goes from downtown to LAX, Beverly Hills to Hollywood Boulevard, Santa Monica to Ventura Boulevard. The still below, right there at Hollywood and Vine, shows Jean-Louis Trintignant unknowingly picking up a cartoonish, Jesus freak hitchhiker clad in all denim not long for this life. 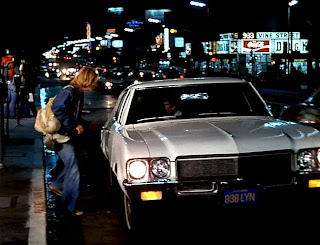 How prevalent were these folks on Hollywood Blvd, Santa Monica Blvd and the Sunset Strip? So prevalent that Bernie Taupin after EJ’s Troubadour run latched onto it with the lyrical turn that you couldn’t keep off the radio in 1971: “Jesus freaks out in the street/handing tickets out for God/ Turning back she just laughs, the boulevard is not that bad." Of course, you won’t admit knowing those lines (though Alice Bag might), but they are from “Tiny Dancer" from “Madman Across the Water." Did Geffen think that Sill could clean up with a whole lp of similar lyrics for the jesus and junk crowd?

By chance I recently read a fascinating and wide-ranging 1973 interview with David Geffen and Elliot Roberts in Hit Parader, the sister publication of Rock Scene, and was struck by the image above of Judee Sill, which I don’t think I have seen reproduced since. Seeing that image in the barn archive is what inspired the whole post really. The photo of Sill above is captioned as a Geffen signing for Asylum with no mention of her in the article at all though Geffen in the interview has some harsh words for Grand Funk Railroad and already has dollar signs in his eyes for Frey and Henley who were finished with work on their sophmore lp. GFR deserves their own post for "owning" the rock and roll world along with the Coop circa 1972-73 but are also written out of the history books or derided as mere cartoon rock. Here is a gratuitous scan of my euro 45 from the barn archive: 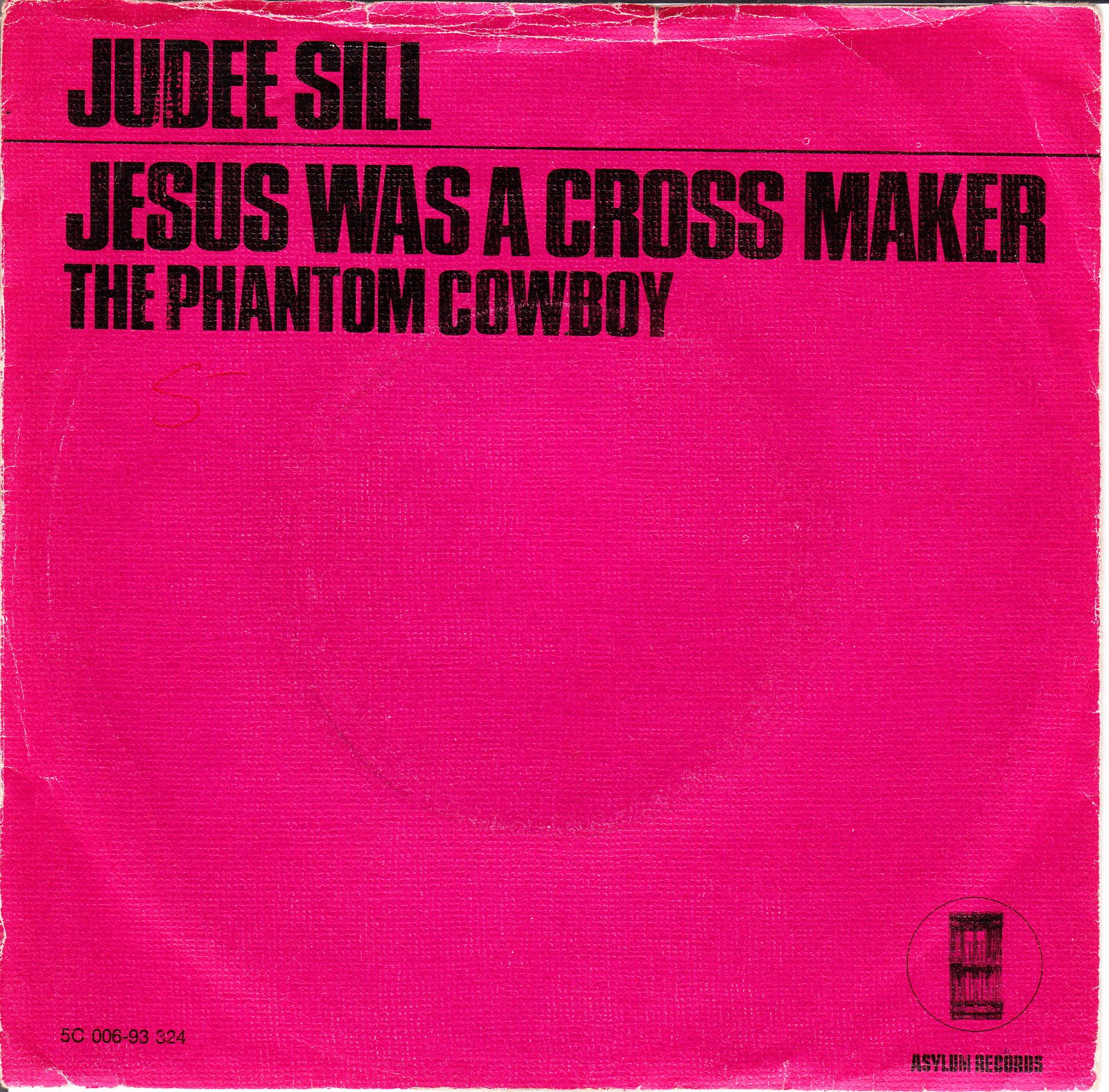 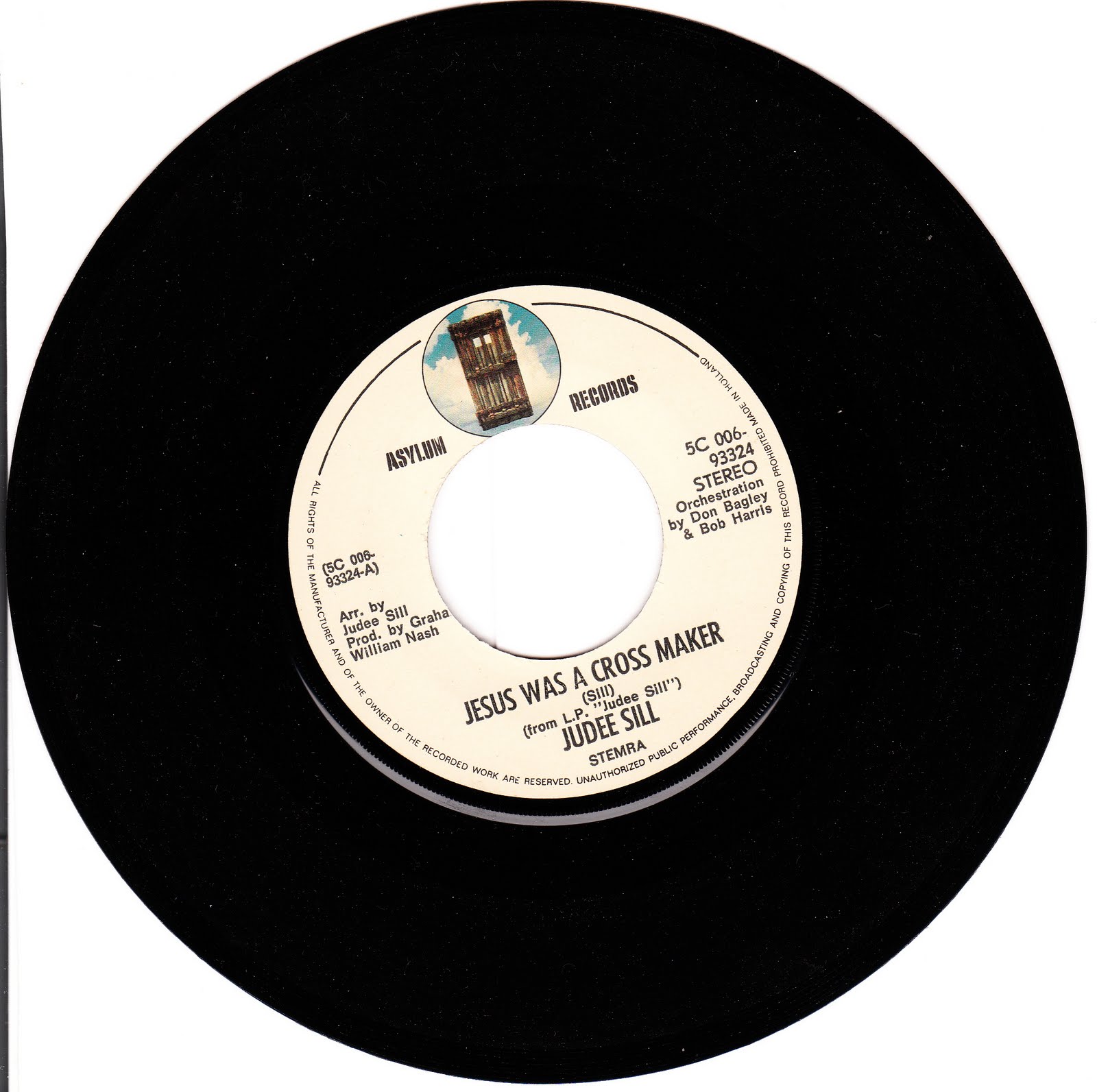 Then I finally finished Fred Goodman's "The Mansion on the Hill: Dylan, Young, Geffen, Springsteen, and the Head-on Collision of Rock and Commerce," which is highly recommended for an insight into those artists and at other times a nauseating mash note to some of the Boss' handlers. Great Dylan anectdotes and a fuller picture of Landau, John Sinclair and “Back in the USA.” I kept asking myself where the hell was Judee Sill. She's not even mentioned at all in connection with Asylum or Geffen-Roberts management which only merits mention of Young, Henley, Frey, Souther, Jackson Browne and Ned Doheney. While Goodman's tome is highly recommended for those interested in how we get from Albert Grossman to Geffen to the producer credits on "Avatar," the book by now is already totally outdated by the developments in the record industry (a footnote even discusses the profits of the consolidated dinosaur industry where the suggested retail price was $15.98 for a cd - where was Tom Petty when that price was laid on us!) Sill captured the zeitgeist of that time like few others ("Raw Power" among others). She meant it man and she lived it. The records didn’t sell, and as Goodman recounts without mentioning Sill, Geffen was mostly into personally marketing his pretty boy Eagles and Browne, rebuffed her personally as we know and the downward slide to 1979 began. Sill is also absent in the semi-recent "definitive" tome on Laurel Canyon. Where the hell is Judee Sill? Everyone pays homage to her now but she is erased until the recent reissues.

For Sill completeists here is a leftfield source. A&M recording artist and flautist Tim Weisberg is not someone I thought I would give any spotlight to on this page, but nevertheless, he had Sill and Mr. Tommy Pelteir appear on Weisberg 4. Watch how these records disappear from the 25 cents bins. What a beatific glow off that hair and backlighting!! 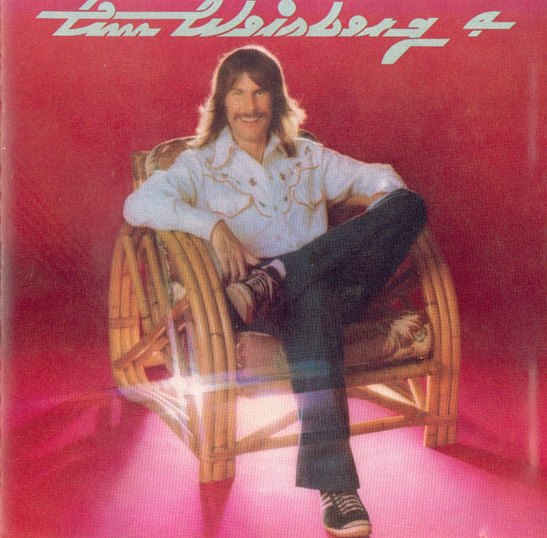 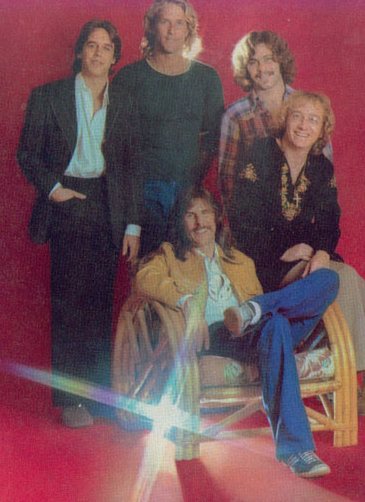 Not looking unlike the Jesus freaks out of The Outside Man," these folks allowed Sill onto their record. The results clearly speak for Sill as auteur. She owns these tracks and they sound like instrumental interludes off "Heart Food." Enjoy:

Two covers of "Jesus Was a Crossmaker." I guess Graham still had some pull with the Hollies on the "Romany" lp and then there is Mama Cass:

As soon as I can rip a version off the Hollies lp I will post it here as it is the superior cover version.
* Mullen's account has been removed from the net in recent years. Hoskyns quoted from it in his 2007 Sill profile in the Guardian. Another individual who links the Masque and the LA introspective singer-songwriter is Beck Hansen. His own work and his grandfather naming the Masque and witnessing his dad record the likes of the Screamers and the Controllers will be the subject of our future interview with Beck .
Posted by Papa Jon at 8:18 PM 8 comments: