I remember reading an interview with Iggy around the time Blah Blah Blah came out that said that he and Bowie were getting their heads cleared by surfing a lot. I guess that's why I like the fact that Iggy currently has that leathery tanned look of some surfer/beach comber in the South Bay who is riding his rusty (and probably stolen) beach cruiser by the bars near the Strand. Thanks to Waitakere Walk's old friend GR, we have been able to enjoy several South Pacific viewings of the Imperial Dogs dvd and it is a corker. Paul Therrio, guitarist extraordinaire of the Imperial Dogs, is a life long avid surfer. In my foggy vision of the 70's, beach denizens came in several camps - one genus looks like Paul and another looks like Sam Elliot in Lifeguard. This snap from Rodney's English Disco captures a ground zero moment of Iggy checking out Paul and the Dogs perform. It appears both had been hitting the beach. It is a proven fact that Iggy likes the beach (Miami is his home) and he did check out the Screamers command performance in Malibu a couple of years later at a beach house but I digress. 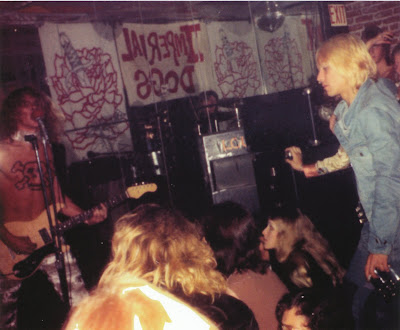 Seeing that the 1972 Sparks American Bandstand performance is not likely to appear on the net anytime soon due to Dick Clark productions, we searched if any of Sparks MK1 was captured on video on a European tour that same year. Paydirt. I saw Ron and Russell in the audience of a Brian Wilson show a couple of years ago – do you think Ron and Russell like Holland and Sunflower? I have also seen Sparks live in three decades. Wonder Girl is new wave ten years before new wave.

Historical note, in 1966, Ron & Russell appeared for a few seconds in "The Big T.N.T Show" watching the Ronettes. They also got to see at that same show Ray Charles, Petula Clark, The Lovin' Spoonful, Bo Diddley, Joan Baez, the Byrds, and Ike and Tina Turner. Hat tip for this great screen capture to Mr. R. Steevie Moore (who also graciously provided the Half Nelson demos to me some years ago).