When Alice Met Stevie and Lemmy/Hawkwind at the New York Academy of Music 1974/Gonna Have a Real Good Time Together!/"Local Talent"/Planetarium Rock

Folks said they wanted more Hawkwind so back into the barn archive for a look around. Let's see. Warhol superstars. Check. Alice Cooper. Check. Danny Fields AND Lee Black Childers. Double check. Stacia. Yep. Stevie Wonder, Cherry Vanilla and Spencer Davis. The collaboration between '74 era Wonder and Hawkwind makes the mind boggle. The competition was always interesting and the Coop was there as usual to check them out (or poach Stacia for his own stage show). Most impressed by the "local talent," uptown from checking out the Stilletos, Harlots of 42nd Street or Magic Tramps and hoping to get close to Dave Brock, Nik Turner or Lemmy. Dig Nik in full Arkestra mode! Rock Scene's bold assertion that it featured the "the stars backstage" was never truer. 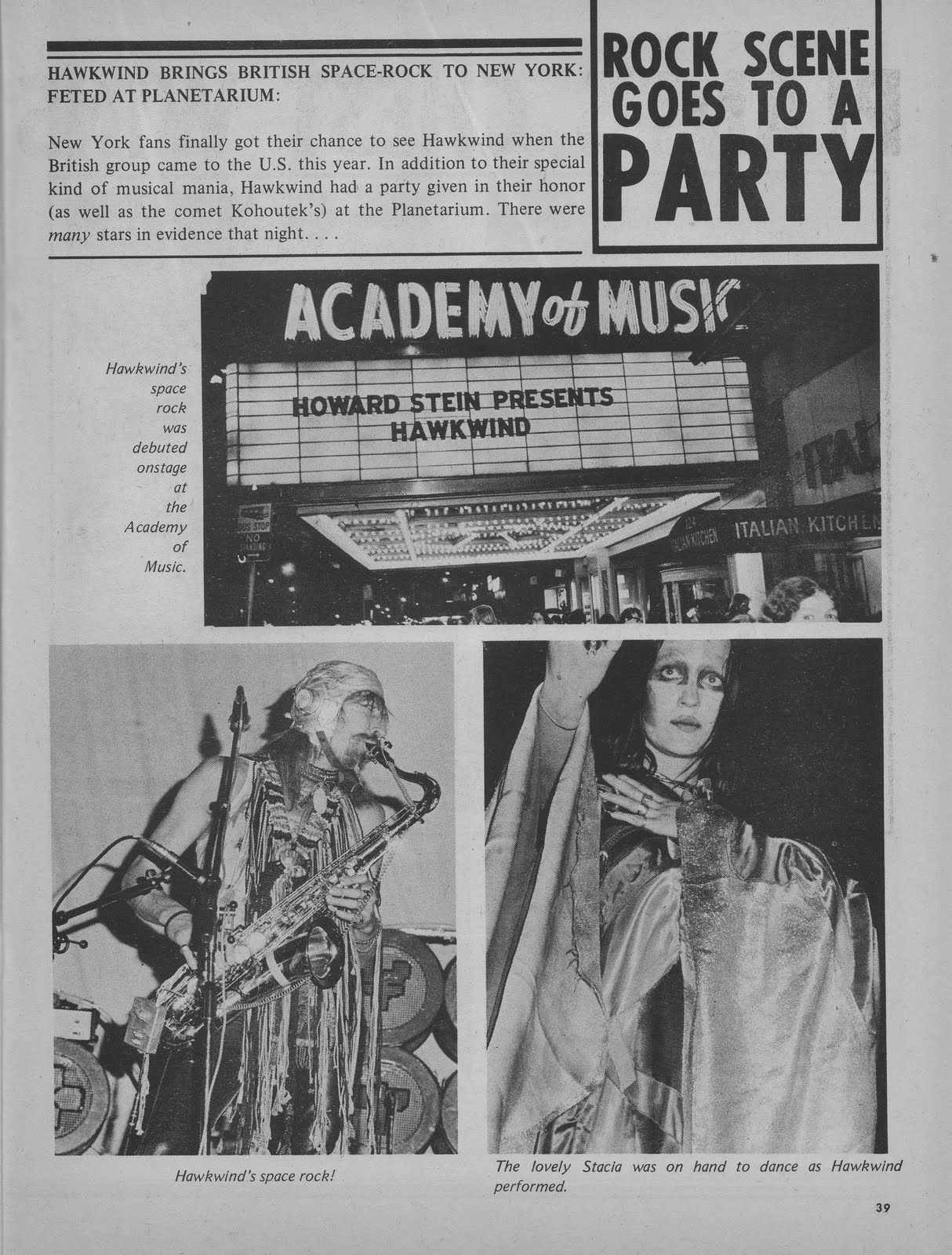 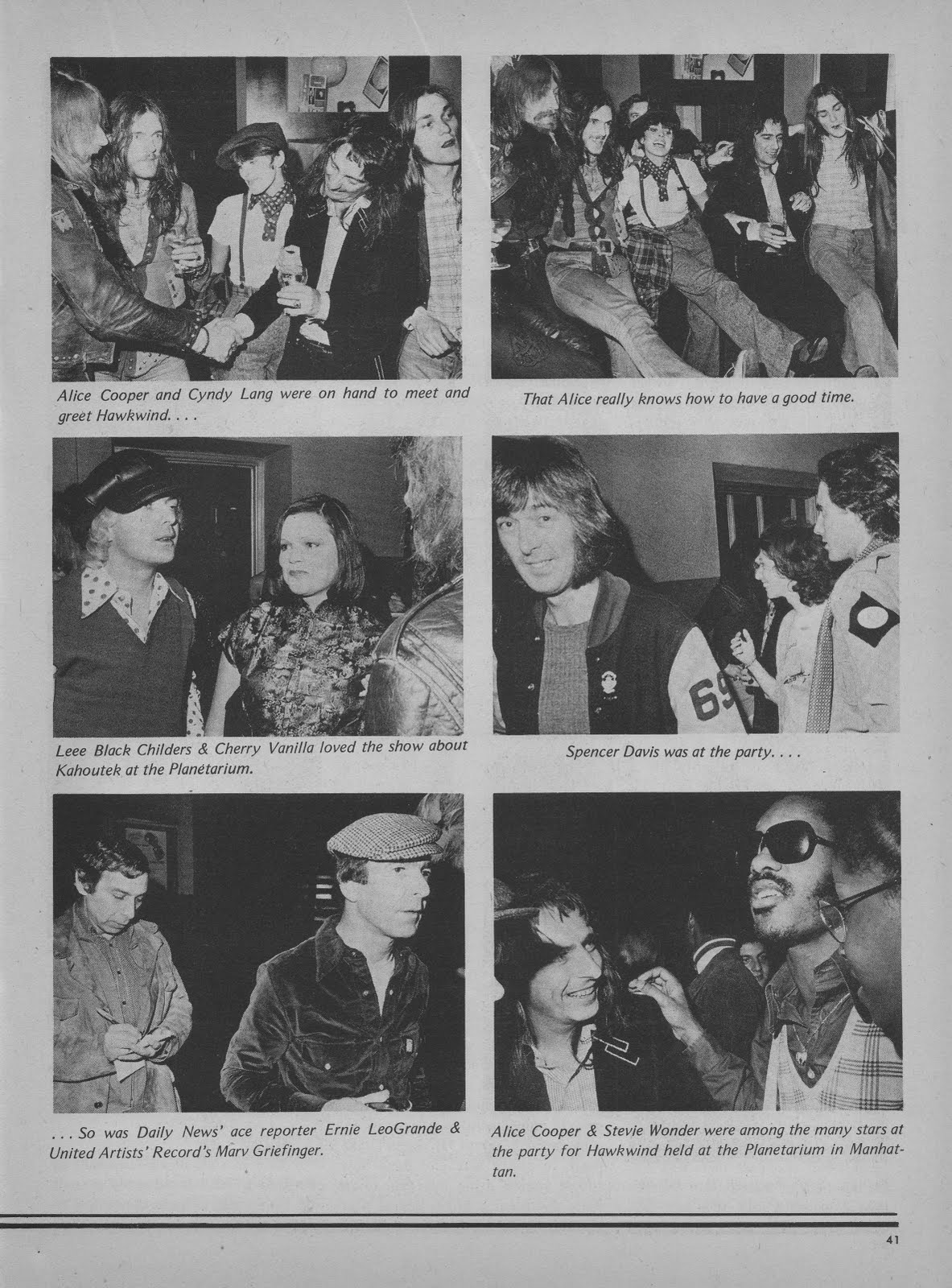 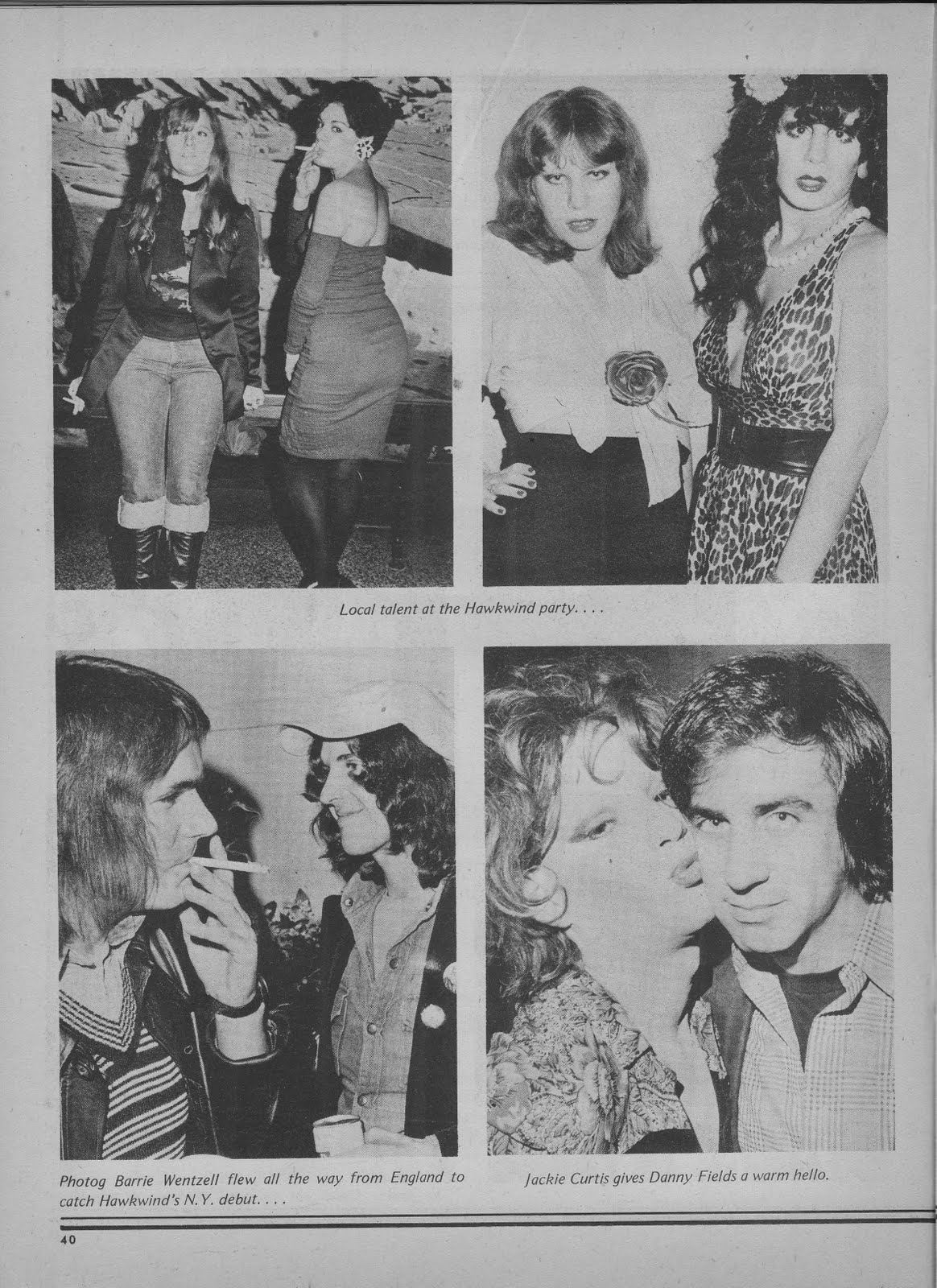 UA's Attempt to Sell Hawkwind to US Teens Circa 1972-73: Space Poet and Intergalactic Chanter/A Mindblower in the 1967 Tradition

“Like the early San Francisco bands, Hawkwind are vitally linked to the community that spawned them, the hip subculture of London’s Notting Hill district. Also in the tradition of their mid-60’s San Francisco progenitors, they’re as eager to play for love as for money, having performed free more than any other group in Britain . . ." (emphasis added). Whoever came up with this ad copy at least got it right that SF possibly peaked in '65-66. Been working on an upcoming short post on the much maligned Jefferson Airplane - just finished Gleason's 1969 trade paperback on JA in which he repeats his insipid VU trashing (why out yourself AGAIN as a MORON on the subject of the VU for a NATIONAL book as late as 1969 when nobody outside of the Bay Area read your 1966 bash in the first place and could have left it at that - was that one syndicated like his other columns?). Not a horrible book all in all but a bit fawning and self-congratulatory (surprise surprise when the subject is the JA). And yeah, please don't lump in Hawkwind with the self-important crew that RUINED the reputation of the JA try as I might to disassociate the music makers from the music (Volunteers even sounds as good to my ears as Briggs-era Royal Trux at the moment.) Anyway, as to the barn scans, I remember buying a box of various issues of Phonograph Record Magazine from 1972-1974 from Greg and Suzy Shaw about 20 years ago. Before they all fall apart, I copied some and hope to post more of my favorite reviews and ads here soon. 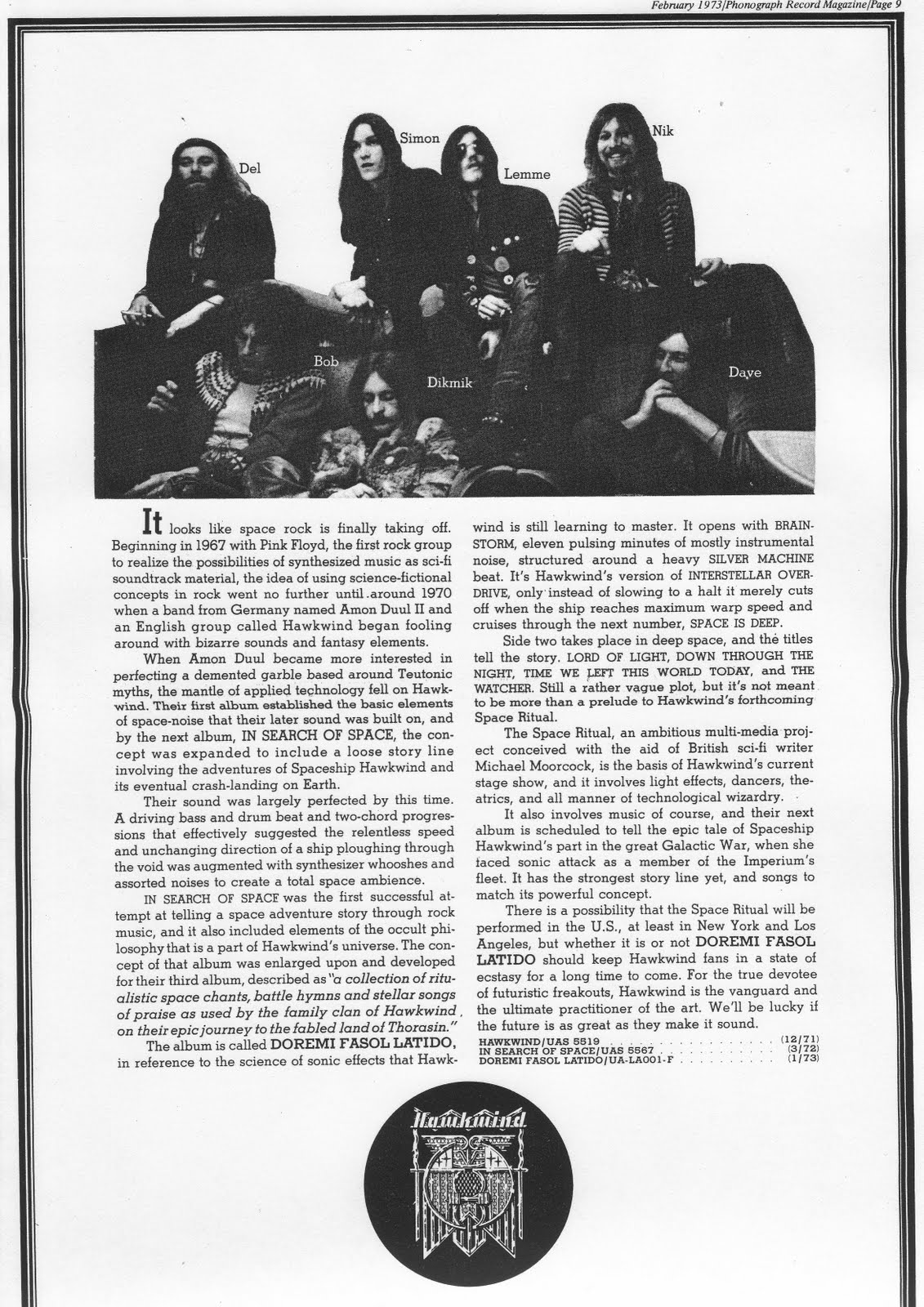 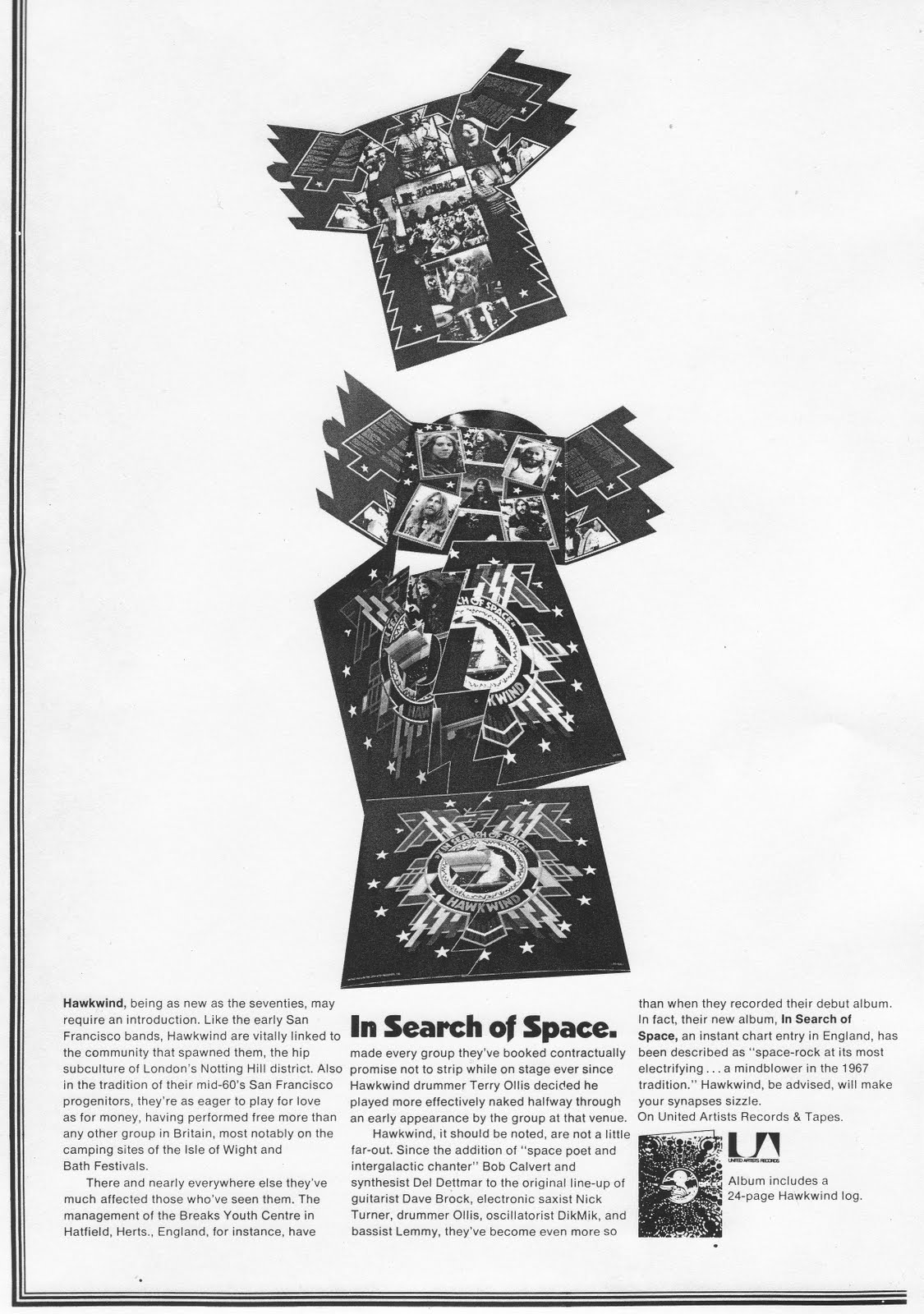 File Next to Rock and the Pop Narcotic, Get In the Van and Enter Naomi/Rock My Religion

Stop the presses as it has been pointed out to me that Byron and Thurston have published Dave Markey and Jordan Schwartz’s collected We Got Power run in far better quality than my scans can do justice to. We can’t wait to see the finished result entitled Party With Me Punker: The Early 80s Southern California Hardcore Scene. Not only that, there are apparently heaps of previously unpublished photos including the one below of the Flag and Carducci giving back to the scene with some attentive spectator participation. Let’s hope there are more candid shots of gig parking lot haircuts, Godzillas and RF7. We will see if a copy of this book makes it to the bottom of the world for a review prior to your Christmastime coffee table book purchases. You can order it here. Tip courtesy of the always interesting New Vulgate. 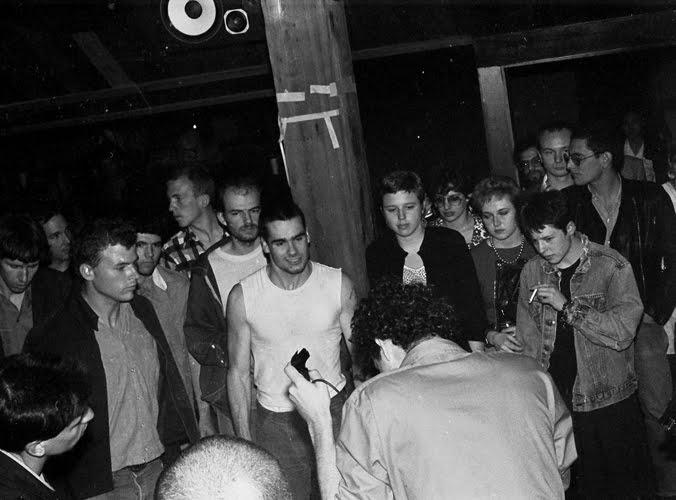 One of my all time favourite Thurston/Black Flag connections is of course Dan Graham's "Rock My Religion" and is excerpted below. I did not see it until the 1990's in its entirety but it would have connected a lot of dots vis a vis the SST/SY axis had I seen it around the time of "Evol." 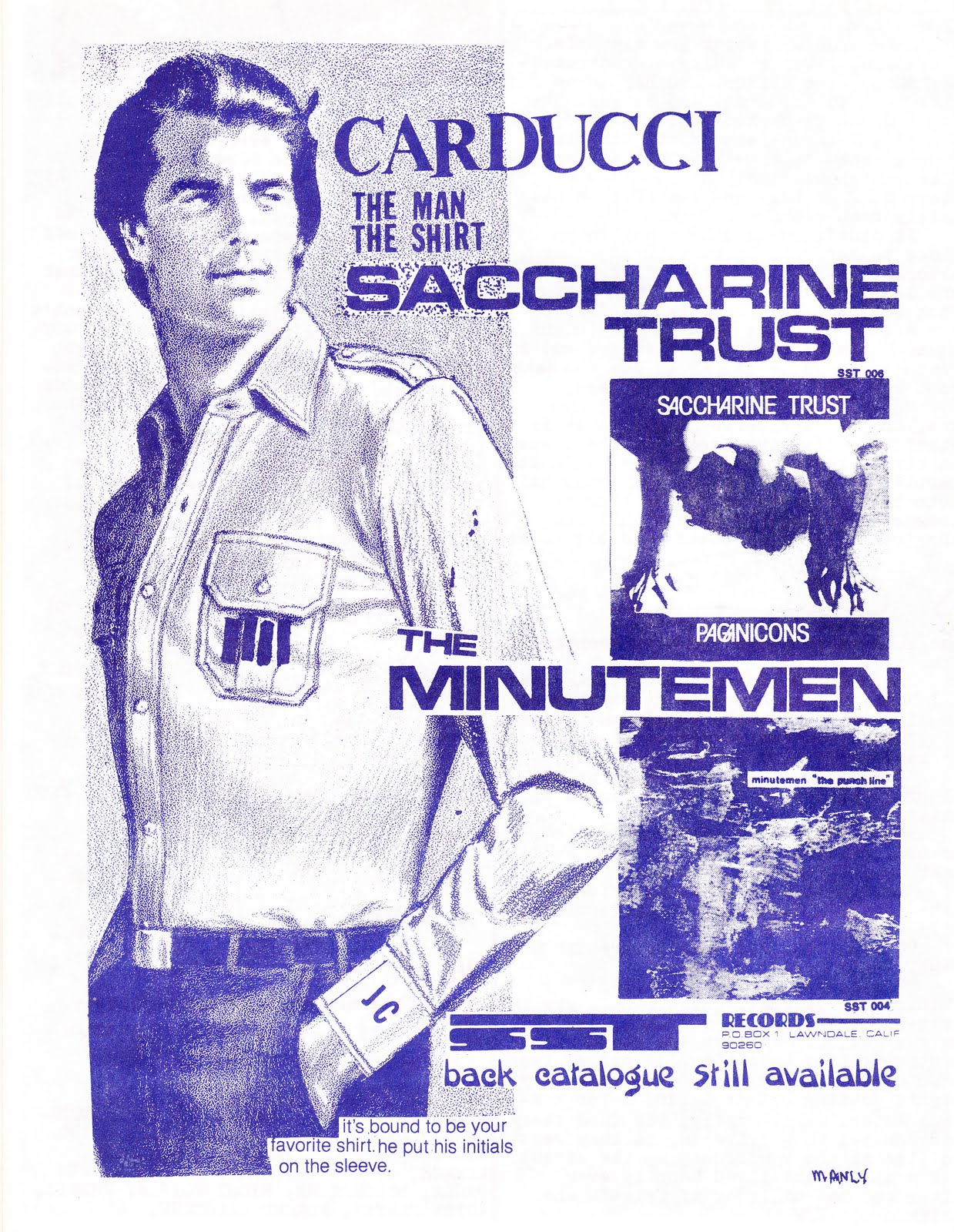 I remember as a teenager buying all the issues of We Got Power in real time as they came out from the very first issue. I found the issues again recently in the barn archive and I have to think they may be some of the only copies of We Got Power in the southern hemisphere. It has been at least 25 years since I have looked at some of the issues. It was a little like looking at a yearbook (that is if you went to school with Watt, Rollins, Schwartz, Markey, the McDonald Bros. and Julie from Sin 34). Countless hours were spent looking at them in the early 1980’s, often accompanied by the music covered in the magazine itself. I remembered all the “scene" photos/collages that were featured in early issues, that guy’s hand-stencilled Husker Du symbol on his army jacket (when all we all could find in the Valley was “Land Speed Record” w/insert for the upcoming tour dates), a youthful, pre-shaman Merrill Ward wearing a striped shirt, Danny Spira as a “prep,” full page photo of John Macias in tartan pants, Pettibon artwork, early Ed Colver photos including a memorable one of the Meat Puppets where they all looked a little like Bill Gates but more handsome and poorer. 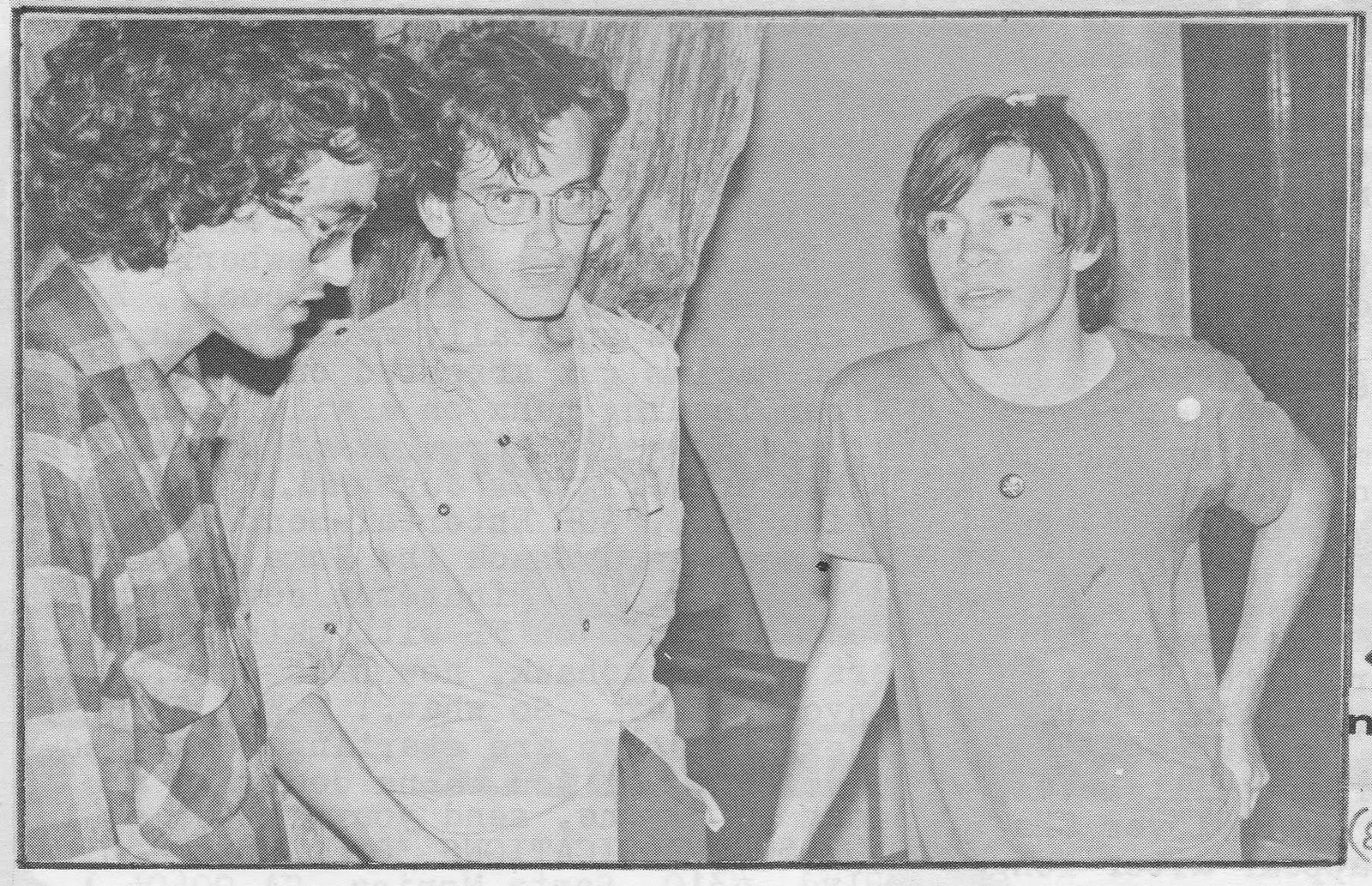 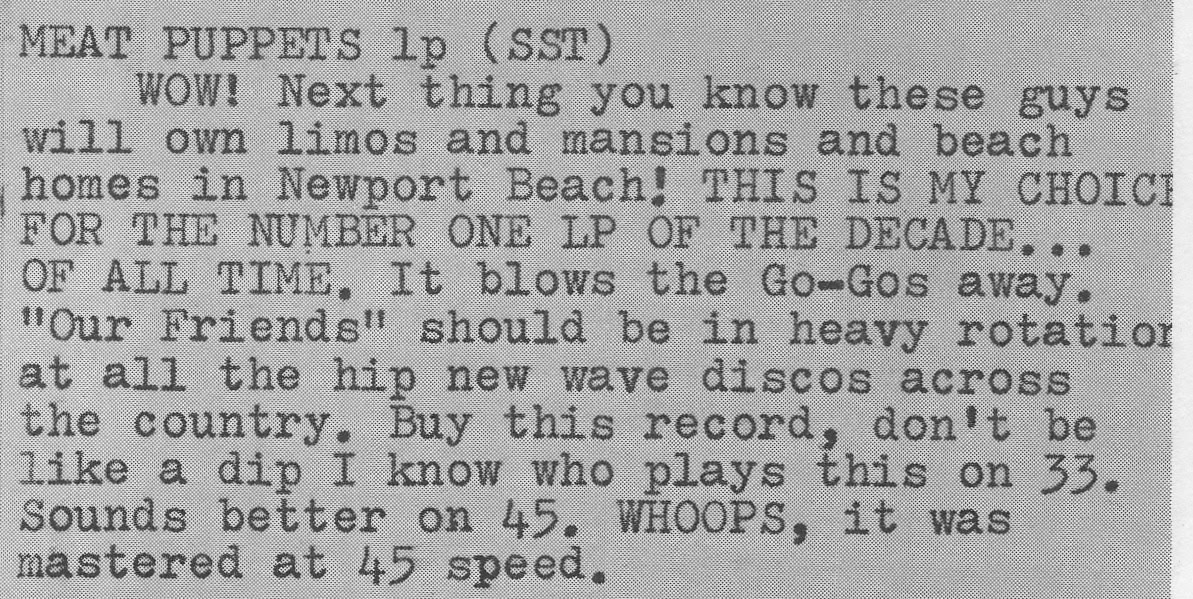 At the time, I noted that the first issue or two originated from Isla Vista, even though the coverage was mostly, or so it seemed, West LA. One image that really stood out was an SST ad for “The Punch Line” (SST 004) and “Pagan Icons” (SST 006) both of which were bought in real time prior to seeing the ad and to this day evoke many memories of being 13-14 and discovering the pure joy/intensity and intricacies of the music which opened wide other musics like free jazz and Beefheart in the near future. Air guitar to Ginn w/walkman was easy enough – Baiza was now another matter. That ad featuring the Carducci shirt was an inside joke that I didn’t get until Rock and the Pop Narcotic (the first edition) fell on me like a ton of bricks. It was an articulation of an SST-centric worldview that I held privately and shared with all but had not yet seen in print and to which I could now point others to. In retrospect, I have to acknowledge that We Got Power played a role in shaping my SSTphilia now in its third decade. When people talked about “the year punk broke,” I directed them to Rock and the Pop Narcotic, the We Got Power film empire and the review of the first Meat Puppets lp in We Got Power. It only confirmed what we already knew to be the case of the historical import of what Ginn had started in the 70’s. Enjoy Overkill live in Goleta, a collage with Watt and the always entertaining Misfits in great form from Issue No. 2 in 1982. 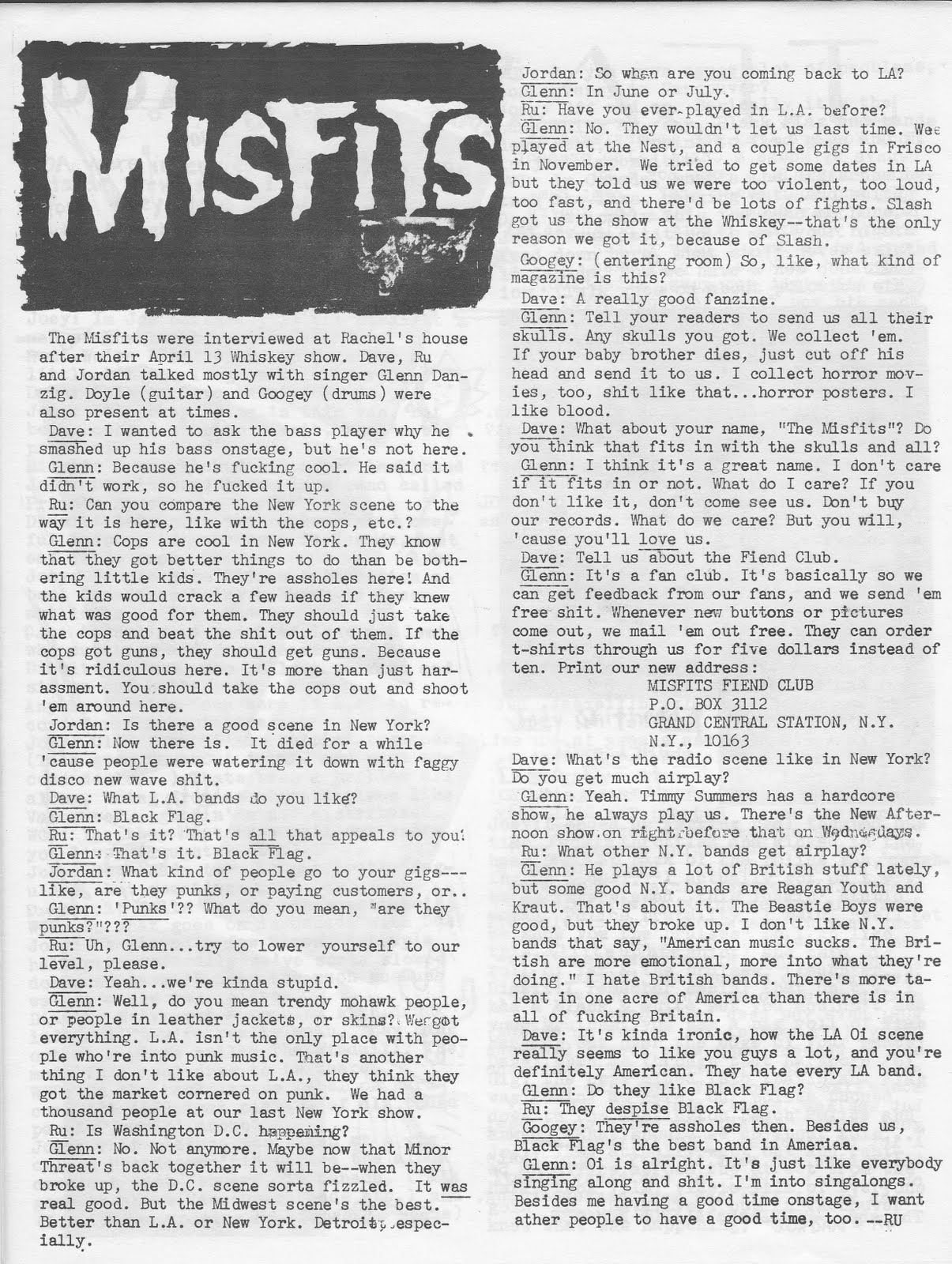 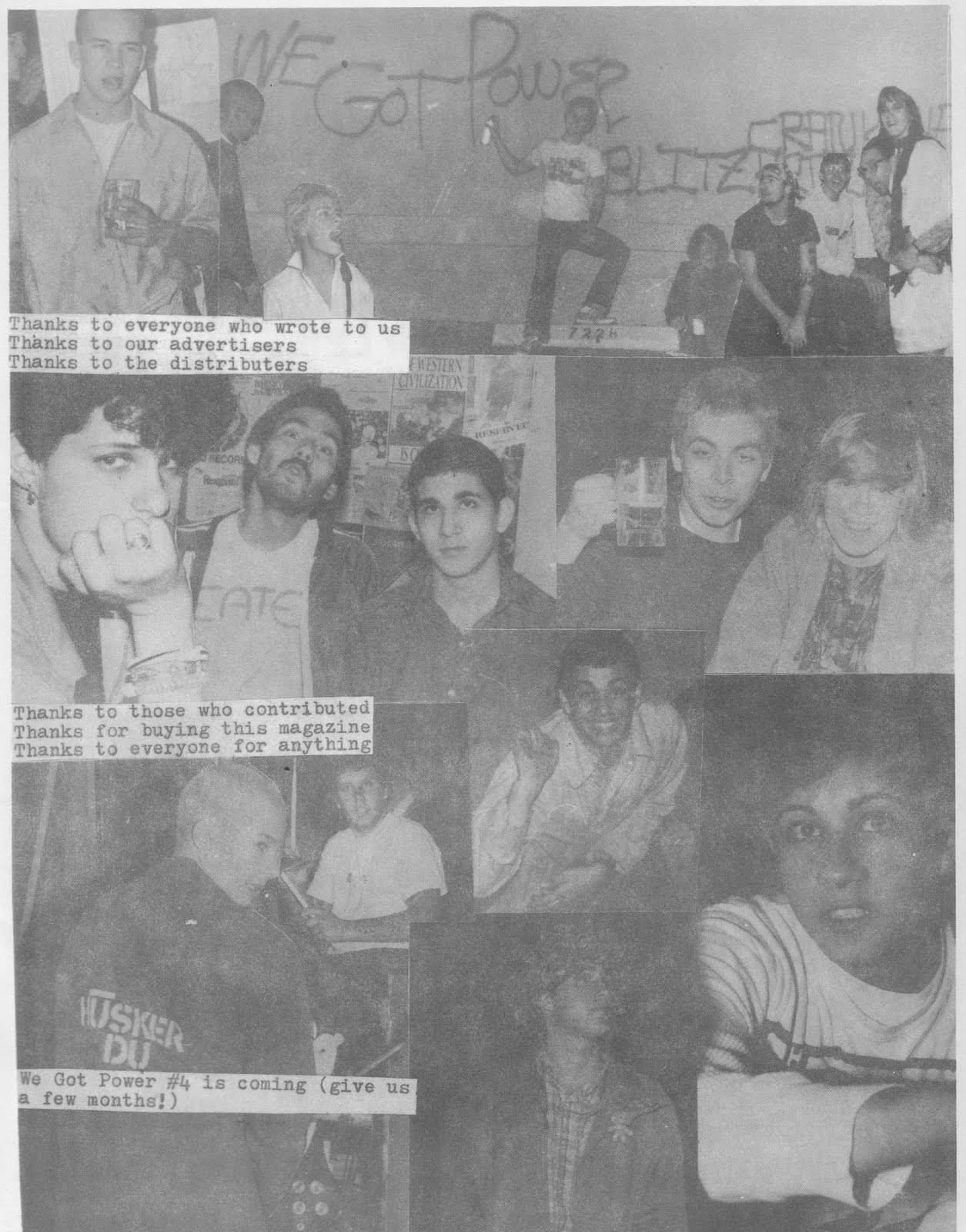